All Artists
M
MODIGLIANI, Amedeo
Nude on a Cushion 1917 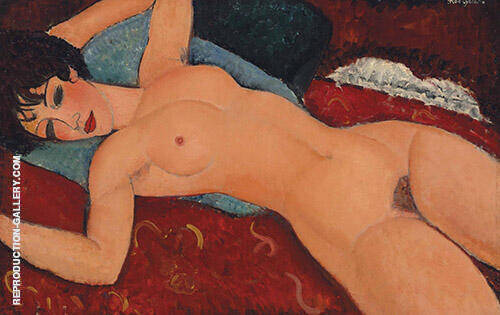 Modigliani Nude on a Cushion 1917

Painted in 1917, Nude on a Cushion is one of the most famous Amedeo Modigliani paintings.

Depicting a naked woman relaxing on a blue cushion, the painting is part of a series of Modigliani reclining nude artworks.

In the painting, the woman gazes directly at the viewer. The hints at seduction (including the woman’s slightly tilted head and open gestures) shocked art audiences.

The direct commercial and sexual nature of the artwork meant it stood out even in the Bohemian atmosphere of early twentieth century Paris.

The formal grace of Modigliani's reclining nude figures references masterpieces of the Italian renaissance such as Titian’s Venus of Urbino. Despite this inspiration, their daring bravery and unabashed realism brought the genre right into the modern age.

Modigliani’s paintings of this period are bold and brave, with little suggestion of background or setting. This made the full-frontal nudity even more shocking. The artist depicts the female body with a detached sense of objectivity. Whilst the paintings didn’t explicitly set out to provoke, they never shied away from sexuality and nudity either.

Why did Modigliani paint Nude on a Cushion?

Created between 1916 and 1919, the Modigliani nude artworks were commissioned by the art dealer Leopold Zborowski. The art dealer paid for most of Modigliani’s models, although art historians aren’t sure of the identity of the woman in Nude on a Cushion.

When the portraits were first displayed in Paris, the exhibition (held at Galerie Berthe Weill) was shut down for public obscenity. This was Modigliani’s first and last public exhibition.

Modigliani painted three portraits of Zborowski in total, with one selling for just under $1,500,000 dollars at Sotheby’s auction house in 2003.

Zborowski became Modigliani’s main art dealer and confidante during his later years. He helped the artist arrange numerous exhibitions and allowed Modigliani to use his house as a studio.

Whilst painting at Zborowski’s home, Modigliani gave his models considerable freedom to choose their own poses. He also painted his wife (Jeanne Hébuterne) many times during this period, though never in the nude.

Where is Modigliani’s Nude on a Cushion?

The painting now hangs in a private collection. It realized a sale price of over $170,000,000 at a 2015 Christie’s sale in 2015. This remains a record for Modigliani sale prices, placing the artwork amongst the most expensive paintings in the world. The buyer was Chinese businessperson Liu Yiqian.

As Modigliani’s primary art dealer, Zborowski amassed a large fortune selling and commissioning his art (especially Modigliani nude paintings). Despite this, he lost much of his wealth during the Great Depression and died destitute in Paris in the 1930s. Zborowski’s considerable Modigliani collection was consequently sold, now dispersed all over the world.

Today, Modigliani is one of the most famous Italian painters. His works (associated with Expressionism and Cubism) are highly sought after by collectors and the general public alike. His scandalous yet groundbreaking nude portraits reinvigorated the genre as a leading subject of modern art.

For this reason, Modigliani style portraits remain some of the most reproduced artworks to this day

WHO IS AMEDEO MODIGLIANI?

Amedeo Modigliani was born in Livorno, Italy, on 12 July 1884. He was an Italian Expressionist painter and sculptor who was especially well known for his nude paintings and portraits.

Although he was not a popular artist in his own lifetime, Modigliani’s reclining nude paintings have created auction house records and are amongst the most expensive paintings ever sold.

Amedeo Modigliani modern art paintings are some of the most recognizable artworks in the world.

Modigliani parents were a prosperous Sephardic Jewish family. His father, Flaminio, was a successful mining engineer. His mother, Eugenie, also Sephardic, came from a family of money lenders from Marseille. They had businesses in Livorno, Marseille, Tunis and London.

A drop in metal prices meant that at the time of his birth, the Modigliani family was bankrupt, although his mother founded a school that became commercially prosperous.

Amedeo Modigliani was a sickly child and was taught at home in his early years.

He always wanted to be a painter. After he had recovered from typhoid, his mother took him to Florence to visit museums and then enrolled him in the school of Guglielmo Micheli, the best painting master in Livorno.  Modigliani studied Renaissance Art at Micheli’s art school from 1889 to 1900. However, his studies were curtailed after he contracted tuberculosis. It was this disease that eventually killed him.

In Rome in 1901, he admired the work of Domenico Morelli. Morelli was part of a group of artists known as the Macchiaioli, coming from the Italian word for “a splash of color”. This Group pre-dated the French Impressionists. During this period, Modigliani created landscape, portraiture, still life and nude paintings.

In 1902, Amedeo Modigliani enrolled in the Scuola Libera di Nudo, which formed part of the Accademia di Belle Ari in Florence. From there he moved to Venice to study.

However, after yet another bout of tuberculosis, his mother took him away from Venice to the island of Capri, where she hoped the cleaner sea air would help him recover.

In 1906, Modigliani moved to Paris. Whilst his relatively affluent family background meant that he was able to afford to rent a studio in a more prosperous part of the city, he became a squatter in an artists’ commune in Montmartre.

Within a year, Modigliani became an alcoholic and drug addict. He cultivated this persona to mask his increasingly worse tuberculosis episodes. The disease was the biggest killer in France at the time, and those who had it were feared and avoided.

However, by contrast, being a drunk and a drug user, and an artist, was very much more acceptable.

At first Modigliani was influenced by Henri de Toulouse-Lautrec, but in 1907 he became enamored by the work of Paul Cezanne. Through the influence of these artists, Modigliani developed his own unique style, for which is he is so famous today.

Back in Paris in 1909 after a return home to Livorno, Modigliani concentrated on his sculptures. It was here that he created a limestone carving of a woman’s head, called Tete, with clear African influences. In June 2010, Tete was sold for $52 million, making it one of the most expensive sculptures ever sold.

In 1916, Modigliani met the dealer Leopold Zborowski. Zborowski became both a friend and mentor and it was during the three year period from 1916 – 1919, that Modigliani painted many of  his famous nude paintings. Modigliani’s nude painting constitute some of his best-known artworks.

The most famous of the Amedeo Modigliani portraits in this series of several dozen nudes is Nu Couche, which sold at auction in New York in 2015 for $170 million, a record for Modigliani art, and also one of the most expensive paintings ever sold.

Reclining Nude, 1917 is held by the Metropolitan Museum of Art in New York, Nu Couche – Nude Looking Over Her Right Shoulder was sold to a private collector in 2018.

Modigliani painted many portraits of his contemporary artists and friends while in Paris, including portraits of Chaim Soutine, Pablo Picasso, Diego Rivera, Juan Gris and Jean Cocteau.

It was the Russian sculptor, Chan Orloff, who introduced Modigliani to a young 19-year-old art student by the name of Jeanne Hebuterne. Within a year Modigliani and Hebuterne were living together as man and wife.

The couple had a circle of friends which included other famous artists such as Picasso, Renoir, de Chirico and the French fauve artist, Andre Derain.

HOW MANY PAINTINGS DID MODIGLIANI PAINT?

Modigliani is known to have been a very prolific artist and is recorded as sketching over 100 drawings a day in his most active years. He was also known to have been very self-critical and destroyed most of his early works. In all, there are estimated to be over 300 of his paintings in existence, although this is frequently disputed as Modigliani is also one of the most forged artists. It is known that Modigliani gave paintings to girlfriends. These paintings then became lost or destroyed after they were sold to pay for drink or drugs.

After many years of suffering from tuberculosis, alcoholism and drug abuse, Amedeo Modigliani died of his illness in January 1920. There was a huge funeral attended by the art communities of Montmartre and Montparnasse. Jeanne Hebuterne, was at the time eight months pregnant with their second child. After the funeral she threw herself out of a 5th floor window at her parents’ house, killing both her and their unborn child.

Since his death Modigliani’s reputation has increased to the point where there have been nine novels, a play, a documentary and three movies about his life.

Nude on a Cushion 1917
By Amedeo Modigliani