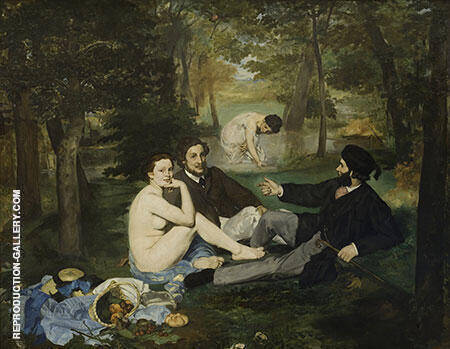 Le dejeuner sur l'herbe is a famous oil painting, completed in 1863. Often referred to by the English translation, Luncheon on the Grass, the oil painting was initially titled Le Bain (translating as “The Bath”).

What does Manet’s Luncheon on the Grass represent?

Edouard Manet Luncheon on the Grass represents a nude female having lunch with two male companions. In the relatively dark scene, her body shines brightly, directly drawing the viewer’s attention to her gaze and physique.

The two men appear deep in conversation, seemingly ignoring the nude woman. In front of the trio, a collection of objects is visible. These consist of items such as the woman’s discarded clothes and fruit and bread depicted in the still life tradition.

Most intriguing, however, another female appears in the scene. Located behind the group, a lightly dressed woman washes in a stream. It’s a dreamlike image, encouraging the viewer to question the reality of her presence. Furthermore, her large form overshadows the other figures, creating an impression this ghostly figure floats above the scene.

While the brushwork in the foreground is precise, the background has loose brushstrokes, a carefully considered artistic decision. The forest’s lack of creative depth suggests the scene was not an accurate outdoors observation but rather a meticulously constructed studio scene.

Furthermore, the use of studio lighting magnified the surreal quality of the painting. The careful observer will note the almost complete lack of shadows. Supporting this interpretation, the man sitting on the right-hand side of the composition also wears a tasseled flat cap. During the nineteenth century, men only wore these hats indoors.

This man's likeness combines Manet’s two brothers: Eugène and Gustave Manet. The other man closely resembles his brother-in-law, Ferdinand Leenhoff. In this way, the work formed a rather unusual family portrait.

Why is the woman naked in the Luncheon on the Grass?

There are many theories regarding why Manet depicted a fully nude woman in Luncheon on the Grass. Theories range from contrasting masculine and feminine qualities, a commentary on power dynamics, experience and innocence, light and dark, and even reinforcing the apparent social differences between the two clothed men and the naked woman.

In this latter interpretation, the woman’s presence could be a criticism of contemporary Parisian society. In a rapidly industrializing nation, the gap between rich and poor widened. This social and economic injustice worsened with the entrenched French class system and deep conservativism amongst Parisian upper classes.

Whatever the reason for her nudity, we know the woman was Victorine Meurent. A favorite model of Manet, he painted her frequently throughout his career. She also appears in another famous Manet nude artwork, Olympia (1863).

In both oil paintings on canvas, she looks directly at the viewer. Yet, it’s unclear whether she challenges, welcomes, or rebukes our gaze. Does she invite us deeper into the scene or gaze outside the pictorial space?

In this way, the woman’s internal contemplation (as well as her nudity) becomes a vital feature of the painting and its impact on the viewer.

We know little about Manet’s reasons for painting Luncheon on the Grass.

For instance, it’s unknown exactly when Manet commenced work, only that this was sometime during 1862 or 1863. In addition, Manet left no preparatory sketches or notebooks discussing the painting.

However, this work held personal significance for the artist.   Edouard Manet chose a vast canvas (208 by 264 centimeters) at considerable personal cost. In this era, large canvases were traditionally reserved for mythological or biblical subjects.

As well as subverting compositional expectations, Manet broke with the classicism favored in France at the time. He didn’t blend his brushstrokes or carefully mix paints. Indeed, even contemporary observers note some areas of the painting appear unfinished.

Furthermore, Manet creates the impression of a natural, life-like woman staring back at the viewer. The blemishes on her skin are visible, and her face possesses a true sense of personality and individuality. Comparing the flawless and heavily stylized nude paintings by French artists Ingres or Cabanel, Manet’s pioneering approach is straightforward.

Another interpretation of the work furthers Manet’s determination to remain faithful to reality. For example, it could depict prostitution, an activity rife at the Bois de Boulogne, a large park far from Manet’s home and studio.

This prostitution (with many upper-class men forming the clientele) was well-known in Parisian society. Nonetheless, prostitution was too controversial a topic for direct painterly representation.

What was so shocking about Edouard Manet Luncheon on the Grass?

The representation of a nude woman sitting casually and enjoying lunch with two well-dressed men scandalized French society. Indeed, it’s an image retaining its power to shock and surprise, even today.

While some contemporaries (for instance, Émile Zola) argued on behalf of the work, the French artistic establishment considered it too shocking for acceptance in the traditional Paris Salon.

Indeed, Manet initially submitted the work for display at the Salon of the Académie des Beaux-Arts. After its rejection, however, he opted for presentation at the Salon des Refusés. Here, the painting became a cause célèbre. Critics either warmly praised or scathingly condemned the painting.

Some claimed Manet’s brushwork appeared underdeveloped, whereas others claimed it lacked sincerity and even described Manet’s painting technique as “flabby.” While one critic described the nude woman as “ugly,” another criticized one of the men for not taking off his “horrible, padded hat.”

On the other hand, some critics praised the vivid depiction of a countryside scene and Manet’s expert coloring and energetic composition. Émile Zola described Le dejeuner sur l'herbe as the greatest work of Edouard Manet.”

He claimed Manet realized the “dream of all painters” to represent figures with “natural grandeur” amid a landscape. Zola also criticized social hypocrisy by pointing out the plethora of celebrated classical artworks in the Louvre Gallery depicting nude women with clothed figures.

Where is Manet’s Luncheon on the Grass?

The “real” location of Luncheon on the Grass remains hotly contested. Most art historians argue the landscape represents l'Île Saint-Ouen, however.

An idyllic spot, this was just a short distance along the Seine river from Manet’s family home in Gennevilliers (located in the north-western suburbs of Paris).

In terms of the painting’s physical location, Le Déjeuner sur l’herbe remained in Manet’s possession until 1878. Purchased by Jean-Baptiste Faure (a celebrated French opera singer and art collector) for just 2,600 Francs, it stayed in private collections for many years.

Le dejeuner sur l'herbe now hangs at the Musée d'Orsay. A smaller version (likely created by Manet as a study) resides in the Courtauld Gallery, London.