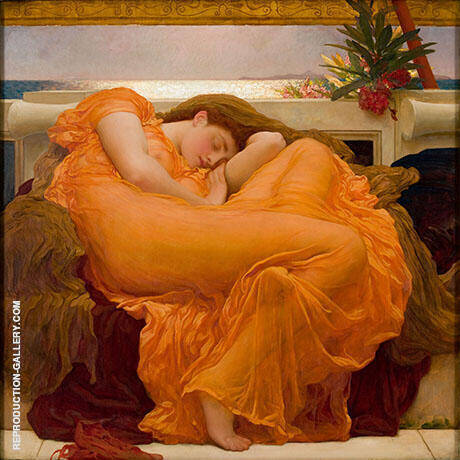 Frederic Lord Leighton's Flaming June is widely acknowledged as his magnum opus. Leighton was one of the most famous artists of the 19th century, and this is his most famous portrait painting.

As Leighton’s career-defining masterpiece, it represents the pinnacle of Victorian Neo-Classical art.

The artist's original intention was that Flaming June would form part of another Frederic Leighton artwork, Summer Slumber. In this painting, the figure of Flaming June would have appeared as a decoration on the side of a marble bath. While working on preparatory sketches, however, Leighton loved this element so much, that he turned the figure into, a full-scale portrait.

The sitter’s pose bears some echos of Michelangelo’s Night statue in the Medici tombs of Florence. Leighton regarded Michelangelo’s sculptures as a “supreme achievement” of Western Art. However, the pose proved problematic to draw, and Leighton produced several preparatory sketches in various positions. Of these initial sketches, four are nude, and one is semi-clothed.

The realism of the woman’s transparent draped dress has since stunned art critics and the public. As well as her clothing, the rich jewel-like colors, stunningly detailed marble, and natural lighting are exemplary. Samuel Courtauld (founder of the UK’s London-based Courtauld Gallery) even described the artwork as “the most wonderful painting in existence.”

Who was the model for the Flaming June painting?

Debate rages amongst art historians as to the exact identity of the sitter. Scholars believe the woman was either Dorothy Dene or May Lloyd. Both Dene and Lloyd were favorite muses of Leighton during the 1890s.

Most art historians argue that May Lloyd is the most likely candidate.   Lloyd began modeling for Leighton in the early 1890s. She also posed for the paintings Lachrymae and Twixt Hope and Fear, painted around the same time as Flaming June.

May Lord was the daughter of a respectable yet impoverished country family.  She traveled to London as a young woman and developed an immensely successful modeling career.

Notably, she only posed for heads and hands (instead of complete nude modeling). Scholars consequently believe the body is perhaps even Dorothy Dene.

Whatever her identity, the woman represents Greek mythological figures. The figure particularly references sleeping nymphs.  At the top right of the canvas, a poisonous oleander (or “Nerium”) branch is visible, further adding to the symbolism of the painting by distinctly linking slumber and the afterlife.

Is Flaming June a Pre-Raphaelite painting?

Sir Frederic Leighton’s artworks depicted historical, biblical, and classical subjects.  While Leighton was familiar with the movement, he was not primarily a Pre-Raphaelite artist.

All of Frederic Leighton’s oil paintings (with Flaming June no exception) employed a strictly academic style. Influenced by the French Academy, the movement expounded well-established principles of Neo-Classicism and Romanticism.

Leighton frequently socialized with Pre-Raphaelite painters and the crème de la crème of Victorian avant-garde society.  He collaborated with the playwright and poet Robert Browning and notably designed Elizabeth Barrett Browning’s tomb in the English Cemetery in Florence.

Flaming June, with her diaphanous flowing gown, is one of the most beautiful oil painting reproductions we offer online. 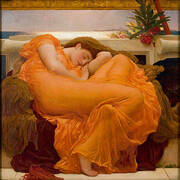