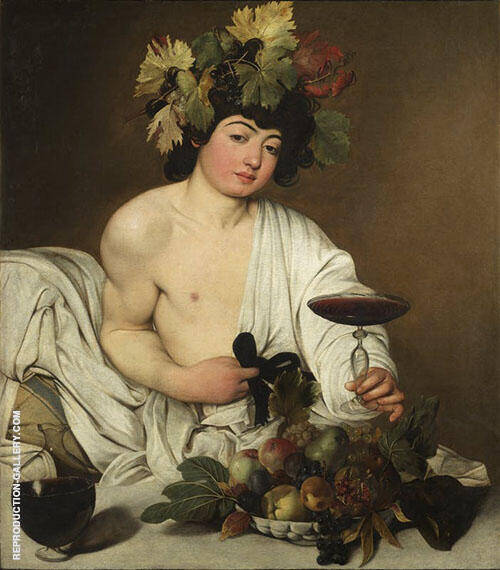 Caravaggio's Bacchus painting c1596 is a true masterpiece. It depicts a young Bacchus, leisurely reclining surrounded by fruits, grapes, wine, and draped fabric. Gazing seductively at the viewer, he holds a large glass of red wine, inviting our company.

Who was Bacchus in Roman mythology?

Also known as Dionysus, Bacchus was the Greek and Roman god of wine. He was also the god of drunkenness, theater, festivities, and fertility. While Bacchus was good-natured to those in his favor, he was nasty and cruel to others.

In addition, Bacchus also represented insanity, ritual madness, and religious ecstasy. The frenzy he induced in followers was known as "bakkheia." Indeed, both the Greeks and Romans believed the wine, dancing, and music of Bacchus freed followers from self-consciousness and restraint. Moreover, he liberated people from social norms and conventions, welcoming freedom and liberty.

In Roman mythology, Bacchus is the "Liber Pater." Translated as the "Free Father," this figure oversaw the famous Liberalia festival. Nonetheless, Roman authorities viewed such independent festivities with hostility. As a result, celebrating Bacchus became a capital offense, except in state-sponsored congregations.

Why did Caravaggio paint Bacchus?

Staying as the Cardinal's guest for five years (between 1596 and 1601), Caravaggio painted many artworks for him. Indeed, the classical subject matter of Bacchus reflects the Cardinal's academic humanist interests. Furthermore, scholars also believe the portrait shows the Cardinal's appreciation for delicate foods and worldly excess.

Cardinal Del Monte donated Bacchus alongside another Caravaggio artwork, Medusa, to the Medici family. These paintings revealed his scholarly knowledge of classical cultures, art, and music.

What style of art is Bacchus?

Bacchus is a masterpiece of Italian Baroque Art. It shows Caravaggio's early use of chiaroscuro (dramatic contrasts between light and dark) and his expert painterly skill.

As well as these homoerotic undertones, Caravaggio also suggests a "vanitas" theme. As a style of art, this shows the fleeting nature of youth and pleasure. But, ultimately, everything will die and decay. A rotting apple and bursting pomegranate sit in the fruit bowl, showing this unavoidable collapse.

Scholars believe Caravaggio harbored romantic feelings for the young man in the portrait. Authorities in sixteenth-century Florence didn't prohibit same-gender relationships with young boys. Consequently, many wealthy patrons and artists were comfortable with such liaisons.

Who is the boy in Caravaggio's Bacchus painting?

Records about the model's identity in Caravaggio's Bacchus painting are scarce. Even so, many believe it is Mario Minniti, a pupil of Caravaggio. Indeed, Minniti appeared in several other Caravaggio artworks, including Boy with a Basket of Fruit, The Lute Player, and The Calling of Saint Matthew.

Intriguingly though, others believe the portrait could be a self-portrait. In 1595, Caravaggio was just twenty-four years old. He could easily exaggerate his youthful features.

The model also offers a large wine glass with his left hand. This unusual position could suggest that Caravaggio used a mirror to paint his reflection.

Caravaggio also produced another Bacchus painting, Young Sick Bacchus, in 1593. Scholars believe this earlier work features the same model (Minniti or Caravaggio). In this version, though, his skin is yellow, and his body turns away from the viewer's gaze.

Where is Bacchus by Caravaggio?

The famous paintings of Caravaggio are all available from our extensive online catalog of oil painting reproductions. 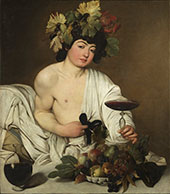