All Artists
L
LEIGHTON, Frederic Lord
A Girl with a Basket of Fruit c1862 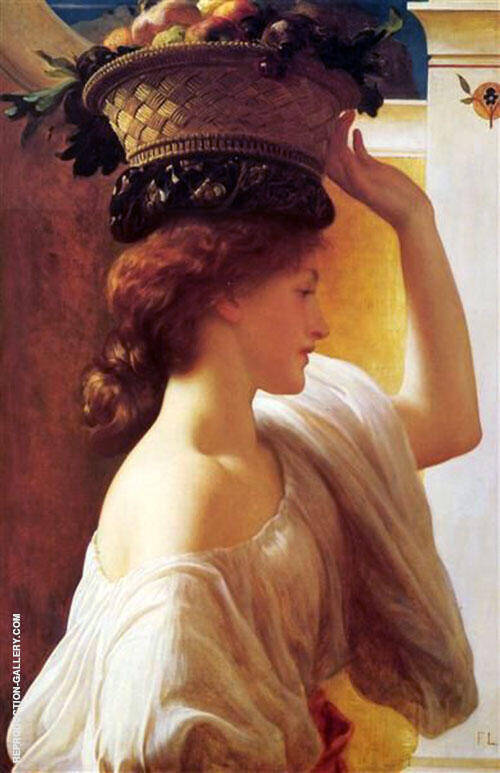 Born on 3 December 1830, Sir Frederic Leighton was a British painter and sculptor particularly famed for his biblical and classical paintings.

Born in Scarborough (a seaside town in the North Riding of Yorkshire, England), Sir Frederic Leighton enjoyed a happy childhood. The son of Augusta Susan and Dr Frederic Septimus Leighton, he was close to his two sisters, Augusta and Alexandra.

Due to the father’s work as a doctor, the family traveled frequently, and the children enjoyed a thoroughly European education.

The young man studied at University College School London, before receiving his main artistic education in Europe. This initially came from the Viennese artist Eduard von Steinle. A member of the Nazarene movement, Steinle prized spirituality in art. His characters were usually dressed in a biblical manner, reflecting early renaissance stylings.

After studying with Steinle, Leighton collaborated with the Italian artist Giovanni Costa. Costa primarily focused on landscape art, focused on patriotic depictions of his home country. He appears in Leighton’s Portrait of Professor Giovanni Costa, painted in 1878.

Leighton also worked on landscapes and townscapes of his own, including a view of the Villa Malta Rome (1860) and Nile Landscape (1868).

Paintings by Frederic Leighton combine the biblical and romantic inspirations of these two early teachers, amply displayed in works such as The Fisherman and the Syren (painted in 1856, based on a ballad by the German poet, Goethe) and the atmospheric realism of Painter’s Honeymoon (1864).

Whilst in Frankfurt during the summer of 1847, Leighton was lucky enough to meet the famous German philosopher, Arthur Schopenhauer. At just seventeen years old, he drew Schopenhauer’s portrait. Completed in graphite and gouache on paper, it remains the only full-length drawing of Schopenhauer.

At the age of twenty-four, Leighton moved to Florence and continued his studies at the Accademia di Belle Arti (one of the country’s leading art academies). He then moved to Paris in 1855, initially to meet his sister, Alexandra.

It was here that Leighton introduced Alexandra to the great Victorian poet and playwright Robert Browning. His sister and the poet became firm friends, with Browning reading to Alexandra at least twice a week. She lost her sight at the age of sixteen, due to rheumatic fever picked-up on the family’s travels.

Alexandra later wrote a biography of Browning. She also sat for Leighton on several occasions, appearing in at least two of his paintings.

One of these works, Portrait of Alexandra Leighton, later Mrs. Sutherland Orr (1953) delighted audiences at the Royal Academy exhibition of 1861. Painted in side-profile, Leighton depicts his sister with a roman wreath around her head, gazing out over an Italian landscape complete with cypress trees, stone buildings and receding rolling hills.

Leighton had a wide circle of European avant-garde artistic and intellectual friends. This included many French painters such Delacroix, Corot, Ingres and Millet. Their style of classical realism made a lasting impression on Leighton.

Was Frederic Leighton a Pre-Raphaelite?

His fame steadily grew during this period (largely due to his popular Neo-Classical style), culminating in Leighton’s acceptance as an associate of the prestigious Royal Academy of Arts.

From 1878 to 1896, Leighton held the even greater honor of serving as President of the Royal Academy.

Following on from esteemed Presidents such as Joshua Reynolds and Thomas Lawrence, Leighton passionately supported the organization’s promotion of the arts. Based at Burlington House, Piccadilly, the institution continues its charitable mission through exhibitions and educational initiatives to this day.

Leighton also joined the Artists Rifles (an army volunteer corps) in 1860, and was quickly promoted to Captain just nine years later. In 1875, Leighton was promoted again to the position of Lieutenant Colonel.

The painter James McNeill Whistler once laughingly described Leighton as “Colonel of the Royal Academy and the President of the Artists Rifles”. He sardonically quipped “and he paints a little too!”

What are famous Frederic Leighton artworks?

Some of the most famous Frederic Leighton artworks include Music Lesson (1877) and The Return of Persephone (1890). In the former painting, Leighton’s amazing proficiency in romantic everyday scenes (demonstrated in the touching maternal atmosphere) is plain to see.

Frederic Lord Leighton’s Persephone is a true masterpiece however, demonstrating his love of the Academic Style and classical influences. It vividly depicts the moment of joy witnessed at Persephone’s brief annual reunion with her mother, Demeter. Leighton frequently tackled Greek and Roman mythology in his art, also evidenced in Daedalus and Icarus (1869) and The Bath of Psyche (1889).

Frederic Leighton’s Flaming June (1895) was one of the artist’s last paintings, representing the highpoint of Victorian Neo-Classical art and his personal magnum opus.

Throughout his life, Leighton remained unmarried. Rumors abounded about illegitimate children and accusations of same-sex attraction, but this remains unproved.

Leighton certainly had several intense relationships with male friends (most notably the poet Henry Willian Greville). From surviving letters however, Leighton does not appear to have reciprocated Greville’s romantic feelings.

Sadly, Leighton bears the unfortunate record for holding the shortest ever peerage in UK history. Only one day after being made a Baron, he passed away.

Leighton died on 25 January 1896, from a heart attack. With no children of his own, the peerage expired.

At his funeral (held on 3 February 1896), mourners carried Leighton’s coffin past a guard of honor by the Artists Rifles, into St Paul’s Cathedral.

What is Frederic Leighton’s legacy?

Leighton’s sisters outlived him and ensured his legacy continued. At Alexandra’s insistence, Leighton’s principal residence (an impressive home in Holland Park, in the borough of Kensington and Chelsea) became the “Leighton Museum”.

Today, Leighton’s portraits of Alexandra hang in the National Portrait Gallery and the Leighton Museum. The Leighton Museum still contains most of the artist’s paintings and drawings, as well as his extensive personal art collection.

Reflecting his high contemporary esteem, a selection of Frederic Leighton paintings represented Britain at the 1900 Exposition Universelle in Paris