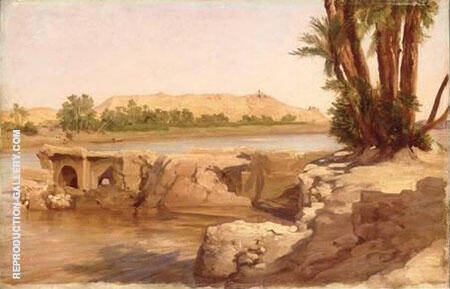 Lord Frederick Leighton. 19th century English classical, biblical and historical artist and sculptor, famous not only for his paintings, but for dying the day after he was given his peerage and so remembered as the holder of the shortest peerage in British history. Frederick Leighton was educated in London and after touring Europe became associated with the Pre-Raphaelite movement. He lived in Holland Park, West London, was knighted in 1878 and created a Baronet eight years later. Leighton died the following day at which time the title expired as Leighton was without heirs.

Flaming June by Frederick Leighton was painted in 1895 and demonstrates the artist’s classicist skill. The painting depicts an unknown model in lanquid pose with Oleander branch in the background is said to denote the fragile connection of sleep and death.

Would you like to buy a museum quality oil painting reproduction of “Flaming June’ by Lord Leighton? Browse our catalogue of this painting and many other of his Classicism works of art.