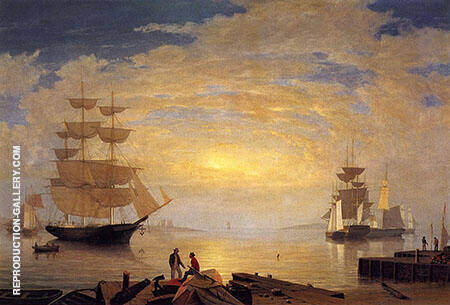 19th century American artist Fitz Hugh Lane whose use of light in his paintings became known as Luminism. He was born in Massachusetts as Nathanial Rogers Lane and is also known as Fitz Henry Lane. He worked in Boston in a lithographer’s shop and it is there that he began to learn to paint. Lane was brought up next to Gloucester Harbor and his father was a sailmaker. Fitz Hugh Lane chose seascapes and ships as the subject matter of his paintings. He was a contemporary of the Hudson River School of landscape artists and was considered the best American painter of maritime subjects in his lifetime. His paintings are widely held in American museums and at action reach prices of up to $5 million.

Boston Harbour Sunset was painted by Fitz Hugh Lane. It is a typical example of one of his Luminism style painting. Would you like to buy a reproduction of this famous painting?