All Artists
R
RIJN, Rembrandt Van
The Storm on the Sea of Galilee 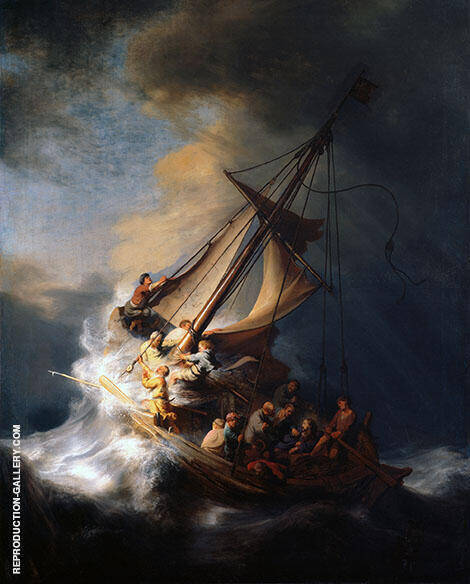 Storm on the Sea of Galilee is an iconic and mysterious religious painting completed by Rembrandt van Rijn in 1633.

What is the subject of Christ in the Storm of on the Sea of Galilee?

Of all 600 Rembrandt van Rijn oil paintings; Christ in The Storm of Galilee 1633 is the artist’s only seascape. Rembrandt’s biblical painting depicts a scene as told in the New Testament Books of Matthew, Mark, and Luke when Jesus and his disciples crossed the Sea of Galilee.

Out of nowhere, a ferocious storm arose and threatened to destroy their boat. Filled with panic, the disciples tried in vain to control the rigging and the sails of their small fishing vessel.

They consequently awoke Christ, who’d been sleeping in the stern of the boat. His disciples asked if their Lord didn’t care whether they lived or drowned. Christ calmly commanded the sea, “Peace! Be Still!”.

Immediately, the wind ceased, and the waters returned to serenity and calm. Then, rebuking them for their fear, Jesus asked his followers, “Why are you afraid? Have you still no faith?”.

Amongst the panic-stricken figures, only two remain still and calm. One is Christ, and the other is Rembrandt, gazing directly at the viewer. He steadies his position by holding a rope with one hand and grasps his cap with the other hand. With this bold inclusion, the artist involves the viewer as an active participant in his imaginative world.

What is the message of The Storm on the Sea of Galilee?

It depicts human frailty (both spiritual and physical) and emotional turbulence, contrasted with God's overwhelming power and immutability.

Rembrandt moved to Amsterdam from Leiden and The Storm on the Sea of Galilee and completed the painting shortly after.  The painting reflects an increasing stylistic maturity. Other famous Rembrandt paintings of this era include Judith at the Banquet of Holofernes (1634), Belshazzar's Feast (1635), and the mythological masterpiece Danaë (1636).

The scene is incredibly detailed, with each disciple's expressions and actions brilliantly depicted. The controlled brushstrokes and vivid coloring are reminiscent of Rembrandt’s earlier style of history painting. Despite this, his later expressionism and dynamic compositional structure are already evident.

The Storm on the Sea of Galilee reflects Rembrandt’s amazing ability to seize our attention and place the viewer right in the middle of historical and sacred scenes. The contemporary fishing boat creates greater immediacy and empathy regarding the subject matter. In compositional terms, the dark skies contrast with the bright white crashing waves, adding dynamism and chiaroscuro to the swirling composition.

The Storm on the Sea of Galilee Theft

In 1990 Christ in the Storm on the Sea of Galilee was stolen. The painting, owned by the Isabella Stewart Gardner Museum in Boston, hung amidst other artworks from the Dutch Golden Age of painting, and the theft remains one of the art world’s most notorious unsolved heists.

On the morning of 18th March 1990, two individuals broke into the museum, posing as two police officers.  They stole The Storm on the Sea of Galilee and twelve other famous artworks.

The crime remains the most significant art theft in American history, and the location of the painting is still unknown.

Rembrandt's Storm on the Sea of Galilee is just one of our large catalog of religious paintings for sale.

Discover paintings of Jesus Christ from our Art Selection of famous paintings.

Fine art reproductions are 100% hand painted by professional artists and are available in many size options.

The Storm on the Sea of Galilee
By Rembrandt Van Rijn