When Hilma af Klint first began creating art in 1906 – she produced something revolutionary.

Abstract oil paintings on canvas were to be transformed by her bold, colorful, soulful designs completely detached from figurative representation.

Whilst other artists spent time creating manifestos and “rules” for creativity and expression, Hilma af Klint focused on her own private, sacred and spiritual world.

Today, abstract expressionists such as Wassily Kandinsky, Kazimir Malevich and Piet Mondrian are famed the world over.

But why isn’t Hilma af Klint as well-known?

Hilma af Klint was convinced that the world wasn’t ready to understand her paintings.  She therefore rarely exhibited her work.

This meant her paintings were largely unseen until the late 1980s.
The art world is only just catching-up with her ground-breaking oeuvre… but it’s catching up fast!

Hilma af Klint paintings have been recently displayed at the Guggenheim Museum in New York, Stockholm’s Moderna Museet, Serpentine Galleries and the Royal Academy in London – to name just a few.

Today, we take an in-depth look at Hilma af Klint artworks.  Just who was this pioneering female artist and what drove her creative passion?

Who was Hilma af Klint?

Hilma af Klint was born in Stockholm in 1862. After studying at the city’s Royal Academy of Fine Arts, she went on to quickly establish herself as a respected and successful painter in the Stockholm art scene.

Initially focusing on figurative paintings (and briefly working as the secretary of the Association of Swedish Women Artists), Hilma Klint established a close circle of like-minded friends and artists. She soon became engrossed with the new “spiritualism” and esoteric Christianity taking hold across Europe.  She established religious meetings with “The Five” including Anna Cassel, Cornelia Cedarburg, Sigrid Hedman, Mathilda Nilsson and Hilma af Klint.

As part of their spiritual routine, the five women prayed, meditated, recited and read the New Testament together before conducting séances. Taking turns serving in the role of medium, they drew any images sent from a collection of spirits known as the High Masters.

In 1904-5, Hilma af Klint was spiritually instructed to create the 193 large-scale paintings that would comprise her “Paintings for the Temple” (1906-1915). Speaking the “language of angels”, these works broke all previously accepted rules of art. Abstract oil painting on canvas would never be the same again…

During a séance, Hilma af Klint was instructed to work on a series of paintings “on the astral plane”. These paintings were to represent “transcendental truth” and knowledge “that all is one”, instead of figurative “mortal” likenesses.

Hilma af Klint initially worked on a small-scale series of 26 abstract oil paintings on canvas called “Primordial Chaos”. Painted between November 1906 and March 1907, these works consisted mostly of blue, green and gold hues – taking inspiration from water, earth and light itself. These paintings then formed the inspiration for Paintings for the Temple… a body of work that completely engrossed Hilma af Klint for the next eight years. 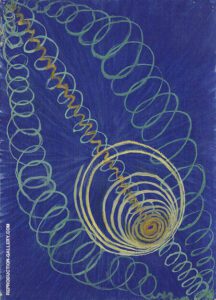 “The pictures were painted directly through me, without any preliminary drawings, and with great force. I had no idea what the paintings were supposed to depict; nevertheless, I worked swiftly and surely, without changing a single brush stroke.”

Stylistically, Hilma af Klint’s Paintings for the Temple are incredibly diverse. Sometimes incorporating biomorphic forms, sometimes based on geometric shapes and almost recognizable forms – they are painted on canvases of all scales with a massive variety of color palettes. Hilma af Klint Ten Largest (painted in 1907) represent the four ages of mankind (childhood, youth, adulthood and old age), others are purely abstract in form and composition. 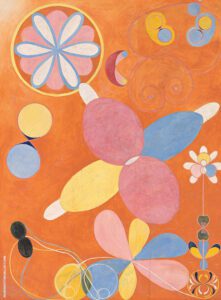 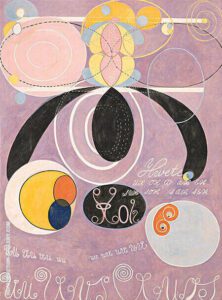 Whilst the temple in the series’ title refers to spiritual evolution rather than a specific location – Hilma af Klint did imagine installing the paintings in a specially constructed spiral temple. This never came to fruition however. Hilma af Klint’s friend Anna Cassel instead stored these massive works in a specially built studio. Shrouded in secrecy, these works remained in Cassel’s studio until Hilma af Klint’s death in 1944. 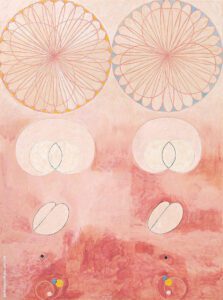 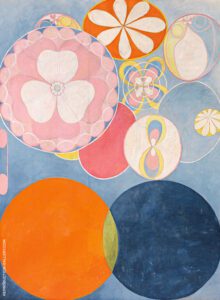 The Hilma af Klint Swan Series was painted shortly after the artist finished her Paintings for the Temple series. Consisting of a group of 24 abstract oil paintings on canvas, the artworks were created between 1914 and 1915. Harking back to some of her earliest work, they are much more figurative – but with the in-depth symbolism and spiritualism that characterized Hilma af Klint’s later artistic development.

In alchemy, The Swan represents the union of opposites – a merger necessary to create the “Philosopher’s Stone” (a substance capable of turning base metals into gold). In the Hilma af Klint Swan Series, her monochromatic black and white palette (perfectly represented works such as Swan No. 2 and Swan No. 17 underscores the contrasting pairs of light and dark, male and female, life and death, all meeting at the center of the canvas.

In many of these works, duality is represented in the repetition of forms, or mirroring of abstract ideas across the canvases. Many paintings in the Hilma af Klint Swan Series utilize a horizontal line across the canvas – which both separates ideas and physical space, but also pulls the entire composition together.

With large exhibitions at the Guggenheim Museum in New York, Stockholm’s Moderna Museet, Serpentine Galleries and the Royal Academy in London – it’s safe to say that Hilma af Klint is no longer a little-known name in the art world.

Her artwork has come up for auction multiple times, with prices ranging from the lowest of $130 US dollars to a staggering $165,825. This highest price (a record for Hilma af Klint paintings) was for “The Power of the Spleen” – sold at the Stockholm Auction House in 2019. More recently, another painting was sold at the Galerie Bassenge (Belgium) for c. $64,600 US dollars.

With Hilma af Klint’s continued exhibitions and coverage in international publications (including the Art Newspaper, Guardian and Frieze) – this interest is only set to rise.

With her underlying messages of empowerment and self-fulfillment – the art world has only recently recognized the massive significance of Hilma af Klint’s work.

At a time when women were often confined to the menial and domestic, Hilma af Klint created art on a truly cosmic scale.

Her work has been rehabilitated and understood for the present age, speaking to contemporary concerns of social, ecological and spiritual development.