All Artists
R
RENOIR, Pierre Auguste
The Luncheon of the Boating Party 1881 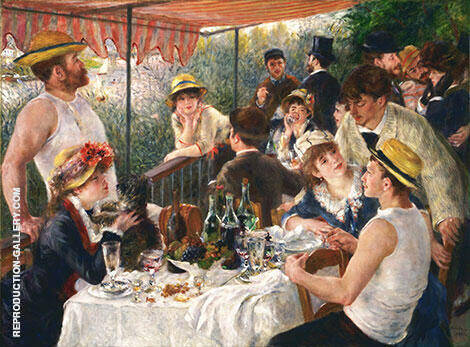 Renoir Luncheon of the Boating Party

Painted in 1881, Pierre Auguste Renoir’s Luncheon of the Boating Party is one of the crowning glories of the Impressionist movement. Described by Duncan Phillips (founder of the Phillips Collection) as “one of the greatest paintings in the world,” it remains one of the most visited and discussed paintings of all time.

Why did Renoir paint the Luncheon of the Boating Party?

Luncheon of the Boating Party is celebrated amongst famous Renoir paintings for its technical proficiency and vivid storytelling. The impressionist focus on flickering, shifting light depicted with fleeting, fluid brushstrokes is particularly evident.

Light streams in from the balcony opening, reflected particularly from the white shirts and rumpled tablecloths. Rather than carefully delineated outlines, the painting relies on contrasts of color and shape to build a scene full of interest and movement.

The painting shows a group of friends socializing on the Maison Fournaise restaurant balcony. Scenically located along the river Seine in the suburbs of western Paris, it was a particular haunt of impressionist circles.

Who are the people in Boating Party?

All the figures in Renoir’s Luncheon of the Boating Party are identifiable with reasonable certainty. They are mostly friends of the artist. The individuals on the immediate right of the composition consist of Angèle (one of Renoir’s long-standing muses), the journalist Maggiolo and the painter Gustave Caillebotte (mischievously sitting backward on his chair).

Caillebotte gazes across the table at Aline Chariot, a woman playing with her small dog. Charigot and Renoir later married. The muscular Alphonse Fournaise Jr. (the proprietor’s son) leans against the railings, staring back into the painting. This draws the viewer’s gaze more profoundly into the pictorial space, towards the remaining figures.

The background figures include the cavalry officer Raoul Barbier (facing away from the viewer) and the banker and art-editor Charles Ephrussi (wearing a top hat). Jeanne Samary (a touring actress with the Comédie Française) appears in the upper-right-hand corner.

Despite the long scholarship on their exact identities, the specifics of Renoir’s sitters aren’t integral to the painting’s meaning. Renoir aimed to immortalize the sitters, representative of contemporary society as a whole, rather than individual character sketches.

What genre is this famous Renoir painting?

Amongst Renoir artwork, Luncheon of the Boating Party is particularly hard to define in terms of genre. Some class it among impressionist landscape paintings. Others argue it’s best appreciated as a modern genre painting or a simple group portrait. It’s perhaps best understood as equal measures of figure painting. Still life and landscape combined.

Buy famous art reproductions of Renoir's Boating Party.  Every oil painting is offered in many sizes and is hand-painted by one of our resident professional artists.

The Luncheon of the Boating Party 1881
By Pierre Auguste Renoir