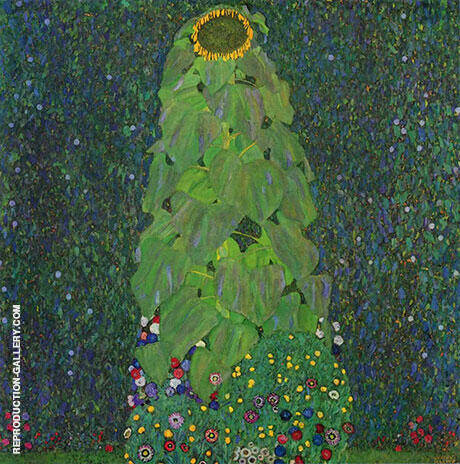 Klimt was not born into a wealthy family and aged 14 he attended The Vienna School of Arts and Crafts having won a Scholarship. Klimt led a somewhat bohemian existence and never married although it is said he fathered some 14 children and slept with every woman whose portrait he painted.

Gustav Klimt gold paintings, are known as Klimt’s Golden Period and include The Kiss 1907, Portrait of Adele Bloch-Bauer, Judith II 1907 and Pallas Athene.

Gustav Klimt The Kiss reproduction is by far his most popular painting. The Kiss expresses love and intimacy with a couple in a tender embrace on a foreground of multi-colored flowers and is considered one of the most famous romantic paintings.

The Kiss 1907 was created by Klimt during a low period in his career when he was full of self-doubt.

However, before The Kiss was completed it was sold to the Belvedere Museum Austria. In today’s terms, The Museum paid around $250,000 which vastly exceeds any amount paid for any work of art in Austria at that time. The Kiss 1907 is considered a national treasure by the Austrians and it attracts hundreds of thousands visitors a year to the Museum. The original painting is an impressively large square oil painting being 180cm x 180cm.

Although the female in the painting The Kiss has never been formally confirmed, she is believed to be Emily Floge, who was Klimt’s sister-in-law and also his lover. Klimt painted a Portrait of Emily Floge in 1902

Art Nouveau Art Movement artist Gustav Klimt was a leading member of the Vienna Secession Movement. Many Gustav Klimt oil paintings were purchased by famous Jewish patrons of the arts prior to the Second World War but were later confiscated by the Nazis.

The Stoclet Frieze comprises three panels and makes a major contribution to Art Nouveau and the Secessionist Movement. The Tree of Life sits in the center, whilst to the left is Expectation and to the right Fulfillment. The small geometric form of Stoclet Frieze Patterns sits in the same location of the dining room at Stoclet Palace which became a UNESCO World Heritage site in 2009.

Klimt’s brother Ernest married Helene Floge, the sister of Emily Floge and many of Klimt’s landscape paintings were completed whilst he was staying at Schloss Kammer on Lake Attersee in Austria, the home of the Floge family. Schloss Kammer on the Attersee IV 1910 is held in a Private Collection. Litzlberg am Attersee c1915 was sold in 2011 for just over $40m. On Lake Attersee 1900 is part of the Leopold Museum Collection and is a popular Gustav Klimt reproduction.

Browse our large online catalog of Klimt reproductions and other Art Nouveau and Klimt replica paintings. 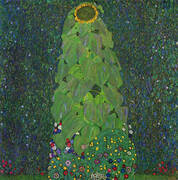