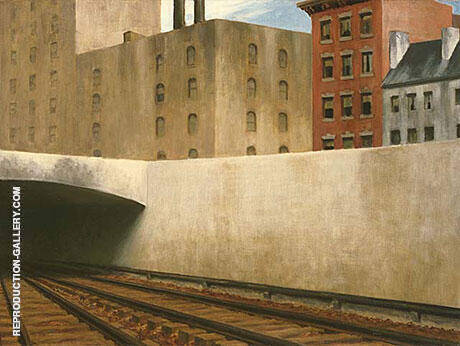 Edward Hopper was born in July 1882 and died in May, 1967. Hopper is considered to be a Realism painter, and although most generally known for his oil painting on canvas, he was also an accomplished watercolorist and printmaker in etching.

Hopper was born in Nyack, New York, which is on the Hudson River and at that time was well known for its yacht building, which became a prominent theme in Hopper’s paintings in later life.

His parents were comfortably off middle-class Americans of Dutch descent, and his father was a dry goods merchant. Hopper and his sister were privately educated and at aged 5, Hopper showed early signs of talent. His parents encouraged this artistic talent and Hopper started to sign and date his drawings at aged ten.

By his teens Hopper was working in pen and ink, charcoal, watercolor and oil on canvas, creating his first signed oil painting in 1895; Rowboat in a Rocky Cove, which was a reproduction oil painting copied from a picture in an art magazine.

Although Hopper had expressed an interest in becoming a naval architect, when he graduated high school, he chose to become an artist. His parents accepted that decision, but insisted that he study commercial art so that he would have an income. He enrolled at the New York School of Art and Design, and studied for six years, taught notably by the famous American painter William Merritt Chase, who taught oil painting.

In 1905, Hopper got a job with an advertising agency, working to create cover designs for trade magazines. Hopper hated this but was required to continue by way of economic necessity as he had to support himself.

However, he found time and the money to fund three trips to Europe, staying mainly in Paris, to study art. He was impressed by the work of the Dutch Golden Age masters and the painting of Rembrandt, particularly The Night Watch, which he described as “the most wonderful thing of his that I have seen”.

Hopper began to paint urban scenes in Paris, mainly street and café scenes. He also enjoyed going to the theatre and the opera. He ignored the European trend of the Cubist Movement but rather was attracted to Realism and realist art.

When he arrived back in America he rented a studio in New York City, and tried to develop his own style, but had to return to commercial art and illustration to make money. In 1912, Hopper went to Gloucester, Massachusetts and painted Squam Light, the first of the many lighthouse paintings for which he became famous.

In 1913, he sold his first painting, Sailing 1911 at the Armory Show. He hoped that this would lead to many more sales of his paintings, although this did not happen for some years to come.

After his father’s death in 1913 Hopper moved to 3, Washington Square North, where he lived in for the rest of his life.  In 1914 he received his first commission to create some movie posters and although he did not like illustration work, he did like cinema and the theater, demonstrated by his oil paintings, notably New York Movie 1939, and Sheridan Theater, 1937.

In 1915, in an attempt to earn money, Hopper turned his attention to etching. He produced urban scenes of Paris and New York City, and posters for the war effort, which did gain him recognition. In 1921 and 1922 he painted two notable oil paintings, New York Interior, 1921, and  New York Restaurant, 1922.

The early 1920’s were formative years when Hopper developed his future trademark style, with Girl at Sewing Machine, 1921, and Moonlight Interior, 1921. These were the first examples of Hopper’s style of looking into windows and seeing the people inside.

In 1923 Hopper married Josephine Nivison who had also been a student of Robert Henri. She gave up her career to manage Hopper’s career and was his main model in his paintings. She and Hopper spent the rest of their lives between New York City and South Truro in Cape Cod.

In 1923 Hopper gained recognition for his paintings. He was selling his works regularly and in 1927 sold Two on the Aisle, 1923 for a then personal record price of $1,500. In 1929 Hopper painted his iconic Chop Suey, and Railroad Sunset.

During the Great Depression of the 1930’s Hopper’s paintings were bought regularly by museums, allowing the Hoppers to spend their summers in Cape Cod. This is where some of Edward Hopper’s most famous paintings were created.

Edward Hopper’s painting Nighthawks 1942, is an iconic painting and one which is instantly recognized across the world.

Hopper has been considered by some as a member of the Ashcan School, with fellow artists his former tutor Robert Henri, George Luks, William Glackens, and John Sloan, who painted urban scenes of New York City, although Hopper himself always rejected this claim.

Hopper died in 1967 of natural causes. His wife Josephine died a year later and in her will left over 3,000 works to the Whitney Museum of American Art.

Without doubt, Hopper is one of the most famous and influential American artists. The famous artists Willem de Kooning, and Mark Rothko both cite Hopper as an important influence.

Hopper’s House by the Railroad, heavily influenced Alfred Hitchcock in his setting for the movie Psycho, and the 1981 movie Pennies from Heaven includes a scene similar to Hopper’s Nighthawks, 1942.

In terms of value, paintings by Hopper very rarely come on to the open art market as most are held in either museums or private collections. However, the actor Steve Martin sold his Hotel Window 1956, for $27 million at auction by Sotheby’s New York in 2006, and Wind Over Weehawken 1934, was put up for sale in 2013 by its owner, the Pennsylvania Academy of Fine Arts, and was sold at auction by Christie's in New York for a record $40 million to an unnamed bidder.

Most recently, Chop Suey 1929, was sold by the estate of Barney A. Ebsworth for $92 million, making it the most expensive painting by Hopper, to date.

Oil painting replicas for sale of Edward Hopper paintings are available in many size options and are all recreated entirely by hand by a professional artist.

Approaching the City
By Edward Hopper