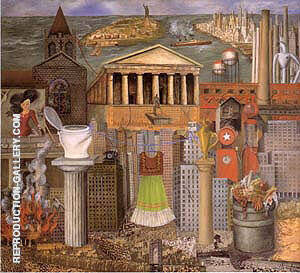 Amongst famous Mexican painters, one artist has truly shone through the centuries.

Living at a time of significant political and historical upheaval, paintings by Frida Kahlo provide a fascinating insight into not only her own life and experiences as a woman living in Mexico, but some of the most tumultuous events of the twentieth century.

Who is Frida Kahlo

With a German father of Hungarian heritage and a Mexican mother (with Native American and Spanish descent), Frida Kahlo self portraits frequently explore themes of identity and the human body.

As a young girl, Kahlo contracted polio. An acute viral disease impacting the nervous system, this infection left her with a limp lasting her entire adult life.

Kahlo consequently spent extended periods within the family home. Particularly close to her father (a professional photographer), she assisted him in his studio. This is perhaps where Frida Kahlo artwork and her love of imagery first blossomed.

Despite taking some drawing classes, Kahlo initially studied Science and Medicine. She enrolled in the National Preparatory School of Mexico City in 1922, with a view to studying medicine.

Whilst living in Mexico city, Kahlo met the famous artist Diego Rivera who was working on a mural for the school auditorium.

What was Frida Kahlo’s Disability?

In 1925, Kahlo experienced a catastrophic bus accident. It was an extreme incident that almost killed her and broke almost every bone in her body. In addition, the bus rail pierced straight through Kahlo’s abdomen.

She underwent over thirty medical operations (at various points during her life) as a result. This was a constant financial worry as well as leaving Frida in significant pain. Whilst she initially recovered well, from her mid-thirties onwards, Kahlo was increasingly unable to walk.

During her slow and painstaking recovery, Kahlo began to paint. Her parents installed a mirror above her bed, allowing the young woman to use her medical insights and diligence. She turned her creative talents towards understanding her own psyche and broken body.

After this long convalescence, Kahlo joined the Mexican Communist Party. At political meetings, she met Diego Rivera once again. The pair married in 1929 and forged an unlikely yet creatively-rich partnership.

Artwork by Frida Kahlo after this date frequently returns to themes of Mexican folk art; a topic Rivera strongly supported. Despite this love of Mexico, the two traveled to North America in 1930 (as a result of Diego’s mural commissions), only returning in 1933.

During this time, Kahlo suffered multiple difficult pregnancies and miscarriages which she represented in her art. Referencing these disappointments, Frida Kahlo portraits from this period (such as Henry Ford Hospital and My Birth) are particularly harrowing.

What is Frida Kahlo Known For?

For anyone searching for the Frida Kahlo most famous painting, the artist’s self-portraits are particularly iconic. In all these works, her direct gaze is arresting and unavoidable.

Paintings by Frida Kahlo often focus on her own face and physique (the result of years spent in bed, with only a mirror for company). Works such as Frida Kahlo The Broken Column are particularly representative of the medicalization of her body.

Painted in 1944, shortly after spinal surgery, the all-encompassing presence of ongoing pain and suffering is evident. Kahlo stands as a solitary presence amongst a barren landscape, supported by her metal spinal “column”.

This contrasts with earlier works such as Frida Kahlo Self Portrait with Thorn Necklace and Hummingbird (1940), where the artist appears surrounded by nature.

Despite the idyllic background of luscious green leaves, her pain still speaks loudly. Thorns knot around Kahlo’s throat (in a possible Christian reference) and the artist stoically endures her suffering.

Why is Frida Kahlo Famous?

This included Leon Trotsky (with whom Kahlo had a brief affair and dedicated a self portrait) and the famous Surrealist artist André Breton. Breton particularly championed Frida Kahlo’s art and wrote the introduction to her first solo exhibition held in New York in 1938.

Later traveling to Paris, Kahlo met the surrealist artist, Marcel Duchamp. She commented he was the only surrealist she ever really admired. Whilst in France, the Louvre museum also purchased one of her paintings (The Frame) making Kahlo the first twentieth-century Mexican artist in the Louvre’s collection.

Why is Frida Kahlo a Feminist Icon?

Frida Kahlo feminist artworks also account for the artist’s subsequent fame. Her self-portraits are so brave and so bold, they are true icons of the feminist movement and women’s ownership of their own bodies.

Furthermore, paintings such as A Few Small Nips reference the violent treatment of women in Mexico (inspired by a well-publicized court case), as well as Frida’s personal outrage at personal events.

Indeed, Rivera had a prolonged affair with Kahlo’s younger sister, which left Frida distraught. This led to the couple’s divorce in 1939. Many scholars note the similarity of the man in A Few Small Nips with Rivera, with the woman possibly representing her sister.

Other works such as The Two Fridas depict the split nature of womanhood, Kahlo’s personal identity (dressed in a European style wedding dress and Tehuana attire) as well as the complex expectations of society and family.

In this painting, indigenous Kahlo reveals an artery leading straight from her heart to a miniature portrait of Diego Rivera. Her European form attempts to stem the flow of blood however, threatening her pure white dress.

The couple reconciled in 1940 and returned to Kahlo’s childhood home (La Casa Azul or The Blue House) based in a residential area just south of central Mexico city.

In a large personal boon, Kahlo became professor of painting at La Esmeralda in 1943. As the Education Ministry’s School of Fine Arts, this was a significant appointment.

When Did Frida Kahlo Die?

Unfortunately, Kahlo’s health rapidly deteriorated in the following years. She turned to alcohol and drugs for relief from extreme pain. This led to Kahlo’s mental state deteriorating and the decline of her painterly skills.

She underwent many surgeries during the 1940s and 1950s, spending prolonged periods of time in hospital. Unable to walk and in near agony, she attended her first (and only) solo exhibition which took place in 1953 lying on a bed.

Despite this, Kahlo continued painting right up to her death on 13 July 1954. One of her last paintings, Self-Portrait with Portrait of Dr. Farill (1951) depicts the artist sitting in a wheelchair.

After her death, Diego Rivera redesigned their home at La Casa Azul as a museum dedicated to Frida Kahlo’s art. It opened in 1958, a year after Rivera’s own death.

Discover the world of famous Frida Kahlo paintings. Oil painting reproductions from our catalogue of Friday Kahlo Portraits and Flower paintings are available in many size options. 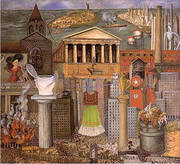