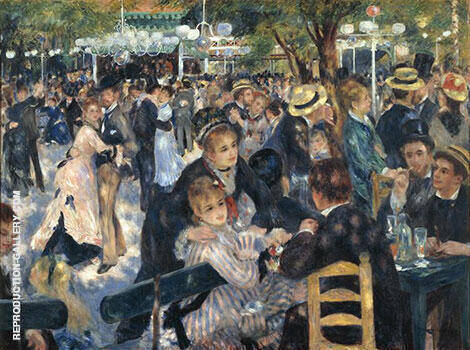 Created by Pierre Auguste Renoir, Bal Au Moulin de la Galette represents a Sunday afternoon spent by patrons at the Moulin de la Galette. This seventeenth-century windmill was a popular bar and restaurant near the top of the Montmartre district in Paris.

Indeed, towards the end of the nineteenth century, establishments such as this were enormously popular. Various classes of French society mixed, with working classes rubbing shoulders with creatives and elites.

Everyone dressed in their finest clothes, dancing, drinking, and dining late into the evening. One of the most popular dishes was (unsurprisingly) galettes. A form of round pastry or pancake pie usually with a savory or fruit filling, it’s common all over France.

What is the meaning of Bal au Moulin de la Galette?

Stylistically, the work is similar to other early Pierre Auguste Renoir paintings. In terms of meaning, it simply reflects the artist’s interest in portraying an accurate snapshot of everyday life.

The colors are light and bright, the people smiling and crowded into the space. The painting’s rich forms, complete composition, fluid brushstrokes, and flickering sun-filled effects reflect other Renoir masterpieces of this period. Perhaps his best-known light-filled creation is Le Déjeuner des Canotiers (Luncheon of the Boating Party), painted in 1881.

Intriguingly, Renoir also painted a smaller version of the artwork. Both depict dancing at the Moulin de la Galette; the two versions are almost identical in color and composition.

Despite this, the smaller version is much more fluid and accessible form, suggesting a quicker artistic study. It is still unknown which painting is the genuine “original,” however.

Indeed, we don’t even know which version first appeared at the “Third Impressionist Exhibition” of 1877. We do see the painting received incredibly favorable reviews from critics and the public alike, though.

Why did Renoir paint the scene at the Moulin de la Galette?

Renoir discussed the concept of painting energetic dancing at Le Moulin de la Galette in the spring of 1876. In his reasons for creating the work, he aimed to depict the reality and beauty of everyday life.

Comically, he also spoke of the wind threatening to blow Renoir’s canvas away multiple times. To perfect the painting, Renoir rented a studio near the windmill. He located an appropriate space in the nearby Rue Cortot; an abandoned cottage with a beautiful park-like garden. Some of the most well-known and popular Renoir paintings were also painted here, including La Balançoire (The Swing).

Painting “en Plein air” was an essential characteristic of impressionist artists. The movement prioritized the depiction of the effects of light, the passage of time, and “ordinary” everyday life subject matter.

Emerging in the early 1870s, Renoir was a key participant and early pioneer of the style. Collaborating with artists such as Claude Monet and Frédéric Bazille, he unceasingly championed their innovative approaches.

Who are the people in one of Renoir’s most famous impressionist paintings?

Renoir painted the artwork to depict contemporary French society in general. Despite this (and likely to save on models’ fees), many of the individuals in the painting were close acquaintances.

In Georges Rivière’s memoirs, he identified many of the sitters.

The sisters came to Le Moulin every weekend alongside their family. Chaperoned by their mother, the pair enjoyed the festivities and dancing throughout the warm French summer.

In the group next to Estelle, other identifiable figures include Pierre-Franc Lamy, Norbert Goeneutte and Rivière himself. Goeneutte also features in Renoir’s La Balançoire (The Swing).

Amongst the swirl of dancers behind, other friends of Renoir (including Eugène Pierre Lestringuezand Henri Gervex) appear. Moving further back into the depths of dancers, Don Pedro Vidal de Solares y Cárdenas (a leading Cuban painter) wears striped trousers. He dances with a model named Marguerite Legrand.

Known as Margot, Legrand attempted to entertain surly Solares by dancing energetic polkas and singing risqué local songs. Another favorite model of Renoir, she sadly died just two years after this painting. Renoir helped care for Margot (suffering from typhoid) until her death, paying for her funeral and hospital treatment.

How much is the painting Bal du Moulin de la Galette valued at?

Bal du Moulin de la Galette is highly prized even amongst Pierre-Auguste Renoir famous paintings. While the larger painting remained in France, the smaller version resided with John Hay Whitney (US ambassador to the United Kingdom) for many years.

In 1990, Whitney’s surviving family sold the painting for $78 million at Sotheby’s auction house, New York. Purchased by Ryoei Saito (chairperson of the Daishowa Paper Manufacturing Company in Japan), it was one of the most expensive artworks ever sold.

Despite this, the paintings were saved when Saito later sold them through Sotheby’s to an unknown Swiss collector.

Where is the Bal du Moulin de la Galette now?

From 1897 to 1894, Gustave Caillebotte (the French painter and patron of the impressionist movement) owned the painting. On his death, ownership was transferred to the French state, in part payment for estate tax.

Bal du Moulin de la Galette continues as one of the most famous French oil on canvas paintings of the impressionist age. Of course, the artwork is also one of the most loved Pierre Auguste Renoir paintings, providing a fascinating insight into Parisian life and culture at the end of the nineteenth century.