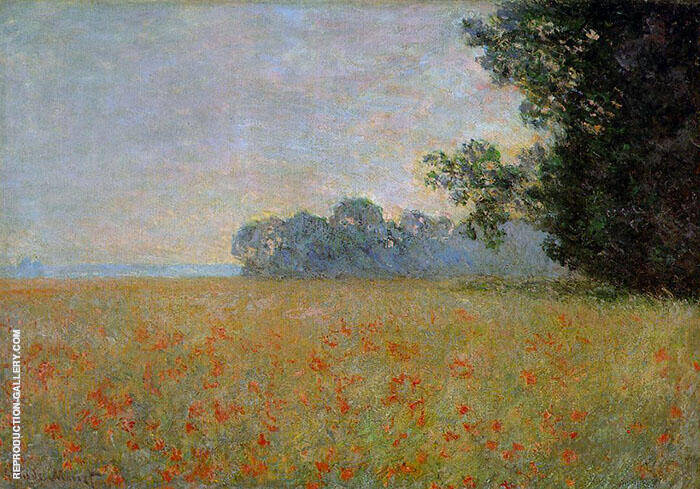 Claude Monet is universally accepted as the father of the Impressionist Movement, a title derived from his famous oil painting Impression, Sunrise 1872.

When Impression Sunrise was Exhibited in Paris in 1874, it was not considered a “notable piece” but history as re-written the narrative and it is now one of the world’s most famous paintings.

During the period 1870-1870, Monet’s concentrated on paintings of the towns along the River Seine.  One such painting is The Bridge at Argenteuil, which was painted in 1874 and is held by the National Gallery of Art in Washington.

The next decade finds Monet capturing the sunlit landscapes of the Mediterranean with paintings such as Palm Trees Bordighera 1884 and Antibes Viewed from La Salis 1888.

Many of his oil painting on canvas scenes were recreated many times, each one emphasizing the effects of the everchanging natural light occurring at differing times of the day.

Monet’s Haystack paintings and those of the River Seine were two particular subjects which were frequently revisited.

Haystacks, Effect of Snow and Sun 1891 and Haystacks Overcast Day 1884, Sunrise on the Seine c1890 and Morning on the Seine near Giverny 1897 provide clear illustrations of this technique.

Monet’s oil paintings are characterized by short visible brushstrokes.  He was a prolific artist and is estimated to have produced almost 2500 paintings during his lifetime.

He was born Claude Oscar Monet, in Paris, on November 14th 1840.  However, from the age of 5, Monet was raised in Le Havre.  His mother died in 1857 and his father was a merchant in the family shipping provisions company.

By the time he had reached 15, Monet had discovered his artistic talents and achieved a reputation locally, as a caricature artist.  It was through an exhibition of his drawings in 1858 that Monet met the French landscape painter Eugene Boudin.

It was Boudin who introduced a young Monet to plein air painting.  Plein Air painting, or painting outdoors, had a profound influence upon all of Monet’s famous oil paintings.

By 1859 Monet had committed himself to a career as an artist and he began to spend as much as possible time in Paris.  He studied at the Academie Suisse and it there he first met fellow student, Auguste Renoir.

During the 1860’s Monet was associated with the pre-impressionist painter Edouard Manet, and along with other aspiring French painters of the time, mainly Camille Pissarro, Pierre Auguste Renoir and Alfred Sisley, Monet’s destiny was realized and the Impressionist School of Artists was formed.

In 1874, Monet and his colleagues organized their own first exhibition. To the critics, their work seemed sketchy and unfinished (like a first impression), but during the 1870s and 1880s Monet gradually refined this technique.

In 1878 Monet moved to Vetheuil, before moving finally to his beloved house and gardens in Giverny, during 1883.

The gardens at Giverny offered Monet continual inspiration.  Monet Water Lilies paintings (also known Les Nympheas) became a dominant feature.  Monet’s first series of Water Lily paintings were completed during the period 1897-99 and he embarked on what was to become a lifetime of fascination.

Please enjoy our extensive catalogue of oil painting reproductions of Monet Water Lily Pond paintings, together with many other famous Monet paintings completed during his 43 years in residence in Giverny.

The gardens at Giverny provided Monet with constant and limitless pleasure; he planted the gardens with reference to color and an interest in botany became a central part of his life.

Many of the waterlily paintings are huge canvasses and Monet constructed an outdoor studio to accommodate them.

The Musee d‘Orangerie in Paris has provided a permanent exhibition of several large paintings, including the three panels comprising Reflections of Clouds on the Water Lily Pond c1920

Another popular Claude Monet fine art reproductions is The Artist’s Garden, Giverny, 1900 which is displayed at the Musee d’Orsay, Paris.

In 1920, whilst at Giverny, Monet started work on 12 enormous water lily paintings.  However, by this this time his eyesight was failing and he struggled to complete them.  Despite this, he did manage to carry on painting until his death in 1926.

Every Monet oil painting reproduction is hand painted one of our resident professional artists and all of our oil on canvas paintings are available in many size options.