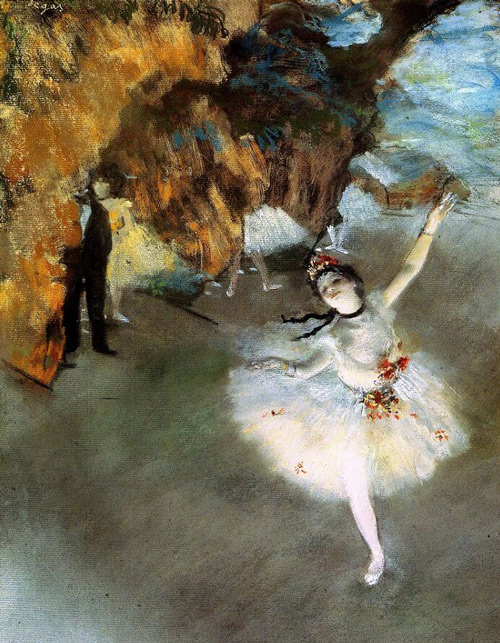 Edgar Degas' The Star is also known as  "l'Etoile” or  "Prima Ballerina."

Degas Ballerina paintings are some of our most famous dance paintings. The Star depicts a single ballerina dancing on stage. The theater lights focus so brightly on her that she shines like a star in the night sky.

Who was the Prima Ballerina?

The Prima Ballerina in the painting is the Spanish dancer Rosita Mauri who moved from Catalonia to Paris in the late 1870s.

Mauri gained significant acclaim at the Paris Opéra during this period, explaining her heightened position as the company’s Prima Ballerina.

In the painting, the woman dances “en pointe” (meaning on the tips of her toes), balancing gracefully and elegantly on one leg. Then, she performs her “pas seul,” leaping towards the orchestra pit with abandon.

Painted with Degas’ characteristically skilled draftsmanship and obsession with figures, she dominates center stage. The viewer transforms into her adoring audience.

Mauri’s white dress is decorated with flowers, while a black ribbon flies out behind her. Her eyes gently close, savoring the sweet moment at the end of a successful performance. The blush on her cheeks is visible, suggesting her movements' athleticism.

Why did Degas paint ballet dancers?

Degas' ballet paintings have come to typify his artworks. More than half his paintings depict dancers and ballerinas.

He also painted other depictions of women at work, for instance, milliners, laundresses, singers, and bar staff.  Famous paintings include  The Millinery Shop (1882), The Singer in Green (1884), and Woman Ironing (1887).

Most Edgar Degas ballerina paintings featured women rehearsing backstage. This emphasized their nature as professionals completing a job. In The Star, we also gain a rare glimpse into the background workings of Parisian theater, with fellow dancers and managers waiting in the wings.

Around this time, photography became popular. This allowed Degas to explore his fascination with movement even further, resulting in the quick brushstrokes and fleeting moments depicted in his ballerina artworks.

Degas' ballet paintings sold well, and he was able to raise money for his brother, whose debts nearly left the family bankrupt.

What does this painting represent?

This impressionist oil painting characterizes the movement’s luminous hope for the future, mixed with subtle elements of trepidation. Alongside many other artists of the time, Degas approached the coming century with mixed feelings of optimism and uncertainty.

While the painting represents the fleeting beauty of everyday life, there’s a sense all is not at ease. In a period of rapid industrialization and widespread changes in society, anxiety is evident.

The slightly threatening shadowy forms in the background of Edgar Degas’ The Star hints at these uncertainties.

Indeed, the entire left-hand side of the canvas is painted with violent, frenzied brushstrokes, overshadowing the dancer’s serene beauty. Such was the reality of Paris at the time, with the forces of modernity engulfing traditional ways of life.

Often controlled by male patrons, a ballerina’s life was far from glamorous. The foreboding black figures hint that while her life is brilliant on stage, it’s a much darker place off-stage.

The composition (with the woman’s arms creating a strong diagonal) further creates a dynamic effect. This energetic suspense adds to the beautiful movement of the ballerina’s dance.

Paintings by Degas, particularly his ballet dancer paintings, are some of our most beautiful art reproductions.