All Artists
M
MONET, Claude
Valley of the Creuse Sunset 1889 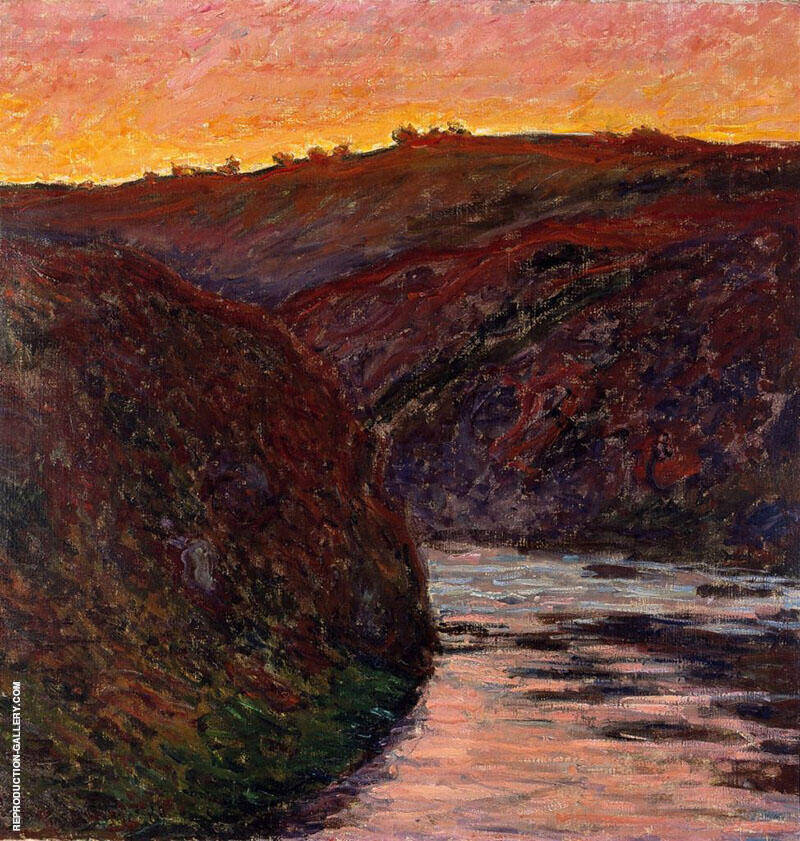 Who Is Claude Monet ?

Where was Monet Born?

Monet was born in Paris, but at aged five his parents moved to Le Havre in Normandy. His father was a businessman with a ship-chandling and grocery business, and wanted Monet to join the family business when he grew up. Monet however wanted to become an artist and his mother supported that decision, enrolling Monet into the Le Havre secondary school of art in 1851.

During his time at the art school Monet met Eugene Boudin who encouraged Monet to paint outside, introducing him to the en plein air technique of painting. Monet later said that Boudin had been his Master and to whom he owed his later success.

Monet’s mother died in 1857 and in 1858 he moved to Paris to continue his studies at the Academie Suisse, where he met fellow artist Camille Pissarro, who became a lifelong friend.

He was called up to military service in 1861, and was sent to Algeria to fight. He found the strong light and vivid colors of North Africa very influential on his concepts of art, and used them in his later work.

He returned to Paris in 1863 and continued his studies, meeting other lifelong friends, artists Pierre-Auguste Renoir and Frederic Bazille. Monet, Renoir and Alfred Sisley made frequent visits to Honfleur to paint. He painted the most important work of his early period, Le Dejeuner sur L’herbe, in 1865, which shows artists Gustav Courbet and Frederic Bazille at a picnic in the woods, together with Monet’ first wife, Camille Doncieux.

Through his career spanning eight decades, Claude Monet is famous for many paintings. However, because Impression, Sunrise named the Impressionist Art Movement, this painting is considered to be his most important work. Ridiculed in 1872 when it was first exhibited, and criticized for being unfinished and vague, it has become recognized as a masterpiece among French impressionist paintings. The painting is held in the Musee Marmottan Monet, in Paris.

Monet’s impressionist oil painting The Artists Garden at Giverny, painted in 1900 when Monet lived in Giverny, is considered a masterpiece of Impressionist painting, showing the garden that Monet had created at his home in Giverny. Monet was sixty when he painted this work showing rows of irises of pink and purple, with his house visible in the background. The paintings shows how Monet was a master of the use of light and shade, with the overhanging trees providing light and shade on the flowers. The painting hangs in the Musee d’Orsay in Paris.

Bridge over a Pond of Water Lilies, painted in 1899, also at his home in Giverny is owned by the Metropolitan Museum of Art in New York City. The painting is one of a huge number of paintings that Monet painted in the landscaped grounds of his Giverny home. As he became more famous and was selling paintings, he invested in more land and created a large lily pond with a Japanese bridge. In 1899 Monet painted a series of eighteen views of his lily pond, twelve of which, including this painting, were painted in the summer of 1899.

Held by the National Museum of Western Art in Tokyo, Japan, Water Lilies, 1916 is one of the many water lily paintings that Monet painted in Giverny. He  adapted his studio with a large glass wall so that he could paint from the studio looking out to his garden and lily pond, and has his easel put on wheels so that he could move it easily around the studio.

Claude Monet famous paintings include Irises and Water Lilies which was painted by Monet in 1917, again in his garden in Giverny. The painting is in a private collection.

Also held by the Metropolitan Museum of Art, Poppy Fields near Argenteuil, painted in 1875, is one of four quite similar paintings that Monet painted in fields on the plain of Gennevilliers, close to his house at Argenteuil. The painting shows two poplar trees on the edge of the poppy field with Monet’s son Jean in the foreground. The river Seine can be seen at the very left of the painting.

Where Did Claude Monet Live?

Monet married Camille in 1870, and went to live in London and Amsterdam due to the outbreak of the Franco-Prussian War. In London, Monet met up with his friend Pissarro and the American painter James Abbott McNeill Whistler. Monet also became friends with the influential art dealer Paul Durand-Ruel, which was a milestone event in his career.

In London, Monet admired the paintings he saw by the English landscape artists John Constable and JWM Turner. Monet was particularly impressed with Turner’s use of light, and in particular Turner’s paintings of fog on the river Thames. There is no doubt that this feature of Turner’s work was an influence on Monet in general, and in the painting of Impressionist, Sunrise, two years later.

Monet also painted many works featuring the river Thames, as well as paintings of Hyde Park and Green Park, in central London.

In 1871 Monet returned to France to live in Argenteuil, North West of Paris, and near to the banks of the river Seine, even buying a boat and adapting it to a floating studio. Monet signed a long lease on a house in Argenteuil and for the first time, began to plan and design a garden that would become the subject of his paintings.

Monet’s wife Camille became serious ill in 1876, and eventually died of uterine cancer, in 1789. Monet was suffering financial difficulties at the time and stayed with a patron and friend Ernest Hoschede. Monet began to move away from the Impressionist movement that he had founded in favor of painting more acceptable works that would sell. He became close to Hoschede’s widow, and married her in 1892, moving to Giverny, in Normandy.

Where Are Monet's Gardens?

Monet’s financial problems eased after trips to Bordighera, on the Italian and French border, as well as to the Netherlands. His paintings were sold in America, which gave him a financial security not previously available to him.

With Durand-Ruel selling more of Monet’s paintings, Monet began to develop his garden in Giverny, as he had previously in Argenteuil, but to a much greater extend that his additional income allowed. He built a second studio and a greenhouse, and employed numerous gardeners to maintain and expand the gardens. He bought more land, imported plants and waterlilies in colors not available domestically in France, and expanded his water garden, the Claude Monet water lily pond.

It was here at Giverny that Monet began his series of paintings of the same subject, haystacks, poplar trees, the cathedral at Rouen that he is famous for. The paintings were universally popular and brought Monet financial success and stability.

It was at Giverny also that he began his most famous series of paintings, Water Lilies by Claude Monet, which occupied the remaining twenty years of his life. He exhibited the first of the Japanese Bridge paintings in 1900, and then travelled to London to paint forty one paintings of Waterloo Bridge, thirty four of Charing Cross Bridge, and nineteen paintings of the Houses of Parliament.

By 1909, Monet had reached a point of near abstraction in his water lily paintings and exhibited forty two paintings at the Durand – Ruel gallery, which was a great success.

Monet’s second wife died in 1911 and his oldest son Jean, in 1914. At this time, Monet’s eyesight began to fail due to cataracts, and this severely affected his work, and limited his previously significant output of paintings.  He avoided surgery to remove the cataracts, and in 1922 he received a treatment of drugs to dilate his pupils and this gave Monet a short term benefit, although he did have cataract surgery in 1923, which did help him. He destroyed many of the works he had painted in previous years, which he could now see properly and regarded as inferior. He began to repaint and retouch the remaining works he had painting with poor eyesight which resulted in far brighter colors than previously seen.

In the 1920’s the French government built a pair of oval rooms in The Orangerie, now linked to the Louvre, in Paris, for Monet to paint and then exhibit his series of eight water lily murals. Claude Monet water lily pond paintings, known as the Nympheas paintings, were enormous in scale and although painted on separate canvasses, they measured some two meters high by ninety one meters in length.

Monet was involved in the design of the two oval shaped rooms and worked with the architect to ensure that his gift to the French state would be seen in the best possible way. Monet insisted that the building was constructed with glass roof panels so that the paintings would change their perspective depending on the time of day that they were viewed and even when the sun was out or the weather was overcast and cloudy. These rooms at the Orangerie have been called “the Sistine Chapel of Impressionism” by artist Andre Masson.

When Did Claude Monet Die?

Monet died in December, 1926, at the age of 86. He is buried in the Giverny church cemetery, close to his home. His house and garden, including the water lily pond was gifted to the French Academy of Fine Arts by his son Michel.

Despite the popular reception of the water lily paintings in the Orangerie in 1927, Claude Monet art was largely ignored for many years after his death.

However, in the 1940’s and 1950’s, the Abstract Expressionists, notably Mark Rothko and Jackson Pollock began to take note of Monet’s very large canvasses and his semi-abstract compositions.

Pop artists such as Andy Warhol took note also of Monet’s repeated series of work, such as the Haystack and London Bridge paintings, with Warhol for example painting a series of Marilyn’s, Chairman Mao, and Che Guevara.

Nearly one hundred years after his death Monet is still setting new records for his paintings. In 2019, auction house Sotheby’s sold Monet’s Meules, 1890, one of his series of Haystacks paintings, for $110,747,000, a record price for the artist, and making it one of the most expensive paintings ever sold.

Discover the many Monet oil painting reproductions available from our online catalogue. 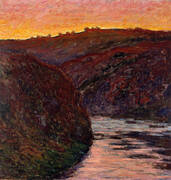 Valley of the Creuse Sunset 1889
By Claude Monet