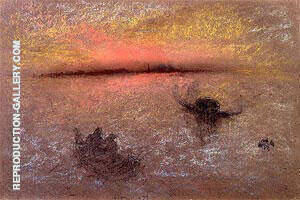 Whistler’s parents were based in Lowell, Massachusetts (USA). It was a small but picturesque city, and the family provided their son with a comfortable upbringing. Whistler’s father was a civil engineer, and the young boy consequently joined his parents on travels all over the world. They lived in St Petersburg, Russia for a short while as well as the UK.

Despite all this travel, Whistler and his family returned to the USA in 1849. The young man enrolled at the United States Military Academy at West Point, but before too long before he discovered that art was his true calling.

Whistler’s exposure to cosmopolitan Europe, led to a fascination with Parisian culture where the French realist movement was picking-up pace. As a result, in 1855 James McNeill Whistler moved to Paris to study painting with the masters. He found the paintings of contemporary artists such as Gustave Courbet and Henri Fantin-Latour particularly enlightening. Many early James McNeill Whistler paintings reflect their strong realist drive.

Pioneered by Gustave Courbet, the realist movement centered around real people in rural locations. The figures are often working and the paintings reflect strong concern for workers’ rights alongside social and political reform. James McNeill Whistler works illustrate this most clearly in his London oil paintings. These particular paintings Incorporate a muted color palette and “everyday” depictions, with paintings such as Brown and Silver: Old Battersea Bridge (1859), The Thames in Ice (1860) and Wapping on Thames (1860-1864).

During the early 1860’s, Whistler visited Brittany and Biarritz in France. It was here he discovered a love of the sea that would shape so many of his later paintings. He returned to this theme in later life, with The Bathing Posts Brittany (1893).

Whistler settled permanently in London in 1863, where he continued painting the River Thames. At around this time his portraiture paintings started gaining critical appreciation. In 1863, Whistler’s painting, Symphony in White No. 1 was displayed in Paris at the Salon des Refusés. The famed critic Charles Baudelaire took note, particularly admiring Whistler’s Pre-Raphaelite inspiration, taken from his previous short stays in the UK.

The influence of British artists such as Dante Gabriel Rossetti (a leading Pre-Raphaelite) is even more noticeable in Whistler’s Symphony in White, No. 2. Beautiful, pale and auburn-haired women with floral patterns and wistful gazes were characteristic of this romanticized movement.

The Princess from the Land of Porcelain portrait was also created around this time. Here, the amalgamation of pre-Raphaelite and Japanese styles is evident; with a woman in Japanese dress standing amidst Asian art objects. These include a Japanese folding screen, vase, fan and a large decorative porcelain vase. The brushstrokes fall on the canvas in a highly impressionistic manner, reflecting Whistler’s interest in the burgeoning French art scene.

The influence of Japonisme is also evident in Symphony in White, No. 2 (particularly in the fan and the vase). This was a trend taking hold across fashionable European society, and Japanese culture fascinated Whistler. He was particularly intrigued by the picturesque elements of stylized Japanese landscapes and seascapes.

James Whistler’s art. with its stunningly stylized landscapes and seascapes truly matured in his five Nocturne oil painting masterpieces. These include Nocturne in Blue and Gold (Valparaiso Bay), Nocturne in Blue and Silver (The Lagoon Venice) and Nocturne in Black and Gold (The Falling Rocket). Whistler developed a new painting technique in the course of creating these paintings, using incredibly liquid paint. The artist swept it over the canvas in long sweeping strokes, reminiscent of Japanese calligraphy.

Whistler’s controversial Nocturne in Blue and Gold (Battersea Bridge) was later used as evidence at the “Whistler-Ruskin” trial of 1878. The artist sued Ruskin (a leading critic) for libel. Ruskin criticized Falling Rocket, citing the “ill-educated conceit of the artist” demonstrating “Cockney impudence” by “flinging a pot of paint in the public’s face”.

Although Whistler won the case, he had to pay his own, and not insubstantial, legal costs. This led to the artist declaring bankruptcy in 1879 and having to leave his much-loved White House studio in Chelsea.

From the 1870s onwards, Whistler focused more on portrait painting. He created works in a characteristic muted color palette. The most notable of these is Whistler’s famous painting,  Arrangement in Grey and Black No. 1 The Artist's Mother (1871), reflecting Whistler’s love of simple forms and compositions. The influence of the renaissance Spanish painter Diego Velázquez is also evident.

After the disastrous legal trial, Whistler moved to Venice with his lover Maud Franklin. They stayed in the Italian city for just over a year, where Whistler produced exquisite watercolors and etchings. One of his most accomplished watercolors, The Yellow Room (1883-84) depicts Franklin, who posed for more than sixty Whistler paintings.

Whistler’s etchings were especially well received on his return to London in 1880. Alongside Whistler’s portrait paintings, they secured his place in leading bohemian society. He rivaled Oscar Wilde for scandal, and indeed, the two were troubled acquaintances. Whistler frequently threw lavish parties and lived up to the stereotype of “outsider artist”.

Whistler married Beatrix Godwin in 1888 and the couple moved back to Paris, living on the Left Bank. She died just eight years later, leaving Whistler heartbroken. It was a long, difficult illness where “Trixie” suffered severely from cancer. Whilst he maintained correspondence with friends and ran an art school in Paris (which closed in 1901), his creative period was over.

Despite his popularity with the urban upper-classes, Whistler struggled maintaining pace with artistic developments in later life. His critical reception declined, and he felt he was falling behind the bright, vivid colors of the later post-impressionists. Remaining true to himself, Whistler always preferred painting smaller studies of cities and seascapes, more in line with his early realist inspiration from the likes of Camille Corot and Gustave Courbet.

James Abbott McNeil Whistler died on 17 July 1903. Whilst in later years he painted minimalist seascapes and portraits towards the end of his life he found painting difficult, due to increasing frailty. One of his last portraits was a depiction of Dorothy Seton (Daughter of Eve); a woman who had modeled for him since 1900.

We offer an unparalleled selection of James McNeill Whistler oil painting reproductions to choose from. The beauty and delicacy of James Whistler replica art on canvas continues to delight and astound, securing his place in the canon of great American painters.