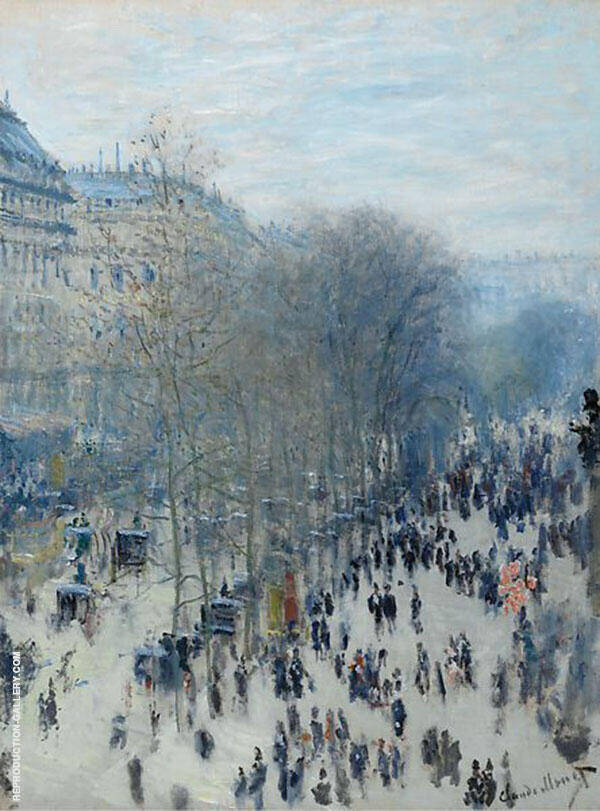 Boulevard des Capucines by Claude Monet is one of the most iconic cityscape paintings ever produced.  This impressionist oil painting is a work of beauty and mystery, capturing everyday Paris life in the late nineteenth century.

Painted between 1873 and 1874, Monet’s Boulevard des Capucines is an oil on canvas artwork. Measuring just 80 by 60 centimeters, it represents one of Paris’s most famous streets.

In late 1873, Monet joined a group of young, ambitious artists. But unfortunately, these artists were all rejected by the highly traditional Salon de Paris. Instead, they formed their own organization, the “Société anonyme des artistes peintres, sculpteurs et graveurs”.

Exhibiting their work independently, these artists (including Monet, Pissarro, Sisley, and Renoir) launched several displays. Their work resulted in the First Impressionist Exhibition of April 1874. They held the exhibition at the photographer Nadar’s apartment, overlooking the Boulevard des Capucines.

Including other Claude Monet art, such as Impression Sunrise, the show also featured several cityscape paintings. Chief among these was Monet’s depiction of this famous street.

Why did Claude Monet paint this street scene?

Each figure stands alone on the snow-covered pavement. Yet, despite this, each person also merges into groups of gray and black shapes.

The road rises towards the viewer, enhancing the feeling of dynamism and energy. Indeed, Monet often played with perspectives and viewpoints to enhance the disjointed experience of urban modernity. The double perspective lines formed by the apartment buildings, lines of wintry trees, and black cabs further force the viewer’s gaze into the artwork.

Describing the painting, the critic Ernest Chesneau described how, from a distance, the scene is a “masterpiece” depicting a constant “stream of life”.

Even so, he represented critical attitudes of impressionist art at the time. Chesneau also described how detail “vanishes” on closer inspection and turns into an “indecipherable chaos of palette scrapings”.

He felt Monet should continue working on the piece and transform his “sketch” into a finished painting. Nonetheless, even Cheseneau saw the potential of this new impressionist style. He described how Monet’s Boulevard resounded “far into the future” for those listening carefully.

Where was the location of Monet's impressionist oil painting?

The “Boulevard des Capucines” is a street in Paris. It’s one of the “Grand Boulevards”, a series of wide avenues built around the city from the late 1660s onwards.

The road’s name derives from a religious convent of Capuchin nuns. Their monastery gardens backed onto the south side of the street. Destroyed and abandoned during the French Revolution of 1789, this new boulevard celebrated the religious order.

In total, the road is 440 meters long and 25 meters wide. Stretching across the 2nd and 9th arrondissements, it was a bustling and creative center.

The French photographer Nadar lived on No. 35 on Boulevard des Capucines. This home was a meeting place for the young impressionists, including Édouard Manet, Camille Pissarro, Pierre-Auguste Renoir, and Claude Monet.

Monet painted this work from the window of Nadar’s apartment.

Where is the original Boulevard des Capucines?

Monet’s Boulevard des Capucines currently hangs in the Nelson-Atkins Museum of Art. Based in Kansas City, Missouri, the gallery boasts a significant collection of impressionist art.

Monet painted two versions of the Boulevard des Capucines. The other version is horizontal rather than vertical but contains many similar details. Scholars are uncertain which version was the genuine “original”. This version hangs in the Pushkin Museum in Moscow.

While the dates remain uncertain, some art historians favor the Moscow version as the painting that appeared in the 1874 Impressionist exhibition.

As one of the top 100 famous paintings, Monet's impressionist oil painting represents a pivotal moment in the artist's career and a masterpiece from the early impressionist art movement.