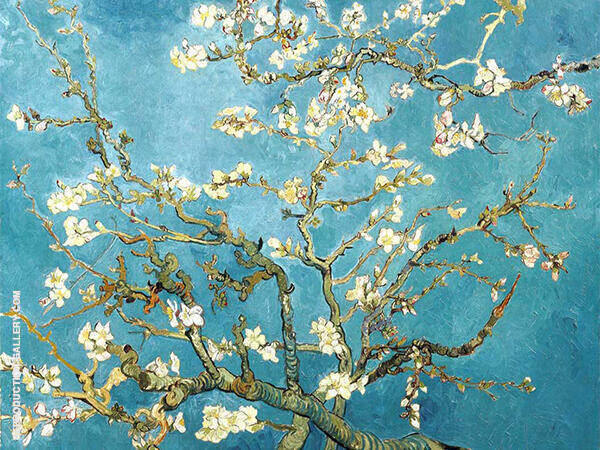 Van Gogh Almond Blossoms, with its sprawling branches and blooms set against azure skies, is part of a series of famous paintings by Vincent van Gogh.

Almond trees flower early in the Spring in the South of France. They symbolize new beginnings and a fresh start, a perfect subject for an artist celebrating a new life.

Why did Vincent van Gogh paint the Blossoming Almond Tree?

Painted in 1890, Almond Blossoms was a gift from Vincent van Gogh to his brother Theo. Theo and his wife welcomed a baby son named Vincent Willem into the world.

Theo wrote to his brother, saying, “we’ll name him after you.” He wished the child would be as “determined and courageous as you.” The adult Vincent was understandably delighted at the happy news.

Van Gogh’s nephew was born on 31 January 1890. He stated the birth brought more pleasure than he “could express in words” and began painting immediately.

Van Gogh naturally chose one of his favorite themes to celebrate the occasion. He painted many variations on blossoming trees over his lifetime, returning to the theme repeatedly.

Van Gogh completed this oil on canvas painting while residing in the mental asylum at Saint-Rémy, where he was admitted after a mental health crisis that resulted in the severing of his ear.  This was a period of extreme highs and lows.  Van Gogh finished the canvas during a time of improving health and frenetic activity.

However, this had severe consequences and resulted in another severe mental breakdown.  Van Gogh's relapse lasted over two months, and he missed the remaining blossom season.

What style of art is Almond Blossoms?

Vincent van Gogh flower paintings are a fascinating mix of post-impressionist and Japanese influences. Van Gogh's paintings are less about stylistic concerns and more about his constant search for serenity and peace.

Famed for their loose, expressive brushstrokes, post-impressionist painters revolutionized depictions of nature. Yet, despite his post-impressionist roots, Van Gogh’s Almond Blossoms reveals a delicacy and precision drawn from Japanese art.

The perspective is also highly unusual as if Van Gogh were lying below the branches observing them close-up. But, again, this perspective draws from Japanese printmaking, which often zooms in on specific details from nature. Hiroshige’s Plum Garden was a particular influence, utilizing flat patterns of vivid color with minimal shadows.

Of course, Van Gogh’s subject matter itself also draws from Japanese culture. The Japanese even have a word for appreciating the transient beauty of new blossoms; “hanami.”

Where is the original Van Gogh Almond Blossom painting now?

Because of its incredibly personal backstory, the Van Gogh family deeply cherished this painting. It originally hung over the piano in Theo and Jo’s living room as a treasured gift from a beloved brother.

After Theo died in 1891, Jo took the painting to Bussum in North Holland. Here, the artwork took pride of place in young Vincent Willem’s bedroom. However, while Jo sold several of the Van Gogh artworks in her possession, she never sold the Almond Blossoms painting.

In a pleasing end to the narrative, the adult Vincent Willem later founded the Van Gogh Museum in Amsterdam. The original oil painting remains on public display at the museum today.

Van Gogh Almond Blossoms is just one of the many oil paintings featured in our art collection of famous tree paintings. In addition, oil painting reproductions are available in several color options to accommodate contemporary decorating trends.