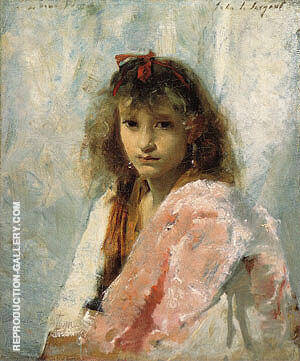 John Singer Sargent was born on January 12th 1856.  He was an Italian American painter, famed for his elegant portrait paintings of Edwardian society.

In 1874, Singer Sargent traveled to Paris to study portrait painting with Carolus-Duran who was known for his portraits of high-society individuals in Third Republic France.  Carolus-Duran particularly admired the paintings of Diego Velázquez, a passion which he passed onto a young Singer Sargent

During this formative period in France, Singer Sargent also experimented with new impressionist and realist techniques. This influence stayed with the artist throughout his life and is evident in his later, loose and light brushwork paintings.

Singer Sargent exhibited at the Paris Salon in 1877. He won an Honorable Mention in 1879 and a Second-Class medal in 1881. Sargent’s work from this period reflects his travels around Europe and further afield. One of the most notable Singer Sargent paintings is the theatrical oil painting, El Jaleo. Completed in 1882 (although preparatory studies were done much earlier), John Singer Sargent’s El Jaleo depicts a Spanish gypsy dancer performing spiritedly. The painting was Inspired by a five-month trip to Spain and North Africa in 1879. At the time it caused a sensation. The dramatic shadows cast on the back wall create a dynamism which was truly revolutionary for portraiture paintings of the time.

In 1879, Sargent returned to Europe. Whilst visiting Madrid he studied the work of Diego Velázquez and when in Haarlem in the Netherlands, he enjoyed the famous portraits of the Dutch Golden Age painter, Frans Hals. Singer Sargent was inspired by the old masters and subsequent to this trip, his paintings utilized a dark, jewel-like color palette.

A Parisian Beggar Girl 1880, reflects Singer Sargent’s shift towards portraiture. Whilst he later worked almost exclusively with the upper echelons of society, this oil on canvas painting provides a rare glimpse into a more naturalistic model; in this case, the young woman was Carmela Bertanga.  Indeed, many early John Singer Sargent artworks deal with peasant families and young children as his subjects. These paintings focus on light, tone and brushwork with reflected impressionist concerns. Singer Sargent mixed these painterly qualities with his own brand of astounding realism

Singer Sargent also experimented with more exotic subject-matter around this period; Fumée D'ambre Gris (Smoke of Ambergris) is one such painting. Ambergris is a waxy substance (extracted from whales) used in religious rituals and famed for its aphrodisiac qualities. Whilst started in Tangier, the suggestive painting was completed in Singer-Sargent’s Paris studio. It reflects Western fantasies and romantic depictions of North Africa which were common during this era.

Today, Madame X is the most famous John Singer Sargent painting. It was introduced at the Paris Salon of 1884 and portrays a celebrated society beauty. Featuring Madame Gautreau, Singer Sargent considered this painting to be his finest masterpiece. He was consequently devastated when the painting was roundly attacked and scandalized at the Paris Salon. The “indiscreet” pose and the revealing dress provoked outrage amongst Parisian society. Sargent subsequently left Paris for London. Hoping for better success he moved into James McNeill Whistler’s old studio in Tite Street, Chelsea.

Despite the move to England, John Singer Sargent portraits were too risqué for contemporary tastes. Indeed, The Pall Mall Gazette voted one of his works (The Misses Vickers) the “worst picture of the year” in 1886. Another early work that received a mixed critical reception was The Daughters of Edward Darley Boit (1882). The influence of Velázquez and Las Meninas is particularly evident in this un-sentimentalized and psychologically compelling group portrait.

Luckily for Singer Sargent however, his luck was about to change. An earlier work, Carnation Lily, Lily Rose (1885) captured the hearts of the British public. He painted the image during a stay in Broadway (a picturesque English Cotswold village) whilst in the company of leading Anglo-American artists and writers. With its nostalgic and sentimentalized portrayal of two young girls, Singer Sargent successfully tapped into high-society tastes. The influence of Japonisme can also be observed, with the delicate floral touches, and children lighting Japanese lanterns.

From this moment on, Singer Sargent portrait painting were sought by the leading members of British and American society. Each client paid on average $5,000 for a full-length portrait.  His quick brushstrokes, bold touches and bright palette of color created the impression of a fleeting, intimate moment.

This is perhaps best illustrated in the articulate handling of Lady Agnew of Lochnaw’s Portrait (1882). In this Singer Sargent portrait painting, the sitter’s piercing eyes gaze directly back at the viewer, whilst the delicate fabrics of her dress are represented in an amazingly free style.

Singer Sargent also painted other famous artists of the time, with paintings such as Claude Monet Painting by the Edge of the Woods (1885) and Dennis Miller Bunker Painting at Calcot (1888).

Singer Sargent’s romantic life has been the subject of scholarly debate. He was a life-long bachelor with both male and female lovers. The sensitive depiction of the male form is particularly evident in an early work Man Wearing Laurels (1874-80) and the later Nude Study of Thomas E McKeller (1917-20). The latter is particularly unique for its direct, unabashed treatment of the full-frontal male nude. Albert Belleroche is widely accepted as Sargent’s primary partner, and he is featured in multiple intimate and loving portraits throughout the artists’ career.

From 1910 onwards, Sargent discarded portraiture in favor of murals and landscapes. He often spent the Summer and Autumn of each year painting landscapes across Europe. These mostly consisted of French and Italian alpine landscapes created with watercolor paints. Taking inspiration from the likes of J.M.W. Turner, Sargent moved towards romantic and impressionist techniques. Camouflaged Field in France (1918) and A Wrecked Tank (1918) combine the tradition of romantic landscapes with the horrors witnessed across Europe in the carnage of World War One.

Singer Sargent was heavily involved in the American art-scene in later life and co-founded New York City’s Grand Central Art Galleries in 1922. His later murals included a commission for the Boston Public Library and the Museum of Fine Arts, Boston.

After the Grand Central Art Galleries held a major retrospective of Sargent’s work in 1924, he returned to London but was battling heart disease. John Singer Sargent died at home on April 15th, 1925.

Buy John Singer Sargent oil painting reproductions. Oil on canvas art is available in many size options.  Replica oil paintings are created entirely by hand by one of our resident professional artists. 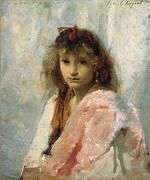