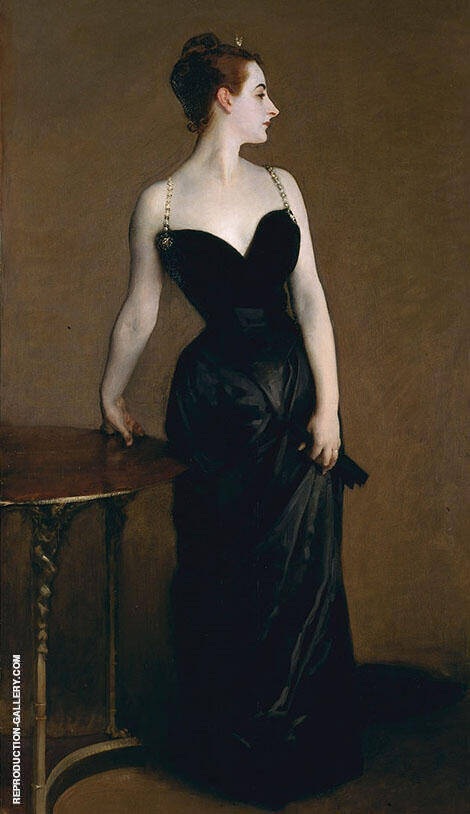 Portrait of Madame X truly stands the test of time as one of the most famous paintings by John Singer Sargent.

Who was the real Madame X?

Famed as a tremendous Parisian beauty, the lady in John Singer Sargent’s Madame X is Madame Pierre Gautreau. Born in Louisiana in 1859, her name was Virginie Amélie Avegno.

Singer Sargent finished the painting in 1884.  Madame Gautreau poses in a black satin dress with delicate jeweled straps, and her pale, almost translucent flesh contrasts with her jet-black dress and the somber background.

Sargent hoped to increase his fame and social standing by exhibiting the portrait of Madame X at the Paris Salon. He consequently painted the artwork without a commission, personally asking Madame Gautreau if she’d sit for him. A request of this nature was a rarity for the time and a daring move for a comparatively little-known artist.

Madame Gautreau previously refused similar requests from other artists but accepted Sargent’s proposal. Like Sargent, she was also an American expatriate in Paris and admired John Singer Sargent portraits.

He traveled to her estate in Brittany in 1883, creating over thirty preparatory sketches.

Why is this portrait so controversial?

With Madame Gautreau’s assistance, Sargent emphasized her audacious sense of style and individuality. As work progressed on the portrait, she delighted in Sargent’s artistic genius.

However, the work was controversial for several reasons, most notably the delicate dress strap falling from Gautreau’s right shoulder.

Indeed, Gautreau was not just famous for her beauty but was also the subject of numerous rumors suggesting her infidelities towards her wealthy banker husband. She always wore lavender powders, and her distinct attractiveness garnered substantial attention.

The painting was displayed at the Paris Salon of Exhibition in 1884.  The finished portrait was ridiculed and rebuked, mainly due to its direct presentation of sexual promiscuity and confidence.

Despite attempts to preserve the anonymity of the sitter, Gautreau’s mother consequently requested the removal of the painting. Public consternation was so great that Sargent repainted the right shoulder strap so it firmly sat on Gautreau’s shoulders. He also renamed the artwork “Madame X” to emphasize its mysterious and dramatic qualities.

Gautreau was humiliated, and John Singer Sargent left Paris shortly afterward. The reputation of Singer Sargent artworks never recovered in France, but the publicity proved positive for the artist in Britain and America.

Where is the painting Madame X by John Singer Sargent?

After the painting's initial debut at the Paris Salon, Sargent retained possession of the artwork, and it was stored in his Paris atelier and later in his London studio.  Singer Sargent later exhibited

In 1916 Madam X sold to the Metropolitan Museum with Sargent saying it was "the best thing I've ever done."

The original portrait of Madame X remains in New York, while a second unfinished version (with the position right shoulder strap remaining elusive) hangs in the Tate Gallery, London.

John Singer Sargent oil painting reproductions are an essential part of our catalog of portrait paintings and are available in many size options.