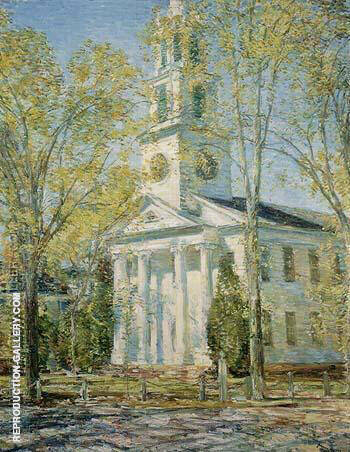 He was one of the most influential American Impressionist artists of the 20th century.

During his lifetime he is known to have produced over three thousand paintings in oils and watercolor, as well as etchings and lithographs.

Childe Hassam’s Flag series paintings, depict the parades that he saw from his Fifth Avenue apartment windows. The parades were used to sell Liberty Bonds, which assisted the government to fund its involvement in the First World War.

There are over thirty Childe Hassam flag paintings, all of which were completed during the period between 1916 and 1919. Of these, Childe Hassam’s Avenue in the Rain 1917 is probably the most famous as it was prominently displayed in the Oval Office of during the Obama presidency.

Hassam’s Avenue in the Rain has been in held in the White House Art Collection since President Kennedy.

Childe Hassam flag paintings are also held by The Metropolitan Museum of Art who hold Avenue of the Allies, Great Britain, whilst The New York Historical Society have two paintings; Flags on Fifty-seventh Street, and Childe Hassam’s The Fourth of July 1916.

Hassam showed an interest in art from an early age and had his first lessons in drawing and watercolor while a pupil at the Mather School, the oldest public elementary school in North America. A massive fire in the Boston commercial district in 1882, destroyed his father’s business. Hassam left high school at just 17. In order to assist and support his family, he worked for a publishing house in Boston.

Hassam studied wood engraving and created designs for commercial engravings for letterheads and newspapers. Hassam continued to paint, mainly in watercolor, and only started with oil painting on canvas in 1879.

In 1882 Hassam set up his own studio as a free-lance illustrator; and specializing in illustrations for children’s stories. He was commissioned by magazines such as Harper’s Weekly. He continued to paint and took classes at the Lowell Institute and the Boston Arts Club.

In 1883 his first solo exhibition at an art gallery in Boston was well received. However, as he had almost no formal art training, Childe Hassam decided to go to Europe on a two-month study trip with his friend Edmund H. Garrett, who was a fellow member of the Boston Arts Club and who was already an accomplished artist.

Hassam and Garrett visited the U.K. the Netherlands, France, Italy, Switzerland and Spain, studying the Old Masters and painting watercolors of European landscapes. In England, Hassam was very impressed with the watercolors of J. W. M. Turner, and during this trip he produced sixty-seven watercolors which then formed the basis of his second exhibition which took place in 1884.

An early oil painting, A Back Road, 1884, held at the Brooklyn Museum, shows Hassam’s admiration for the American painter William Morris Hunt, who followed the European Barbizon School, working directly from nature.

Also in 1884, Hassam married a family friend, Kathleen Doane. Little is known of their private life, other than she was heavily involved in making travel arrangements for their frequent trips abroad.

Childe Hassam is also noted for his landscape paintings of coastal scenes and his first cityscape painting, Boston Common at Twilight, was painted in 1885.

In 1886, Childe Hassam and his wife moved to Paris so that he could study at the prestigious Academie Julian. Hassam felt the Academie was too formal and in his own words “crushes all originality…”.

He began to paint Parisian street scenes, using a palette of mainly brown colors, but these were very much looked down on by the Impressionists in general. He sent these paintings back to Boston for sale and the proceeds of these, and his previously painted watercolors, allowed the Hassam’s to continue to live in comfort in Paris.

Subsequent Childe Hassam paintings adopted a softer style, using the light with freer brush strokes. He took on the look and form of the French Impressionists, and he was undoubtedly influenced by the paintings he saw regularly in the museums and exhibitions in Paris. He placed four paintings in the Exposition Universelle of 1889, and was awarded a bronze medal.

In 1889 Hassam and his wife returned to the United States and set up home in New York City. They took an apartment on Fifth Avenue and the view from the apartment was used in Hassam’s first New York oil painting, Fifth Avenue in Winter. Another painting, by contrast, Washington Arch in Spring, 1890, showed a much expanded palette using much brighter colors and this was the start of Hassam’s move to a far more Impressionist approach, both in his oils and watercolors, at a time when the European Impressionists were progressing towards Fauvism and Post-Impressionism.

Hassam continued paintings the street scenes that he could see from his windows; men in top hats and bowler hats, fashionable women and children, and the horse drawn carriages driving along the streets. Typically, Hassam would walk the streets and sketch a series of scenes from several locations and then return to his studio to make individual composite oil paintings on canvas.

Hassam and his wife vacationed at various art colonies during the Summer months. Appledore Island, in the Isles of Shoals, off the coast of New Hampshire was a favorite destination.  They stayed with Celia Thaxter and her family, who owned property on the Island.  Childe Hassam’s Moonlight, Isle of Shoals 1892, was painted during one such visit.

Celia Thaxter’s Garden, Isle of Shoals and Poppies Isle of Shoals 1891 are just two of Hassam’s flower paintings with views of the coast and the rocky shoreline. Thaxter’s salon attracted not only prominent artists, but also the wealthy collectors who came to stay on the island.

During the economic slump of 1896, when his paintings were struggling to sell, Hassam decided to return to Europe. He and his wife first went to Naples, then on to Rome and Florence, where he spent his days in museums and churches, studying Old Masters paintings. They moved on to Paris, and then to England.

All these artists were former members of the Society of American Artists. Winslow Homer decided not to join, although had been asked, and when Twachtman died in 1902, William Merritt Chase replaced him in the group. The first show of paintings by these artists was held at the Durand-Ruel Gallery. However, seven of Childe Hassam’s paintings were not well received by the critics.

After what was seen as a midlife crisis, when he began drinking and suffering bouts of depression, Hassam took on a healthier lifestyle and began to paint outdoors again. He said that he felt less enamored with urban life, and as the city skyline began to change, with skyscrapers taking over from mansions and the low-rise buildings of the previous years, Hassam changed the perspective of his urban landscapes, with people smaller in size than in his previous works.

He began to paint away from New York, especially in the Summer months, when he travelled the country finding new subjects to paint, such as the long vistas in Oregon.

By 1909 and after a long period of clever marketing of his paintings, Hassam was receiving as much as $6,000 per painting. This funded a further trip to Europe in 1910. However, he found Paris had changed in much the same way as New York, and that year he painted July Fourteenth.

Upon his return to New York, and until 1920, Hassam began a prolific period of painting.

He returned to Celia Thaxter’s house on Appledore Island and painted a series of watercolors of coastal scenes, as well as some still life works in oil.

Towards the end of his life, Hassam bought a house in East Hampton, Long Island.