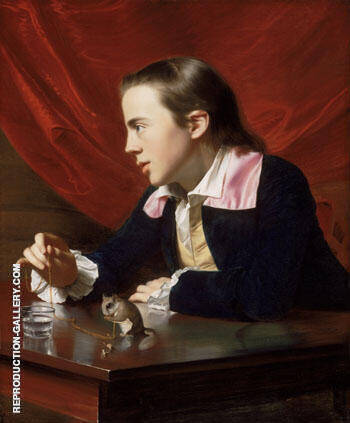 John Singleton Copley was an American artist born in Boston to Anglo-Irish parents. Copley is most famous for his portrait paintings of important colonial American figures. John Copley moved to London in 1774 where he was commissioned to paint portraits of the British Aristocracy. Whilst in England, he was introduced to Sir Joshua Reynolds, England’s most famous portrait painter of the day. Copley embarked on a European Tour, going to Paris, Rome, Naples, Venice and then to Holland. John Singleton Copley is considered to be the most influential American portrait painter of the colonial era and is known to have painted over 350 oil paintings.

Henry Pelham Boy with a Flying Squirrel was painted by J.S. Copley in 1765

Henry Pelham Boy with a Squirrel 1765
By John Singleton Copley