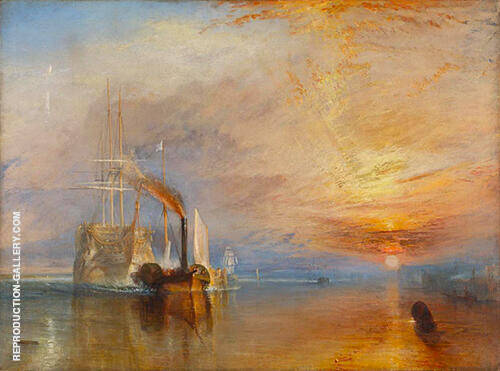 Why did Turner paint The Fighting Temeraire?

Amongst J.M.W. Turner paintings, The Fighting Temeraire is mainly symbolic. Turner painted the work to depict the ship (and British naval superiority) in a historical and nostalgic light.

For this reason, he painted the three lower masts partly rigged, with their sails furled. In reality, the ship’s masts had already been removed. Turner also painted the ship in white and gold (as opposed to the real black and yellow) to give it a calm, ghostly presence.

Adding to the narrative, Turner’s crimson sunset (at the right-hand side of the painting) suggests death followed by transition; illustrated by a fiery sunset, the crescent moon rises at the top-left corner of the painting.

The drama of the painting is highlighted by the tug’s funnel sitting incorrectly in front of the mast, allowing the long plume of dark, sooty smoke to blow towards the Temeraire. The contrast of steam overtaking the sail brings a particular poignancy to the painting, symbolizing the relentless advance of the Industrial Revolution.

Despite this, Turner was not directly critical of the Industrial Steam Age. On the contrary, he painted modern subjects with pride and care, most notably in Rain Steam and Speed: The Great Western Railway (1844).

Where did Turner paint his most famous work of art?

The Fighting Temeraire painting shows the great ship towed by a paddle-wheel steam tug. It depicts Sheerness in Kent, with the two ships making their way along the river Thames. Their ultimate destination is Rotherhithe in South-East London.

It’s unlikely Turner witnessed this exact scene, however. He may not have even been in Great Britain at the time.

Nonetheless, Turner may have seen the ship traveling, sailing past Sheerness on other occasions. He recreated the scene from contemporary accounts and imaginative observation. Indeed, Turner included the same ship in a previous depiction of The Battle of Trafalgar, painted in 1806.

Owned by the royal navy, the Fighting Temeraire played a vital role in the Napoleonic Wars. Its crew defended Nelson at the Battle of Trafalgar in 1805 and continued serving until peace in 1815. The title of Turner’s painting directly references this wartime action.

After 1815 however, many of Britain’s large warships were redundant. Most (including the Temeraire) became supply ships, largely left to rot and decay.

Purchased in 1838 by the Rotherhithe shipbreaker John Beaston (for use as scrap), the Fighting Temeraire sold for £5,530. Beaston hired two tugs to tow the 2000-tonne ship along the Thames.

Despite this, Turner only shows one tug pulling the ship, while another is visible in the background. The journey lasted two days, with the Fighting Temeraire finally resting on 6 September 1838.

The painting itself currently hangs in the National Gallery, London. After its initial exhibition at the Royal Academy in 1839, the public loved its poetic composition and patriotic overtones.

While Turner received some very generous offers from buyers for the painting, he kept it until 1852, when he passed away. Turner referred to the painting as “My Darling,” and he gifted it in his will to the National Gallery. It remains proudly displayed in the museum alongside much other J.M.W. Turner art.