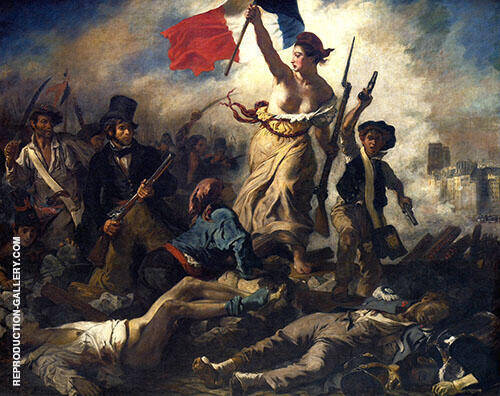 Painted in 1830, Eugene Delacroix’s Liberty Leading the People represents the July Revolution which swept across France. It’s one of art history’s most recognizable and radical images, and cemented Delacroix’s reputation as a painter of the people.

What does Eugene Delacroix’s Liberty Leading the People represent?

Otherwise known as the “three glorious days” this transformative uprising overthrew King Charles X. The revolution represented the shift from the House of Bourbon to the House of Orléans. It consequently marked the start of popular sovereignty replacing hereditary monarchical rights. Delacroix himself warmly celebrated these developments.

Among Eugene Delacroix paintings, Liberty Leading the People is unusual for its direct political and patriotic message. The famous woman in the center wears a “Phrygian cap”, symbolic of freedom for the French people. Waving the French tricolor flag, she stands for the best qualities of liberté, égalité and fraternité.

A prominent feature in the painting, the tricolor flag only became France’s national emblem after these events however. Intriguingly, a second smaller tricolor is just discernible fluttering from the towers of Notre-Dame cathedral in the background.

Is Liberty Leading the People a patriotic painting?

Liberty Leading the People is a prime example of patriotic paintings. Delacroix enhanced the partisan message through his choice of individuals in the crowd below. Comprising workers, children, students, fighters and even the upper classes, the diverse group represents the universal consequences of the French revolution.

The upper classes are identifiable through the man in a top hat, the student by a traditional bicorne and the revolutionary worker is recognizable as the young boy holding pistols. What unites all these figures though, is their fierce determination for freedom. Likely borrowed from a print by Nicolas Charlet (an illustrator Delacroix particularly admired for his energetic and realistic compositions) their exact identities are topics of enthusiastic debate.

With plenty of guns, swords and corpses scattered amongst the chaotic urban scene, it is no simple revolutionary celebration, however. The heavy price paid by the French populace is clear to see.

Speaking of the painting, Delacroix wrote to his brother describing a “modern subject” he was working on. Although he regretted not personally fighting for his country, he nonetheless said “at least I shall have painted for her”.

Is Liberty Leading the People an example of romanticism art?

Liberty Leading the People exemplifies Romanticism painting characteristics. As a movement rejecting logical details and precise drawing, it contrastingly focused on emotional responses to modern events. In Delacroix’s painting, the woman symbolizes liberty, individuality and the French republic itself. Reflecting Romantic sensibilities, she rises barefoot and bare chested from the rubble.

Many scholars accordingly identify Delacroix’s work as the end of the Age of the Enlightenment, characterized by classical styles and academic certainty. Delacroix instead harks the beginning of the new Romantic era.

Sympathetic to the ideals of the French Revolution, early Romantics saw themselves as cultural revolutionaries. They fought with their pens and paint brushes for intuition and emotion over capitalist industrialization. Indeed, other Eugene Delacroix paintings (for instance the Death of Sardanapalus) were directly inspired by the notorious Romantic poet Lord Byron.

Originally considered a dangerous and incendiary artwork, the French government removed the painting from public view. It was simply too political. Despite this, after the subsequent revolution of 1848 (which saw Louis Philippe, Duke of Orléans deposed), Delacroix’s masterpiece was returned to public display. It remains on view at the Louvre museum in Paris to this day.

The painting has subsequently inspired great works of literature such as Victor Hugo’s Les Misérables, published in 1862.