All Artists
B
BECKMANN, Max
Dream of Monte Carlo 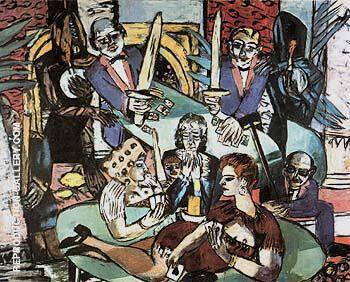 Max Beckmann was a German Expressionist artist, born in Leipzig. He was the son of a grain merchant who died when he was 10. Against the wishes of his family, Beckmann enrolled into an art school in Weimar. There began his long and distinguished career. Max Beckmann became linked with the New Objectivity Movement and was internationally renowned for his Modern paintings and the use of costumed circus figures. Beckman was famous for his triptych formats. Beckmann’s painting was interrupted by both World Wars and he was persecuted by the Nazis. His paintings were blacklisted by the Nazis in 1937 as being degenerative. He made a move to Amsterdam until 1947 when the war was over. Later that year he went to teach at the University of Washington, Saint Louis, and remained teaching in the USA until his death in New York in 1950. A prolific artist, Beckmann produced over 800 paintings between 1905 and 1950.

You can now enjoy seeing some of Max Beckmann’s famous paintings.