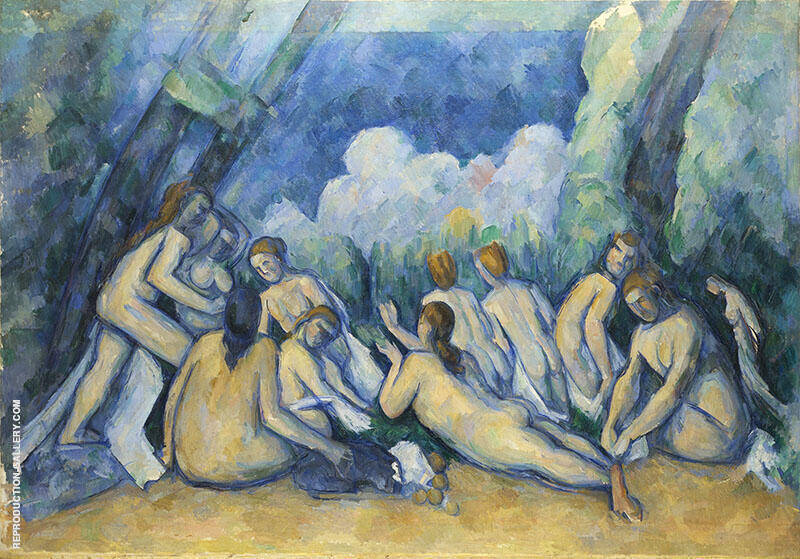 Painted in 1900, The Large Bathers is one of the last artworks of Cezanne’s astonishing creative career. Known in French as Les Grandes Baigneuses, the painting secured Cezanne’s place in the canon of French post-impressionist painters.

Despite its subsequent fame, Cezanne’s personal intentions for the artwork are uncertain.

We know he longed to produce a timeless painting however, one that stood above the vagaries of fashion and painterly techniques. As such, Cezanne discarded academic and artistic tradition, blazing his own creative trail.

What is the meaning behind Cezanne Large Bathers?

Notwithstanding Cezanne’s ambitions to create a “timeless” painting, he did draw-upon the rich history of nudes in idealized, pastoral landscapes.

Originating with Renaissance masterpieces by the likes of Titian and Botticelli, this unique genre witnessed an upheaval with painters such as Manet and Renoir. Artworks such as Manet’s Le Dejeuner sur L'Herbe particularly represent these new, modern and scandalous pastoral nudes.

Unlike these artists however, Cezanne did not seek controversy, nor did he depict mythological narratives (like those in Titian’s Diana and Actaeon and Diana and Callisto). Instead, Cezanne purely presents female figures in an unspecified, dream-like landscape.

The eleven women relax in a woodland glade beneath a beautifully blue sky. Several figures have their backs towards the viewer, creating an impression of voyeurism. It’s as if we’ve stumbled accidentally across this magical scene.

Furthermore, the strong diagonal lines of the womens’ bodies draw the viewer’s gaze towards the center of the picture and deeper into their mysterious world.

In the artwork, Cezanne flattens and compresses traditional perspective. This was a common technique amongst Paul Cezanne oil paintings. Indeed, perspective is similarly manipulated in other dream-like artworks such as Paul Cezanne Pierrot and Harlequin (1888).

What are the characteristics of The Large Bathers?

The exact characteristics of The Large Bathers is a topic of intense scholarly debate.

It possesses a strangely beautiful atmosphere due to the gentle blue tones of the landscape. Amongst Paul Cezanne Bathers, this artwork is particularly notable for the dappled use of blue tones.

This represents the shifting light of French Provence, as well as connecting the women firmly with their surroundings. Depicting each figure with a striking blue and black outline, Cezanne links the women with the trees and sky behind.

A soft haze envelops the entire scene, in which sky, water, people and plants merge into one cohesive whole. Despite this unified impression, the abstracted and fully nude female figures provide density, monumentality and tension to the artwork.

What style is The Large Bathers?

The Large Bathers is a prime example of Paul Cezanne’s post-impressionist paintings.

Championed in France between 1886 and 1905, post-impressionist painters prized symbolic content and abstracted color. They utilized vivid hues and emphasized geometric forms, with paint often applied in a thick, impasto manner.

In the post-impressionist movement, bodies distort to heighten artistic expression. Natural scenes are also represented with unusual shapes, lines and colors. Of course, all these elements are evidenced in Paul Cezanne artwork and The Large Bathers in particular.

Despite this theoretical background, Cezanne’s distortions of the womens’ bodies may also be partly due to his difficulties with figure-drawing. Cezanne confided in his artist friend Emile Bernard that he was too shy to hire “real life” nude models for his paintings. Instead, he relied on memory from trips to galleries and museums.

Whatever the reason, Cezanne’s figures are as solid and as natural as the landscape they inhabit. They form a perfect celebration of nature and our unique place within it.