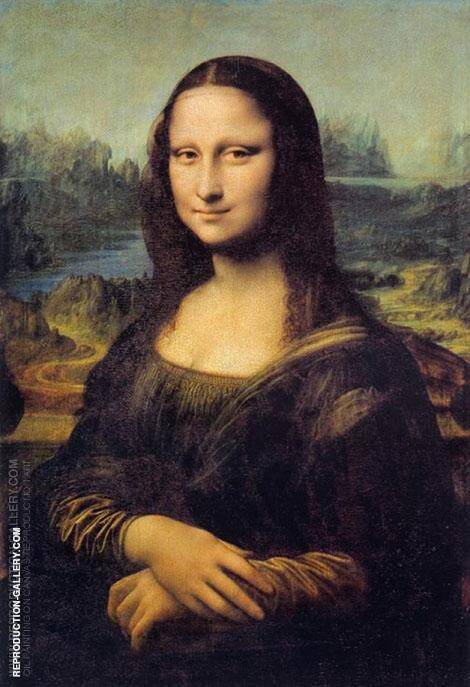 The Mona Lisa by Leonardo da Vinci is a portrait painting created in 1503.  It is one of the most famous paintings in the entire world, and an Italian Renaissance masterpiece celebrated for its beauty, skill, and enduring mystery.

Amongst Leonardo Da Vinci famous paintings, just one stands heads and shoulders above the others.

Is La Giconda a real person?

The Mona Lisa is a portrait of a real woman named Lisa Gherardini, the wife of Francesco del Giocondo, and scholars believe he commissioned Da Vinci’s painting.

We know little about Lisa Gherardini. Her family was silk merchants hailing from Tuscany and Florence. Art Historians also believe the portrait celebrated the birth of Lisa and Francesco’s second son, Andrea.

Does she actually smile?

There's one overriding mystery in any discussion of this famous Leonardo da Vinci artwork. What explains Mona Lisa’s enigmatic smile? Of course, people also ask if she even smiles at all.

Neuroscientists believe her smile shows a non-genuine expression. Indeed, her mouth raises only on one side. However, since portrait sittings took hours, the most likely explanation is slight boredom.

Nonetheless, others suggest Da Vinci had insight into Lisa Gherardini’s private life. For example, the half-smile could represent a lack of emotion towards her husband.

What is so special about the Mona Lisa's smile?

As well as fascinating debates about the meaning of the her smile, it is notable for Da Vinci’s painterly skill. The woman appears incredibly lifelike. Her facial features seem as real today as 500 years ago.

This realism is down to Da Vinci’s use of “sfumato.” An artistic technique involving soft blending and careful brushwork, it’s especially evident in the corner of Lisa Gherardini’s mouth and eyes.

Indeed, this technique creates an image closer to our “natural” world experience. It was a true artistic revolution contrasting with earlier bold medieval outlines and vivid coloring.

What are three facts about da Vinci's painting?

1. The painting could be unfinished

While the Mona Lisa dates around 1503, there’s evidence that Da Vinci made minor changes to the painting until 1517. Then, sadly, the painter partly paralyzed his right hand in 1517. This injury suggests there may be final changes still incomplete.

2. The painting hung in Napoleon’s bedroom

Da Vinci kept the picture for his entire life. On his death, he bequeathed it to an apprentice. The artwork later belonged to King Francis of France.

Staying at the Palace of Versailles until the French Revolution, Napoleon moved it to the Tuileries Palace. Here, it adorned Napoleon’s bedroom for four years.

In 1956, a Bolivian tourist threw a rock at the painting. Today, this damage is still visible near the Mona Lisa’s left elbow. In 1974 (while on tour in Tokyo), a woman sprayed red paint on the painting’s protective glass.

A Russian woman also threw a teacup at the artwork in 2009. Thankfully, the teacup hit the bullet-proof glass, causing no damage.

A handyman employed by the Louvre Gallery (in Paris, France) stole the painting in 1911. Vincenzo Peruggia believed the artwork should return to his native Italy. So he kept the painting completely undetected for two years.

Police finally caught up with Peruggia, however. He tried selling the portrait in Florence, Italy, which alerted authorities.

Where is the Mona Lisa located?

The Mona Lisa hangs in the Louvre Gallery, Paris.

Today, millions of people visit the Mona Lisa at the Louvre each year. The gallery estimates that over 10 million people annually see the most famous painting in the world.

Despite its prominent position in the popular imagination, many people express shock at the Mona Lisa’s small size. At just 77 by 53 centimeters, it is a relatively small portrait.

How much is da Vinci's most famous painting worth?

This painting is priceless. Nonetheless, in the 1960s, the Louvre insured the painting for $100 million. Worth the equivalent of $900 million today, it still holds the Guinness World Record for the highest insurance value of any artwork.

Even Mona Lisa replica paintings sell for staggering figures. For instance, one Mona Lisa reproduction (painted by a Da Vinci follower) sold for over $300,000.