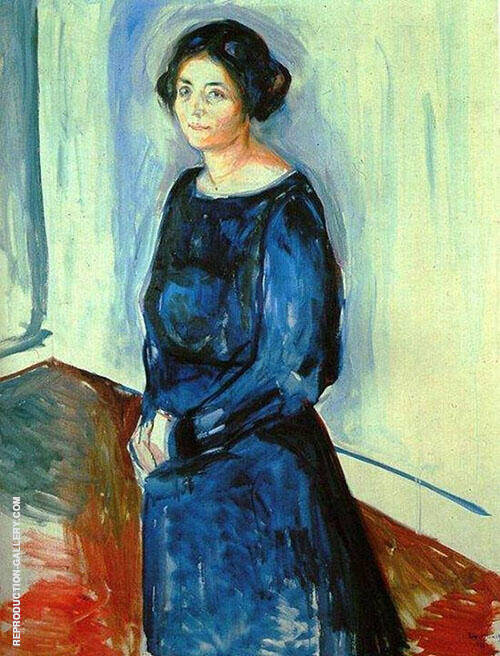 Munch was a Symbolist artist and Norwegian Expressionist painter who was strongly influenced by the German Expressionist movement which was at its height during the 1920's.

Munch's early years were blighted by family ill health and tragedy. His mother died when he just 5 years old and some 9 years later his sister died. Both had tuberculosis. Munch's father and brother also died when he was young and another sister suffered mental ill health. There can be no doubt that surrounded by death and sickness during those years had a profound effect on his art.

The Sick Child 1907 is a 4th version of the painting which can be seen at The Tate Museum in London, the original version of The Sick Child 1885, is held by the National Gallery in Oslo. Both paintings reflect on the death of his sister Sophie who died in 1877.

Death in the Sick Room is another painting held in Oslo at the National Museum. In this painting, Sophie's bed is surrounded by Munch and his immediate family, some of whom had already passed. It a painting of extreme sadness expressing the pain of grief and loss.

The Munch Love and Pain oil paintings also now known as Vampire, was completed in six different versions. The title "Vampire" is attributed to the art critic Stanislaw Przybyszewski who was a friend of Munch. Munch however, always insisted that the painting was simply no more than a man being kissed on the neck by a flame-haired woman.

The original German title of the The Scream is The Scream of Nature and in Norwegian, Shriek. The distorted and agonized face of The Scream has become of the most haunting painting in history. There are four original versions, two of which are oil paintings, both of which were stolen but later recovered.

In 2012 a pastel version on board was sold at a London Auction for approaching $120m.

The Scream oil painting is universally recognized as a cult art masterpiece and the most famous symbolist painting of Norwegian artist Edvard Munch.

Another important painting is Madonna by Edvard Munch which was initially entitled Woman Making Love, portraying the Virgin Mary. Bizarrely, the painting was originally framed and decorated with sperm cells and a fetus but it now has a more conventional appearance and is on display at the National Museum in Oslo.

Replica paintings of both the Scream and the Madonna are sought after art reproductions on canvas.

Munch's The Kiss 1897 forms part of The Frieze of Life series of paintings which were exhibited at the 1902 Berlin Secession and show the emerging love of a man and woman whose bodies meld into a single form.

The Munch oil painting, Dance of Life 1899 was also part of the Frieze of Life. This is a complex symbolic painting perhaps alluding to jealousy.

Edvard Munch landscape paintings include, Moonlight 1893 which is a beautiful landscape of a Norwegian Coastal scene with the light of the Summer evening extending to the shoreline.

The Sun 1909 by Edward Munch is a very powerful painting which was used by the University of Kristiana to celebrate its centenary anniversary.

Munch was not a trained artist but a visit to Paris during late 1889 brought him into contact with the post-impressionist artists Toulouse-Lautrec and Paul Gauguin and whilst for a period he followed the loose brushstrokes of that movement he later discovered his own style.

Munch exhibited with the Union of Berlin Artists in 1892 and his paintings attracted a certain degree of controversy due to their violent and overt sexual nature.

After a spell in Paris he finally returned to Norway where he lived a fairly reclusive existence. During 1908 Munch suffered a mental breakdown which had been exacerbated by alcohol. Munch admitted himself to a Clinic where he received therapy. When his health improved his subsequent paintings tended to display more color and generally reflect a brighter mood.

When the Germans invaded Norway his work was declared Nazi degenerate art as indeed were the paintings of Picasso, Matisse, Klee and other artists of the time.