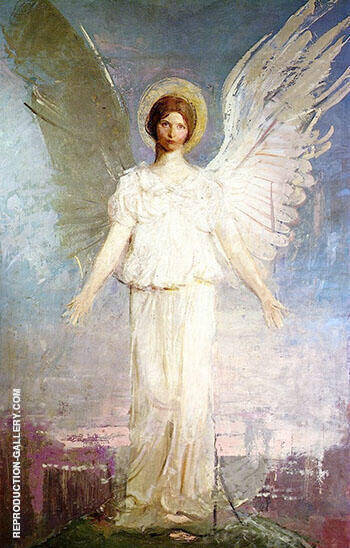 Who was Abbott H Thayer?

American painter Abbott H. Thayer was a portrait artist, landscape painter but he is perhaps better known for his famous Angel paintings.
Thayer was born in Boston, Massachusetts in 1849 and died in Dublin New Hampshire in 1921.

He came from a well-known Boston family and during the latter part of the 19th century gained considerable success in the American Art world.

He trained as an artist in New York and studied at the Academy Des Beaux Arts in Paris before returning to New York and setting up his own studio.

After the death of his first wife, Thayer settled in New Hampshire.  There he joined the colony of artists living in the Monadnock foothills.
During this period he married for the second time to Emma Beach and together they had three children.
The couple lived a simple life which rejected the fast pace of New York City life.
It was during this period of contemplation and reflection that Thayer began his ethereal angel oil paintings.

Why is Abbot H Thayer a well-known American Artist?

Thayer is also known as the father of camouflage, as he painted certain animals and birds against a counter-shaded background.
At first glance this had the visual effect of making the subject invisible to the eye.

Angels in art have always been desirable with a history going back to the Renaissance period.

Winged Figure was painted by Thayer in 1889 and is held by the Art Institute of Chicago.  This is a relatively large oil painting on canvas which measures just over 51" x 37".

Thayer's paintings, The Angel 1903 and Angel 1887 are two of our most popular reproduction oil paintings on canvas