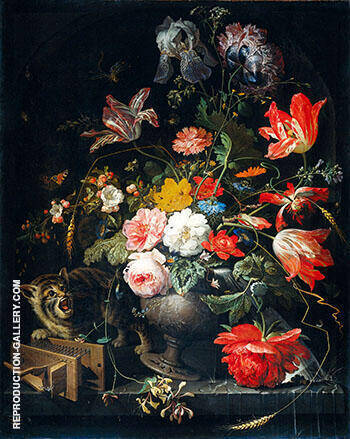 Abraham Mignon was a Still Life painter during the late 16th and early 17th centuries of the Dutch Golden Age.

The artist is famous for his ornate and abundant still life flower paintings which usually incorporate bouquets, fruit and game or fish, insects and decorative objects.

Hi parents were shopkeepers who originally hailed from the Netherlands.

The family were all members of the Calvinist Church, a Reformation doctrine which was formed during 1519.

Abraham Mignon commenced is art studies at around the age of 9, when he was apprenticed by his parents to a still life artist by the name of Jacob Marrel.

He also worked under the tutilege of Flemish Baroque painter, Jan Davdsz de Heem. The similarity in the color and composition of both artists' paintings is clearly evident.

Mignon is acknowledged for his masterly and elaborate flower oil paintings.

Flowers in a Glass Vase c1670 is one of Mignon's most famous paintings. This colorful Dutch Golden Age painting can be viewed at the Royal Picture Gallery at the Mauritshuis in The Hague.The original size of this beautiful Dutch Golden age painting is 90 x 72.5cm.

Abraham Mignon paintings often contain garlands. Garland of Flowers was painted in 1675 and is held by the Bilbao Fine Arts Museum.