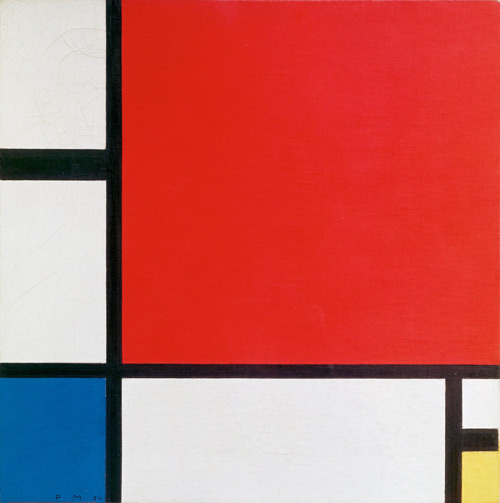 Alfred Roth donated the painting to the Kunsthaus in Zürich, Switzerland, in 1987.  Roth was an architect and a patron of the modern art movement.

A red square occupies the top right-hand corner, while a smaller bright blue square floats at the bottom left. Mondrian’s signature playfully hides at the bottom-left of the work. Amid the white and black lines, the third square of vivid yellow sits in the bottom right of the canvas. Despite their black “frames,” all the squares drift off the edge of the canvas.

Displayed in the Kunsthaus, Zurich, this oil painting on canvas is a product of the Dutch De Stijl movement (translating as “the style”). Theoretical issues were equally essential as aesthetic portrayals to De Stijl adherents, comprised of diverse artists and architects.

Mondrian collaborated with the architect and artist Theo van Doesburg to produce the De Stijl journal. Within this publication, they argued for near-total abstraction. As part of their theorizing, refining and reducing artworks to their most essential elements was vital.

In line with this, Piet Mondrian artworks avoided naturalistic representation. Instead of describing his work, Mondrian insisted that “art is higher than reality.” As such, focusing on spiritual concerns rather than physical presence was the ultimate aim.

What is a Mondrian Pattern?

Mondrian’s paintings appear incredibly controlled and carefully managed at first. However, the closer one looks, the more details emerge. Mondrian left visible brushstrokes and finished some lines just short of the edge of the canvas.

The black frames vary in thickness, with the black line above the yellow square finishing short of the others. In addition, hints of the white background (for instance, at the top-right-hand corner of the blue square) are visible, foregrounding the act of painting itself. Moreover, the oil paint has crackled over time, bringing additional texture to oil painting.

Piet Mondrian paintings all focused on the ideals of harmony and balance. The colored squares and rectangles interact in a complex manner. For instance, the large red square is prevented from dominating the canvas by the counterpoints of blue and yellow. To avoid any impression of weight or substance, the yellow square is removed from “supporting” the red plane with an interspersing gap of white.

It was only with Mondrian’s arrival in Paris (around 1911) that he put De Stijl's ideas into practice. While Mondrian admired French groups such as the Cubists, he believed their realistic approach to painting and art theory didn't go far enough. He also despised the impressionist style, which he considered overly agitated and passionate.

Mondrian’s flat planes of color were his solution to the problem of creating “harmony and unity” within the arts. This led to the famed abstraction of Piet Mondrian’s Composition with Red, Yellow and Blue. He later developed the technique with more energetic pieces such as Broadway Boogie-Woogie (1943), which reflected the interplay of traffic on New York’s grid-like streets.

Piet Mondrian artworks provide color and flair to any home or office.  Art reproductions are available in many sizes from our large online catalog. 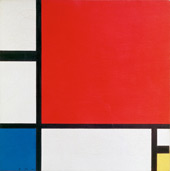