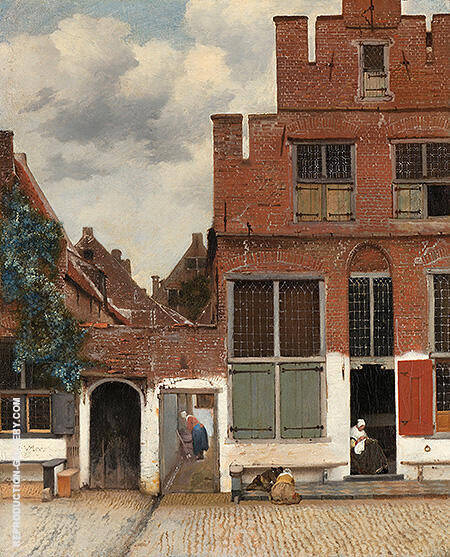 It was common in Vermeer’s time for artists to paint a tronie, which was a sample of the artist’s work as a portrait painter. With this tronie, an artist could showcase his work to prospective clients as a sample of his work, in the hope of receiving an actual commissioned painting. Tronies were not necessarily portraits of particular individuals, but usually a character study with the head and shoulders dressed in colorful clothes, such as a fancy hat or collar.

Vermeer would appear to have painted four known tronies. Girl with a Pearl Earring painting fits the description perfectly, with the use of the exotic turban headdress. Girl with the Red Hat and Girl with a Flute, both held by the National Gallery of Art in Washington, D.C. and Head of a Girl c1666, also known as Study of a Young Woman, held by the Metropolitan Museum of Art in New York, are all considered to be Vermeer tronies.

One of the stranger aspects to Vermeer’s work is the comparatively small output of paintings that he painted in his lifetime, compared to his contemporary Dutch Golden Age artists. For example, Van Goyen is known to have painted over one thousand works and both Rembrandt and Frans Hals painted hundreds of works in their lifetimes.

It is speculated that the reason for Vermeer’s relatively low output can be attributed to the level of detail in his work, the complexity of the composition, and Vermeer’s placing of objects in his paintings to capture the correct interval of space between these objects.

Thus, the vision of art that Vermeer had is clear from his paintings and he would have only been able to take the time to achieve this vision in his work if he had financial support. Most of his contemporaries had to paint in volume in order to be able to support themselves and their families. Vermeer was able to avoid this usual situation because his work attracted the interest and admiration of the social elite of Delft.

It is now known from studies of the surviving records that Vermeer’s paintings commanded relatively high prices compared to the prices that his contemporary painters could receive from their clients, and that Vermeer sold his paintings to a very small group of wealthy people who appreciated the very high quality of his work and who shared Vermeer’s vision of what Dutch Golden Age art should be. This small group of people bought from Vermeer on a regular basis, guaranteeing his income.

His main client, Pieter van Ruijven, was a very wealthy brewery owner from Delft, who was so rich that he could buy any paintings from any artist he wished without affecting his financial strength. Another client, Hendrick van Buyten was a wealthy baker who purchased four paintings from Vermeer. Clients who purchased single paintings were upper class wealthy men many of whom also purchased from other Dutch masters and amassed considerable collections. It is reported that at the time of his death, Van Ruijven was said to have twenty-one Vermeer’s in his home, more than half of Vermeer’s total output in his lifetime.

The Van Ruijven collection was inherited by his daughter, Magdalene, and passed to her husband Jacob Dissius on their marriage. On his death in 1695, the entire Dissius art collection was sold at auction in Amsterdam, in 1696, and of the alleged twenty one Vermeer’s listed in the Dissius auction documents, fifteen can be matched to paintings that are currently known, and the remaining six are either lost or unidentified.

Jan Vermeer is one of the most famous artists, and is a recognized master of 17th century Dutch genre painting who frequently used expensive pigment in his work, such as Lapis Lazuli and Ultramarine.

Vermeer’s oil painting on canvas, Girl with a Pearl Earring c1655 is held in the Mauritshuis Museum in The Hague in Holland, but the painting has been exhibited all over the world. It has also been the subject of a best-selling book and the Girl with Pearl Earring film released in 2003.

Vermeer Dutch Golden Age paintings include The Milkmaid 1658, also known as The Kitchen Maid, The Music Lesson, also known as Lady at the Virginals with a Gentleman, which forms part of the British Royal Family’s Collection.

Famous painting reproductions of Johannes Vermeer are for sale online. Museum quality replica paintings are available in many size options. A specialist craquelure paint finish can be added to your painting to give it an aged and authentic feel.