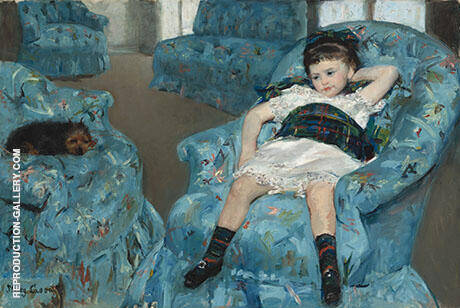 Mary Cassatt Little Girl in a Blue Armchair (1878) is a masterpiece of Impressionist oil painting.

Known in French as Petite Fille Dans un Fauteuil Bleu, it is one of Mary Cassatt’s most famous paintings. Working alongside Edgar Degas, Cassatt made several alterations and additions to the artwork over a few weeks.

The painting appeared at her debut show (part of the Fourth Impressionist Exhibition) in 1879, where it initially divided critical opinion.

Did Mary Cassatt have a child?

The American artist Mary Cassatt never married or had children of her own. Despite this, she created an astounding oeuvre of work depicting domestic mother and child scenes. Impressionist paintings include Mother and Child (1890), Maternal Caress (1896), and Little Ann Sucking Her Finger (1897).

The child in Little Girl in a Blue Armchair was Degas’ daughter. Writing in 1903, Mary Cassatt described how she’d painted the portrait and “he [Degas] found it good… advised me on the background and even worked on it.”

On its submission to the American Pavilion (for the 1878 World’s Fair), the painting provoked critical appropriation. The blunt refusal infuriated Mary Cassatt, complaining that the jury had no artistic sensibilities whatsoever.

Described by Griselda Pollock as one of the most “radical images of childhood” of all time, the painting has subsequently become an icon of modern art.

Interestingly, the dog in the painting is a Brussels Griffon, which Cassatt may have encountered during her travels in Antwerp in 1873. Indeed, Degas later presented Cassatt with a puppy, Brussels Griffon. After this point, Cassatt kept this breed for the rest of her life.

It’s likely Degas helped paint the floor between the chairs and the light streaming through the French windows.

Cassatt took the loose and expressive style of painters such as Degas and Edouard Manet and transformed it into her own carefully considered creations. Instead of traditional allegorical works, Cassatt primarily focused on female and domestic scenes.

Mary Cassatt's art employs a limited color palette combined with bold, vibrant brushstrokes. The painting creates a dynamic sense of interplay, perfectly representing a moment caught between rest and play. Indeed, the little girl flops on the chair (in a moment of tiredness or boredom) while the little dog appears similarly worn out.

A light shines through the French doors at the back of the room, brightening the otherwise relatively dark scene. Cassatt picks out the fine details on the child’s lace dress and the intricately patterned armchairs.

Where is Little Girl in a Blue Armchair?

Purchased in 1903 by the artist Ambroise Vollard, the painting remained in Paris for many years. Finally, in 1963 Paul Mellon, the American philanthropist and art collector, purchased the painting.

Oil painting reproductions by famous American Impressionist artist Mary Cassatt are created in our Studio by one of our resident professional artists.

Little Girl in a Blue Armchair 1878
By Mary Cassatt