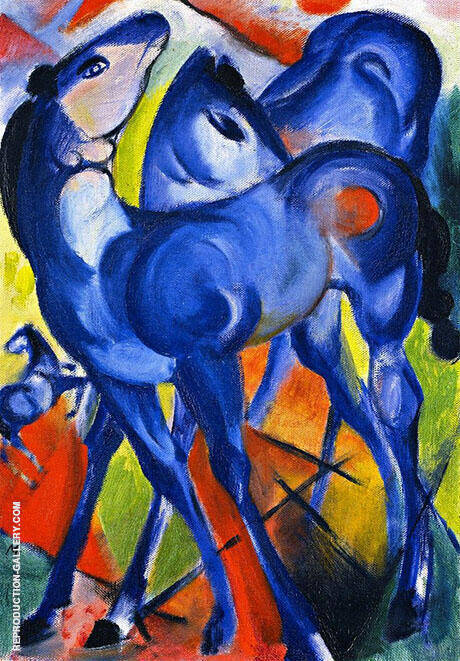 Franz Marc was born in Munich, in 1880, at that time in the Kingdom of Bavaria, but now the capital of Germany.

His father Wilhelm was a landscape painter and the young Franz Marc was encouraged to take up painting by his father and then encouraged to become a professional painter. Initially, Marc had wanted to study theology like his brother, Paul.  However, Marc entered an arts program at Munich University in 1899, but had to complete a year of military service first.

In 1900 Marc began his studies at the Academy of Fine Arts in Munich. In 1903 and then in 1907 Marc went to France, and stayed most of the time in Paris where he studied in museums and copied many of the paintings he saw, a very traditional method for a young aspiring artist to develop his own style.

During his first visit to Paris in 1903, Marc spent six months studying Modern and Impressionist paintings where he met the French painter Jean Niestle, who was famous for his animal paintings.  This meeting clearly influenced the young Franz Marc, whose most famous paintings are of animals.

Marc’s earliest paintings were also of animals, as early as 1905, and on his return to Paris in 1907, Marc spent time studying the works of Vincent van Gogh. He mixed with other artists and met also the actress Sarah Bernhardt.

In the following year Marc experimented with Impressionism and Pointillism, but found that these styles did not help him to achieve what he wanted in his own work. He wanted a strong use of color and so turned to the vivid use of color by the Fauve artists, and was able to use these strong colors to depict the connection between man and nature.

On his return to Munich, Marc spend a considerable period studying the anatomy of animals and when living in Berlin, visited the Berlin Zoo on numerous occasions to study and sketch the animals he saw from as many different angles as he could. Indeed, as his style progressed, animals overtook human form in his subject matter and for Marc; animals represented the ideal subject matter to show truth, beauty and purity.

In 1910 Marc made an important friendship with the painter August Macke, and painted Nude with a Cat, and Grazing Horses, both for the New Artists Association, and displayed at the Thannhauser Galleries in Munich.

His friendship with Macke produced a color theory of his own that used blue as the male principle, yellow as the female principle, being gentle, happy and sensual, and red as heavy and brutal, which by its use could be opposed to and overcome the other colors.

A pivotal moment in Marc’s life came in 1911, when he founded a magazine, Der Blaue Reiter, the Blue Rider, which became an art movement, a main branch of the German Expressionist Movement,  formed with  August Macke and the Russian artist Wassily Kandinsky, recognized as the pioneer of Abstract Art. Marc also met the Cubist and later the Futurist painter Robert Delaunay, who was very influential in Marc’s work, painting The Tiger and Red Deer in 1912, and The Tower of Blue Horses, Foxes, and Fate of the Animals in 1913.

After these paintings and with a war imminent, marc moved towards complete abstraction, painting Cheerful Forms, Playing Forms, Forms in Combat, and finally Broken Forms.

When the First World War broke out in 1914, Franz Marc was drafted into the Imperial German Army, as a cavalryman, but by 1916 his abilities as an artist were used by his commanders who moved him to work in military camouflage, hiding guns and artillery in general under large canvas sheets that were painted by Marc in a Pointillist style, hiding the guns from aircraft surveillance. He painted nine of these canvas sheets, in styles that he called “from Manet to Kandinsky”, and was very proud of his achievements.

In 1916 the German government decided that famous artists like Franz Marc should be removed from military service on the front lines and although an order had been issued to get Marc away from the combat zone he was in, the order arrived too late and Marc was killed by a mortar round at the battle of Verdun.

Franz Marc’s legacy as an artist and leading figure in German Expressionism, was to redefine the nature of art to a more abstract and spiritual level, viewing the world through the eyes of animals. His move from representational forms to pure abstraction led the way forward for future generations of painters and his use of bright colors to achieve emotions and a sense of spiritualism have influenced artists such as Jackson Pollock and Willem de Kooning, as well as the color field artists, notably Mark Rothko.

After the National Socialists took over the Government of Germany, later becoming the Nazi party, modern art was suppressed and from 1936 and 1937, many artists, including Franz Marc were condemned as degenerative artists and their painting removed from museums. Marc had some 130 works removed, and his painting Blue Horses was sold to the Musee des Beaux Arts in Liege, France, while Landscape with Horses was found in 2012, along with over one thousand other paintings, in the Munich apartment of Cornelius Gurlitt, whose father Hildebrand was one of Hitler’s four official art dealers.

More recently in 2017, the family of Kurt Grawi demanded the restitution of Marc’s painting The Foxes, which had found its way to the Kunstpalast Museum in Dusseldorf after being confiscated from Grawi who had owned the painting before the Nazis came to power. The German Advisory Commission ruled in 2021 that the painting should be returned to the Grawi family.

The Franz Marc Museum in Bavaria is dedicated to the works of Marc and holds some 150 of his paintings and works by his contemporaries including Paul Klee, Wassily Kandinsky, Max Beckmann, Gabriele Munter and Alexej von Jawlensky.

Franz Marc’s most expensive painting sold at auction was in London in 2008 at Sotheby’s when $24 million was paid by a private Russian buyer for Weidende Pferde 111, Grazing Horses 111. This was a record price achieved by any artist in 2008 for a Modern or Impressionist work, and is the only example of Marc’s horse paintings remaining in private hands.