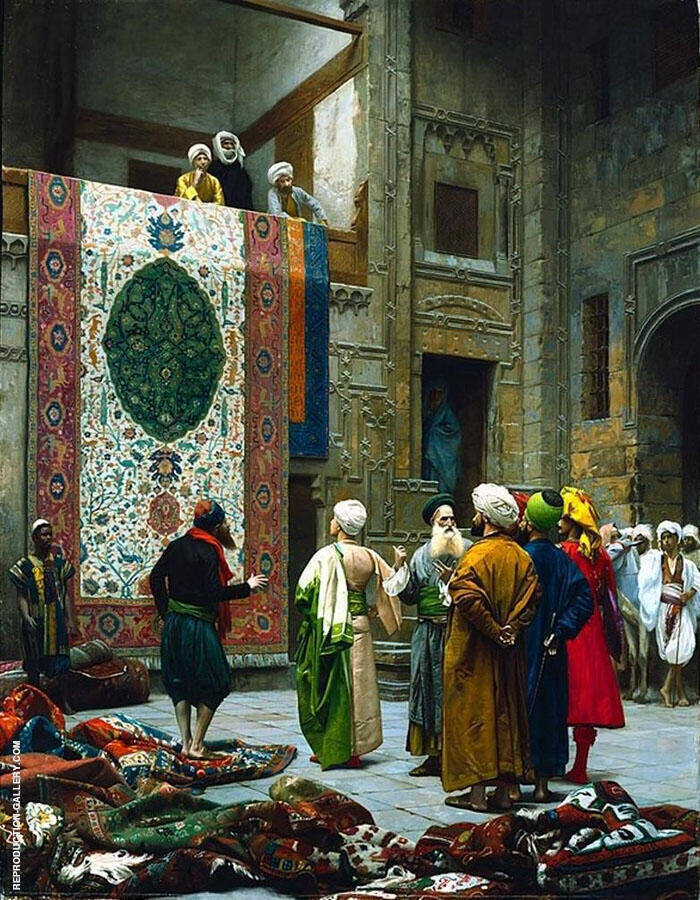 Jean Leon Gerome, The Carpet Merchant, is an outstanding creation of French academic painting.
Painted in 1887, this oil on canvas painting exhibits a strong element of orientalism and French colonialism.

Jean Leon Gerome's paintings include depictions of historical and mythological subjects. His oil paintings reflect his travels in North Africa and the Middle East.

What does The Carpet Merchant painting represent?

In the 1850s, Gerome visited Egypt for the first time. Reflecting the classical "Grand Tour" route, he traveled up the Nile towards Cairo before going to Jerusalem and Damascus.

This visit shaped his entire artistic creation after this date. Indeed, the trip heralded the start of Gerome's orientalist phase. As a result, many of his paintings depict Arab religious practices and North African landscapes.

Consequently, The Carpet Merchant represents an "everyday" scene brought to life via the nineteenth-century French imagination.

Gerome's oriental artworks often mix contemporary stereotyping of the near East and combine carefully observed representations of female nudity.
Some of this period's most famous Jean Leon Gerome art include The Slave Market, Moorish Bath, and The Black Poet.

While these oil paintings were largely imaginative, they also contained expertly crafted examples of Middle Eastern architecture and idealized academic paintings of nudes.

Fascinated by this part of the world, Gerome also collected artifacts and costumes for staging oriental scenes in his studio. Unfortunately, this makes accurately locating the creation of The Carpet Merchant problematic. The painting could have been painted "en plein air" in Cairo or perhaps in Gerome's Paris atelier.

In 1878 Gerome described how, when exhausted from "long marches under the bright sun," he painted enthusiastically on location.
He preferred to add just "three touches of color" to paintings of his most vivid memories, sometimes omitting crucial details.

Where is the Carpet Market in Gerome's painting?

The Carpet Merchant painting depicts a scene in Egypt. It reflects a common occurrence of nineteenth-century Egyptian life; the display and bartering over stunning hand-made carpets.

Carpets are some of the oldest luxury items purchased as domestic furnishings. They appear in some of the most famous examples of medieval and renaissance art, for instance, Hans Holbein's The Ambassadors (1533) and Hans Memling's Virgin with Child (1490).

The carpet market visited by Gerome lay in the capital of Cairo. Visiting the site in 1885, the artist adored the markets with their luxurious fabrics, bright colors, and distinctive sounds. While the painting depicts several figures, the carpets are the main focal point.

Indeed, draping large rugs from balconies and walls enabled quick viewing for buyers. The crowd of men possibly debate the merits of the giant carpet towards the left of the composition. The shine of their robes and turbans almost rivals the rugs and carpets in beauty as they all listen intently to the charismatic merchant.

To the right, another group of men (more modestly dressed) look on. The woman appearing from a doorway in the background is the only female in the composition.

Akin to other Gerome artworks, the architectural patterns of the building appear in intricate detail and vivid color.

While Jean Leon Gerome's name is not that well-known today, he was one of the most famous painters of the nineteenth century. By the end of the 1880s, Gerome's pioneering artwork made him the world's "most famous living artist".

In addition to the astounding skill of his paintings, Gerome also taught art and ensured the ongoing popularity of the French academic and classical styles. Already renowned as a leading teacher, The Carpet Merchant emerged while Jean Leon Gerome worked as a Professor at the prestigious Paris École des Beaux-Art.

Jean Leon Gerome represents a unique historical period with oil paintings such as The Carpet Merchant and The Slave Market. While his paintings reflect entrenched French attitudes towards non-white subjects, they also present unparalleled painterly skill and beauty.