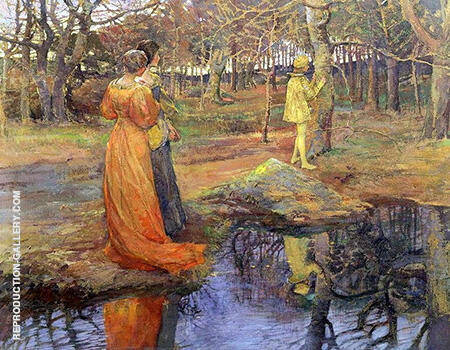 Elizabeth Forbes was a 20th century Canadian artist who spent most of her life in the UK, and set up the Newlyn School with her husband Stanhope Forbes, at Newlyn in Cornwall. Forbes was good friends with Walter Sickert and James Abbott McNeill Whistler, who both influenced her style. Forbes was born in Ontario but went to live in Chelsea, London with her uncle when her father died, and attended the South Kensington Art School, now known as the Royal College of Art. They lived next to Dante Gabriel Rossetti, but never met. Elizabeth Forbes painting mainly studies children, often her own, painted in the French realist style. She was well liked and her work was often more highly thought of than other members of the Newlyn School.

She died in Cornwall aged only 52.

Blackberry Gathering 1916 by Elizabeth Forbes was painted in 1916 and is a typical example of her paintings depicting outdoor life.

Are you interested in the Newlyn School of Art and particularly the paintings of Elizabeth Stanhope-Forbes and her husband Stanhope-Forbes? A lovely collection of paintings by both artists is available to buy as reproduction oil paintings.