All Artists
A
AIVAZOVSKY, Ivan
The Ninth Wave 1850 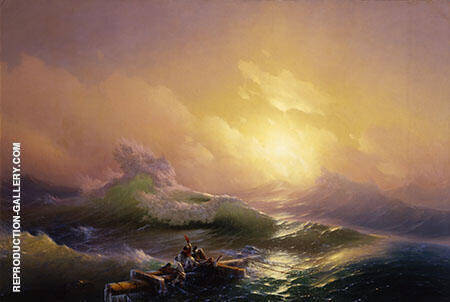 Ivan Aivazovsky, The Ninth Wave, is one of the most famous seascape paintings.

This large seascape painting was completed in 1850 and measures over three meters by two meters, illustrating Aivazovsky's true mastery.

What does The Ninth Wave painting represent?

As the title suggests, the painting represents the “ninth wave”. In popular mythology, the ninth wave in a series of waves is always the most significant and destructive surge.

Artistically, this relates to the forces of evil and darkness threatening humanity. Aivazovsky’s waves are genuinely menacing, with no safe and solid land in sight.

There is a small glimmer of hope, however. The darkness of Aivazovsky’s turbulent sea is interrupted by a warm light. A small group of people clinging to a ship’s mast is visible in the foreground. With dawn breaking, rescue and redemption might be just around the corner.

The composition and color palette of the painting is also highly optimistic, with the beautiful yellow and red sunrise heralding the end of the dramatic storm.

The painting thus represents humanity’s unconquerable will to survive and the Christian message of hope and salvation. Indeed, the debris forms the shape of a cross, furthering the Christian metaphor and atonement with God.

The detail in the painting is also simply astounding. The sea’s shining surface drops of water and cresting waves are masterly created with precision.

During his lifetime, Aivazovsky painted over 6,000 seascape paintings. Inspired by his upbringing in the harbor town of Feodosia in Crimea, Aivazovsky studied Fine Art in Saint Petersburg.

He remained fascinated by the sea throughout his lengthy career and was the principal painter of the Russian Navy. Aivazovsky's time in the Navy has resulted in hundreds of naval-themed works, including The Battle in the Chios Channel (1848) and the later Brig Mercury Attacked by Two Turkish Ships (1892).

Aivazovsky experienced many coastal storms firsthand and was aboard one ship that almost sank off the Black Sea coast. Given the unpredictable Russian climate, it’s no surprise that many Ivan Aivazovsky paintings depict storms and shipwrecks.

The irresistible power of nature places human endeavors in stark contrast, each of us approaching our battle with an approaching “ninth wave.”

Aivazovsky loved the Black Sea coast so much that he returned to his hometown of Feodosia later in life. He built a small studio close to the sea and continued producing maritime art.

The Ninth Wave painting currently hangs in the State Russian Museum, Saint Petersburg, alongside an extensive collection of other Ivan Aivazovsky paintings. As the world’s most comprehensive collection of Russian fine art, the State Museum is also one of the world's biggest and most prestigious art galleries.

Where is Aivazaovsky's original seascape painting?

State Russian Museum has owned The Ninth Wave oil painting since 1897. Originally acquired for the Imperial Hermitage of Emperor Alexander III, it has never been re-sold.

Despite this, Ivan Konstantinovich Aivazovsky remains one of the most desirable and sought-after Russian romantic painters. His paintings often sell far more than $3 million at public auctions.

The Ninth Wave painting is “the most beautiful painting in Russia.”

Other notable Aivazovsky paintings of seascapes include Rainbow (1873) and Disaster (1898). Both artworks similarly represent small human figures pitched against the sea's might.

The Ninth Wave 1850
By Ivan Aivazovsky