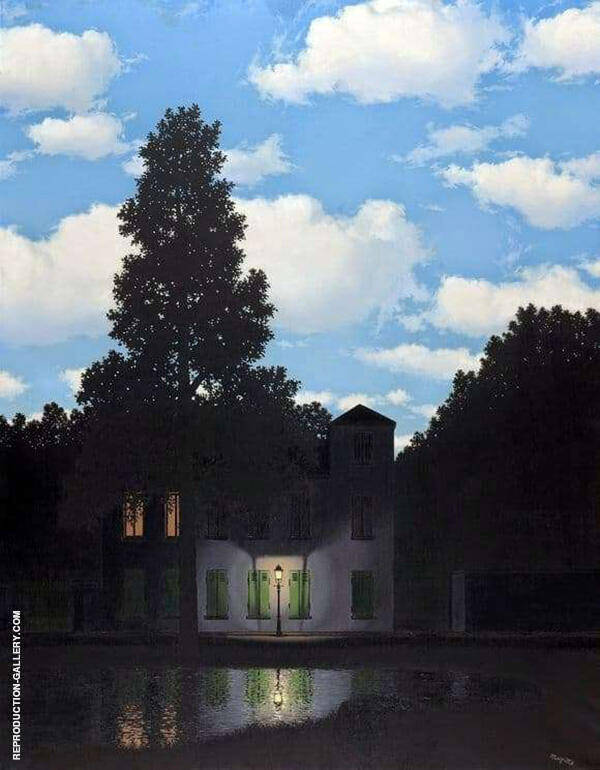 Magritte Empire of Light (known in French as L'Empire des Lumières) forms part of a series of paintings by Belgian painter René Magritte. Consisting of twenty-seven images, they depict a nocturnal domestic landscape set against a bright blue sunlit sky.

When was Empire of Light painted?

The Empire of Light paintings were created between 1939 and 1967 and are true surrealist masterpieces.  The paintings are not a formal "series" and consist of seventeen oil paintings on canvas and ten gouache compositions on paper.

In a 1956 interview, Magritte described the painting as “a nighttime landscape and a sky such as we see during the day”. He further elaborated on the poetic power of art and his interest in night and day.

What does René Magritte’s Empire of Light symbolize?

It’s unclear precisely what René Magritte’s Empire of Light symbolizes. Despite this, there are many theories. However, we know it depicts the simultaneous experience of night and day, light and dark. This aspect of unexpected juxtaposition was characteristic of surrealism as a philosophical and artistic movement.

Symbolism (and René Magritte's artwork) explored the unnerving and illogical sides of our conscious and unconscious minds. The movement aimed to resolve the apparent contradictions of dream and reality into a greater truth – or surreality.

The Dada artist Max Ernst (particularly his surrealist frottage paintings such as Forest and Sun) is another possible inspiration. Salvador Dali’s Shades of Night Descending (1931) also forms another interesting parallel.

Created after the famous René Magritte Son of Man painting (1946), Empire of Light continued the artist's central preconceptions. Speaking of the artwork, he described the way everything we view “hides another thing.” He told the internal sense of conflict “between the visible that is hidden and the visible that is present”.

Comparably, Empire of Light also foregrounds contradiction. It pits the dark, nocturnal street scene against the pastel blue sky with fluffy cumulus clouds. Sunlight and clarity fight with their opposites of darkness, unease, and confusion.

The paradoxical nature of the painting creates an unsettling atmosphere. It makes the still darkness at the bottom of the canvas even more troubling than usual.

Where is the original painting?

Magritte produced multiple versions of the Empire of Light theme o meet the increased demand for his art. He continued exploring the theme of night and day for the rest of his artistic career.

Rene Magritte Empire of Light paintings is displayed in museums all over the world, including the Museum of Modern Art (New York City), the Peggy Guggenheim Collection (Venice), and the Royal Museum of Fine Arts (located in Belgium).