All Artists
R
ROSSETTI, Dante Gabriel
Bocca Baciata (Lips That Have Been Kissed) 1859 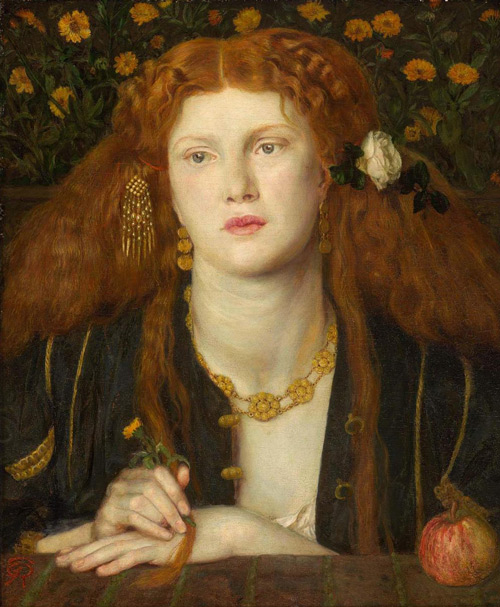 Painted in 1859, Bocca Baciata is one of the most famous Dante Gabriel Rossetti paintings.

The painting represents a turning point in Dante Rossetti art. As the first of several portraits depicting single seated female sitters, it marked the beginning of Rossetti's unique signature style.

Moving away from Rossetti’s earlier style (highly influenced by Medieval artwork and culture) the painting is more Venetian in its sensibilities. The careful handling of paint, opulent color palette and luxurious treatment of the woman’s red-golden hair create a truly sensual and captivating image.

Who is the woman in Bocca Baciata?

The model in Rossetti's portrait is Fanny Cornforth, a professional artistic model hailing from Sussex, England. She gazes out of the pictorial frame, perhaps at Rossetti or a mirror reflecting her beauty.

For Rossetti, Fanny Cornforth (born Sarah Cox) represented the platonic ideal of beauty. Her skin is pale white and almost translucent, whilst her rounded red lips hint at the artist’s own longing.

The addition of various opulent decorative touches (such as luxurious fabrics, flowers and jewelry) only adds to his visual and visceral enjoyment. It invites the viewer to enjoy Cornforth and the painting as a whole in equal measure.

Despite this romantic background, Cornforth performed the more mundane role of housekeeper for Rossetti. She adopted this role after the death of his wife Elizabeth Siddal.

Nonetheless, Rossetti’s depictions of Cornforth are notably more voluptuous and carnal than his paintings of other lovers and muses such as Jane Morris and Elizabeth Siddal.

Rossetti's brother (William Michael Rossetti) praised Cornforth’s beauty. At the same time however, her lower-class upbringing (as the daughter of a blacksmith) shocked Rossetti’s contemporaries. His brother further commented she had absolutely no “charm of breeding, education or intellect”. Many of Rossetti’s friends and family held similar opinions and pressured the artist to cease the relationship.

In depicting this idealized beauty and sensuality, Rossetti utilized sixteenth century Venetian masterpieces as inspiration, especially the work of Titian.

As Rosetti’s mistress and model, Cornforth inspired some of his most sensual artworks. As well as his artistic muse and general housekeeper, she also became an artistic collaborator on many Dante Gabriel Rossetti paintings during the 1860s.

In a letter written to the Scottish artist William Bell Scott, Rossetti described trying to master the art of painting skin. He identified a self-perceived fault (that of stippled brushwork in flesh), aiming instead for a fuller and rounder representation in Bocca Baciata.

Rossetti even accused the “old good painters” of a similar flaw. Whilst their artworks were “masterpieces for color and execution”, Rossetti felt the flesh-tones lacked reality. Inspired by this challenge, he redoubled efforts in Bocca Baciata with stunning results.

What does Bocca Baciata mean?

The painting’s title translates from Italian as “mouth that has been kissed”.

This saying came from an Italian proverb, inscribed by Rosetti (in Italian) on the back of the artwork. Roughly translated, this reads “the mouth that has been kissed doesn’t lose its fortune: it renews itself like the moon.”

It’s likely he came across the proverb in Boccaccio’s Decameron. In this 14th century collection of short stories, the tale of Alatiel is recounted. Alatiel was a beautiful Saracen princess. Despite previous sexual relations (reportedly on ten thousand occasions with eight different lovers in the space of four years), the King of the Algarve selected her as his virgin bride.

Consequently, although the painting marks a significant shift in Rossetti’s artistic style, it maintains his close literary interest and connections.

Whilst the painting is an accomplished direct portrait in its own right, there are also multiple layers of allusion. Cornforth is depicted right at the front of the pictorial plane, close enough to reach out of the canvas. Despite this, her physical proximity contrasts with the psychological distance.

Cornforth gazes out of the picture, but she doesn’t look directly at us. Possibly hinting at separation or strife within the relationship, it’s a fascinating detail. On the other hand, Cornforth might be looking at the artist as opposed to the viewer. This could suggest his perceived ownership and their closeness as a pair.

With seven members in total, the artists, critics and writers prized abundant detailing in art. The painters (exemplified by Rossetti) favored intense and deep colors and the complex compositions found in early Italian renaissance art.

Possibly influenced by an earlier work by John Everett Millais (his Portrait of Sophie Gray), Rossetti’s Bocca Baciata is steeped in Pre-Raphaelite iconography. The inclusion of the apple in the bottom-left corner is particularly intriguing. This could reference Biblical original sin (depicted in the Book of Genesis), hinting at the pair’s tempestuous and often adulterous love affair.

Why was Bocca Baciata painted?

Commissioned by George Price Boyce on 23 July 1859, Rossetti’s exact reasons for painting the portrait are shrouded in mystery. Completed on 13 October though, it was painted relatively quickly.

Boyce was also a founding member of the Pre-Raphaelite brotherhood. As a close friend and frequent patron of Rossetti, Boyce happily lent the portrait to the Royal Academy in 1883 to further Rossetti’s name and publicity. Appearing in an Exhibition of Old Masters, the painting was a critical success.

Lawrence donated the portrait in his will to the Museum of Fine Arts, Boston, USA. The painting remains proudly displayed in their fine art collection to this day.

Gabriel Charles Dante Rossetti was born in London on May 12th 1828.

Who were the Rossetti family?

Rossetti initially studied at home, but later attended King’s College School on the Strand. It was here that he found a love of literature. The young man consequently spent much of his time reading the Bible, Shakespeare, Dickens and Lord Byron (to name a few!).

Dante Gabriel Rossetti longed to be a poet and an artist from a young age. He therefore enrolled at the Henry Sass Drawing Academy (1841-1845) and later studied at the Antique School of the Royal Academy of Arts (until 18480) before leaving to learn from the painter Ford Madox Brown. The two men developed a close, life-long friendship.

William Holman Hunt later joined their circle, after Rossetti noticed his painting The Eve of St Agnes. It was Rossetti, John Everett Millais and Holman Hunt who developed the philosophy of the Pre-Raphaelite brotherhood.

What was Dante Gabriel Rossetti famous for?

Dante Gabriel Rossetti is primarily famed as a member of the Pre-Raphaelite brotherhood. Founded in 1848 by seven men, this artistic grouping pointedly referred to themselves as a “brotherhood”.

Inspired by the Nazarene movement, the artists and writers in the circle (including Rossetti) rejected any mechanistic approaches to art. They lived in a spiritual, Christian manner and implemented early Italian renaissance ideals of painting.

This included abundant detailing, complex compositions and intense jewel-like colors. They believed the classicism and neoclassicism of artists such as Raphael (and later English artists such as Joshua Reynolds) had corrupted academic art. Hence the name “Pre-Raphaelite”.

The group was particularly aligned with the critic John Ruskin, who was strongly religious. Christian and literary themes are therefore common-place in Dante Gabriel Rossetti works. He was also fascinated by medieval poetry and translations – especially that of Dante (his namesake).

The Pre-Raphaelite brotherhood met with strong critical opposition at first, which led Rossetti to shy away from large exhibitions. Instead, he sold many watercolors and smaller oil paintings privately. Even after later critical acclaim by writers such as John Ruskin, Rossetti continued avoiding exhibitions for the rest of his life.

After her early death however, Rossetti often depicted the (very similar in appearance) Alexa Wilding. She worked as a full-time model for Rossetti from 1865 onwards, painted in works such as The Loving Cup (1867), Venus Verticordia (1868) and The Women’s Window (1879).

She also appeared in a later 1880 work The Day Dream featuring Jane sitting in the bough of a sycamore tree. A masterpiece of Pre-Raphaelite paintings, it depicts Jane holding a stem of a honeysuckle plant, a token of love in the Victorian era.

This could have referred to the secret and long-lasting affair between Rossetti and Morris. They often summered at Kelmscott Manor in Lechlade, whilst her husband was away on travels.

Dante Gabriel Rossetti paintings were often inspired by his love of medieval lore and literature, seen in works such as The Holy Grail and the Salutation of Beatrice.

Despite this, from the 1860s onwards, he painted more close-up portraits of his lovers such as Jane Morris and Fanny Cornforth. Fanny Cornforth became the epitome of eroticism and symbolic stylism in works such as Bocca Baciata (Lips That Have Been Kissed).

Inspired by Christianity and moral reform, Rossetti wrote many of his own literary works. This includes texts such as Hand and Soul (1849) which depicts a young artist attempting to serve God and The Blessed Damozel (written between 1847 and 1870) with biblical imagery throughout.

In 1862, tragedy hit when Rossetti’s wife (Elizabeth Siddal) died. She took an overdose of Laudanum, most likely suicide, after suffering a miscarriage. Rossetti became increasingly depressed and many of his unpublished poems were buried with her at Highgate Cemetery.

Soon after Siddal’s death, Rossetti moved to Cheyne Walk in Chelsea, where he lived for the next twenty years. He kept his lover Fanny Cornforth in her own Chelsea rooms nearby.

Dante Gabriel Rossetti poems (especially My Sister’s Sleep and the House of Life sonnets, two of his most famous literary creations) were characterized by a complex interplay between thought and feeling.

His art and poetry were always inextricably interlinked.

Rossetti often created artworks to illustrate poems (for instance with Tennyson’s poetry and his sister’s Goblin Market). He similarly wrote sonnets to accompany his pictures such as Astarte Syriaca (1877).

At the behest of friends, Rossetti exhumed his poems from his wife’s grave. He published them as a collection in 1870. To Rossetti’s dismay however, they faced critical disapproval. Their sensuality, eroticism and spirituality particularly offended Victorian sensibilities.

How did Dante Gabriel Rossetti die?

Rossetti experienced a mental breakdown in 1872 as a direct result of this criticism. He also abruptly left his residence with Jane Morris (Kelmscott Manor) in 1874.

Rossetti published a second collection of poems in 1881, which contained his House of Life sonnets. Despite this, he sank into a deep depression later in life and struggled with increasing drug addiction and alcohol abuse.

Rossetti spent his last years as a near complete recluse. He died on 9 April 1882 as the result of a kidney disease, having also suffered from alcohol related psychosis