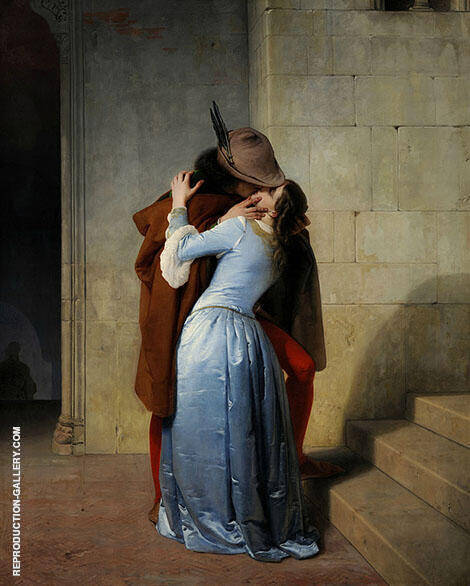 Francesco Hayez, The Kiss 1859 is one of the most famous romantic paintings of all time.

This oil on canvas painting ensured the status of Francesco Hayez as a Romantic Italian Painter, representing the patriotic spirit of the nineteenth-century Risorgimento.

Why did Francesco Hayez paint The Kiss?

The Kiss by Francesco Hayez depicts freedom and patriotic love as much as romantic emotions. It’s consequently become an icon of Italian painting, representing national pride and unity.

The Risorgimento (the Unification of Italy) occurred during the nineteenth century.

Following Napoleonic France's defeat In 1815, the Congress of Vienna redrew the map of Europe. Italy was due to return to the pre-war patchwork of independent princely states.

Despite this, a popular current of Republicanism and growing national pride was steadily rising. The Austrian Empire and Habsburgs aggressively repressed Italian nationalist activity. The other European powers highly controlled small independent states.

Consequently, Il Bacio represents a young patriotic Italian soldier kissing his love goodbye. He’s about to leave (with one foot already resting on the step), ready to fight for his country against foreign tyranny. The tight embrace further emphasizes the imminent farewell.

Despite the hopeful, patriotic nature of the painting, there are hints that danger lurks. A shadowy figure is just visible in the left-hand corner, representing the conspiracy and danger rife in Italy at this time.

Why is this famous oil painting important?

Amongst Francesco Hayez's artworks, The Kiss is significant for its historical background. Although commissioned initially by Alfonso Maria Visconti di Saliceto (a well-known Milanese patriot), Hayez painted another four versions.

Hayez escaped any form of censorship due to the allegorical nature of his paintings. Indeed, Francesco Hayez explored the theme of passionate embraces in earlier kiss paintings.

Other allegorical works include Ultimo Bacio di Giulietta e Romeo (1823), which presents the two lovers Romeo and Juliet. Romeo passionately pulls Juliet closer to him in this artwork, with one hand on her lower back. It caused a scandal at its initial exhibition but cemented Hayez’s leading reputation.

Since its creation, The Kiss has massively influenced Italian artists, writers, and musicians. As a representation of truth, beauty, and hope, it’s appeared on posters, advertising, and even in other paintings. Indeed, it appears in the background of Gerolamo Induno’s Sadness (1862) and even featured on mass-produced chocolates during the 1920s.

Inspired by the courtly love and bravery of the Middle Ages, Hayez aimed to bring this theme into the modern day. Although the painting is highly political, the ultimate focus is on the kiss.

The couple is not recognizable, with their pure act of love at the center of the composition. However, the lines of the diagonal steps work to draw the viewer’s eye toward the lovers’ heads.

The sumptuous and vivid fabrics depicted in The Kiss demonstrate the importance of Hayez’s early training in Venice. In addition, the treatment of the woman’s silk dress is highly reminiscent of Titian’s Portrait of a Man with a Quilted Sleeve (1509) and the Venetian celebration of “colorito” as the dominant compositional element.

The resemblance applied not just to the colors themselves but also focused on the careful handling of paint to create the naturalistic effects of light and texture evident in Il Bacio.

The blue of the woman’s dress and the man’s red hat also pay tribute to the French tricolore. Before Hayez painted the work, France allied with Italy against the Austrian and Habsburg Empires.

The Kiss 1859
By Francesco Hayez