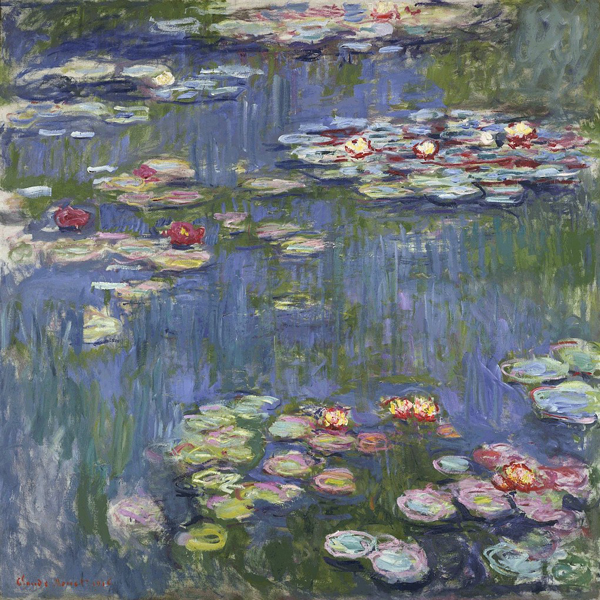 Water Lilies 1916 by Claude Monet is an iconic oil painting.

If you’re searching for Monet's famous paintings, it doesn’t get much more iconic than his famous Water Lilies paintings.

Measuring just over 200 by 201 centimeters, this is one of the smaller paintings of Claude Monet's Water Lily paintings. Despite this, the oil on canvas work sings with exuberance and movement, a perfect expression of Claude Monet and impressionist paintings.

Signed and dated by the artist on the lower left-hand side of the work, the painting depicts Monet’s famous lily-covered pond at Giverny.

How many paintings of Water Lilies are there?

Claud Monet painted over 250 oil paintings as part of his Water Lilies series. Indeed, these works entirely occupied the artist during the last decades of his life.

After turning fifty, Monet created his amazing beautiful garden and then devoted himself to painting it throughout the seasons. The water lily pond was a particular fascination.

Indeed, Monet employed a small brigade of gardeners to divert the nearby river to create the pond, surrounding it with weeping willows, exotic flowers, bamboo, and water lilies. Monet once said of his endeavors, “My finest masterpiece… is my garden”.

By 1916, Monet had worked on his water lily series for twenty years. This painting particularly expresses the delicacy of the flowers and the shifting watery shadows with a distinct combination of delicacy and boldness. Within these artistic innovations, Monet anticipated the Expressionist movement of future years.

In this painting, Monet concentrates exclusively on the surface of the pond. He doesn’t depict land or sky, only occasionally showing their reflections in the shifting water.

Throughout his career, Monet painted works on specific themes. The previous series included Haystacks, the Façade of Rouen Cathedral, and the paintings completed at the Valley of the Creuse.

Despite this, the water lilies at Giverny held particular allure. It’s unknown exactly why Monet chose to paint water lilies so obsessively, but the interplay of natural beauty, color, and artistic curiosity all played a part.

Speaking of the series, Monet once commented, “these landscapes of water and reflection have become an obsession.”

Monet’s later Water Lily paintings took place after the death of his wife Alice in 1911. Although, after this sad event, Monet’s compositions became larger, and he utilized brighter spots of colors and more expressive brushstrokes. Monet’s vibrant contrasting hues and brave painterly techniques are particularly evident in this painting.

Monet created many of the Water Lily paintings while suffering from cataracts. Cataracts are a degenerative problem impacting the eyes, where the lens becomes cloudy and reduces vision. Symptoms include blurred vision, halos around light sources, and faded colors.

These effects are plain to see in the progression of Monet’s paintings, with circular depictions of light and water and altered natural colors with a shifting, blurry atmosphere. Some of his latest works, for instance, Japanese Bridge (1918) make this deterioration even more apparent.

Ever since their creation, Monet’s Water Lilies paintings have remained incredibly popular. In 2007, one Water Lily painting sold for £18.5 million at Sotheby’s, London. The following year, another sold for almost £41 million at Christie's, London.

Where is the original Monet painting?

First displayed in 1924 at the “Exposition Claude Monet” at the Galeries Georges Petit, Paris, the painting (alongside other Claude Monet lily pads artworks) was an immediate success.

Monet's Monet Water Lilies 1916 now hangs in the National Museum of Western Art, Tokyo. Purchased in 1921 by Kojiro Matsukata, Kobe, it’s remained in Japan ever since.

Known and loved the world over, Claude Monet’s Water Lilies remains one of the most famous impressionist paintings and one of our most popular oil painting reproductions. 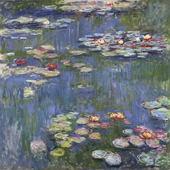