All Artists
L
LANDSEER, Edwin Henry
Monarch of The Glen 1851 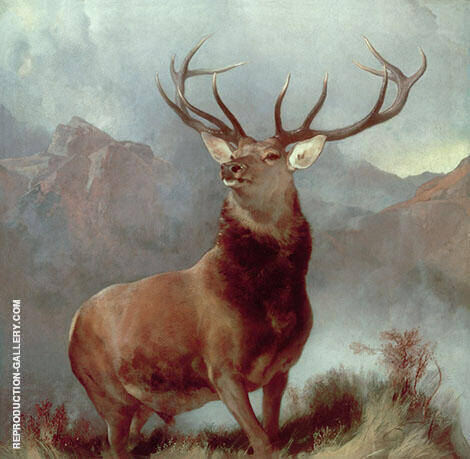 Sir Edwin Landseer Monarch of the Glen is one of the most famous oil on canvas paintings of all time.

When was the Monarch of the Glen painted?

Painted in 1851, the Monarch of the Glen painting depicts a red deer stag. Commissioned as part of a series of works destined for the Palace of Westminster in London, it’s an icon of Scotland and the Scottish landscape

Because of its unprecedented popularity however, the painting became increasingly controversial. Seen as a cliché and promoting “biscuit tin” stereotypes of Scottish wilderness, debates rage regarding its appropriate place in the popular imagination.

Described contrastingly as a “swirling storm of Victorian melodrama”, “cultural colonialism” and one of the most skilled animal paintings ever created, it’s a potent symbol of contested national identity.

The stag itself has antlers with twelve points. Referred to as a “royal stag”, it’s a fitting subject for the Palace of Westminster. The setting shows Glen Affric (a stunning area of outstanding national beauty) fifteen kilometers west of Loch Ness.

In the painting, the stag emerges from the heather-clad hills, clothed in highland mist and mystery. A powerfully composed and cleverly structured artwork, it lures the viewer ever closer towards the powerful and proud animal.

Ever since the day of its creation, the painting became one of the most discussed and reproduced visual icons in British art.

Why are Edwin Landseer paintings famous?

Sir Edwin Landseer (an Englishman) was a favorite painter of Queen Victoria. As a member of the prestigious Royal Academy of London, Landseer created many astounding depictions of animals.

Other famous Landseer animal artworks include the lions at the base of Nelson’s Column in Trafalgar Square, horses in The Arab Tent and the mystical scenery of Shakespeare’s Midsummer Night’s Dream. From the 1840s onwards however, Landseer created a series of paintings depicting stags.

Observed in incredible detail, the paintings emerged from Landseer’s regular sporting trips to the Scottish Highlands. They include stunning works such as The Highland Nurses and Highland Deer.

Problematically however, stag hunting by English upper classes played a fundamental role in the Highland Clearances. This adds an extra layer of meaning to the artwork, symbolizing rich Englishmen’s sports pursuits prioritized over Scottish lives. It’s no mere superficial image, but one with a rich and complex politically-charged history.

Despite its current popularity (and technical brilliance), Monarch of the Glen wasn’t initially well-received. Commissioned for the Refreshment Rooms of the House of Lords (in the Palace of Westminster), the House of Commons refused to pay for the artworks.

Whilst this reflected debates over funding more than a comment on Edwin Landseer paintings, it meant the artist never received the promised £150 payment. Consequently, the paintings (including Monarch of the Glen) went to private collectors.

Where is The Monarch of the Glen painting now?

The painting currently hangs in the National Galleries of Scotland, Edinburgh. They launched a well-publicized campaign in 2017 to purchase the artwork, raising £4 million for the sale.

Despite its current (rightful) place in the National Gallery, the painting has a fascinating sale history. Exhibited in 1851, 1874 and 1890, the painting slowly increased in fame. Owned by William Denison (1st Earl of Londesborough), it later passed to Henry Eaton (1st Baron Cheylesmore) in 1884.

On Henry Eaton’s death, it sold for £7,245 at Christie’s Auction House, London in 1892. After this, the painting passed-hands multiple times, before returning to Christie’s in 1916. Purchased by Pears Soap Company (for £5,250) it featured in much of their advertising.

Pears later sold the painting to John Dewar and Sons distillery, where the stag became their whisky trademark. This also inspired the Glenfiddich stag logo, still in use today.

In 1997, the British multinational beverage company Diageo purchased Dewar’s distillery. They loaned the artwork to the National Gallery of Scotland until 2016, when Diageo announced their intention to sell.

Although valued at £8 million, Diageo promised to sell Monarch of the Glen to the National Gallery of Scotland. For the deal, they just had to raise half the purchase price. This campaign was ultimately successful, securing the painting’s place for the nation.

Amongst famous paintings of animals by famous artists, Monarch of the Glen remains a classic image, as well as an ongoing yet conflicting source of Scottish identity.

The 19th century British artist Edwin Landseer was the most famous painter of his era. Landseer is known for his animal oil paintings, as well as for being an accomplished sculptor. The famous lions in Trafalgar Square in central London are his work. As a child prodigy, Landseer had paintings accepted at the Royal Academy at only 13 years old, and became a member in later life. He was Knighted by Queen Victoria and she also commissioned several paintings from him.

The most famous oil painting by Edwin Landseer has to be Monarch of the Glen 1851. Landseer’s paintings of dogs and horses are equally well-known. His painting entitled A Distinguished Member of The Humane Society 1838 depicts a Newfoundland Dog whilst Portrait of an Arab Mare with her Foal 1825 was a special commission oil painting requested by Princess Charlotte who was the eldest daughter of British King George III. 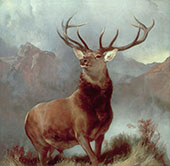 Monarch of The Glen 1851
By Edwin Henry Landseer