All Artists
R
RAPHAEL
The Holy Family with a Lamb 1507 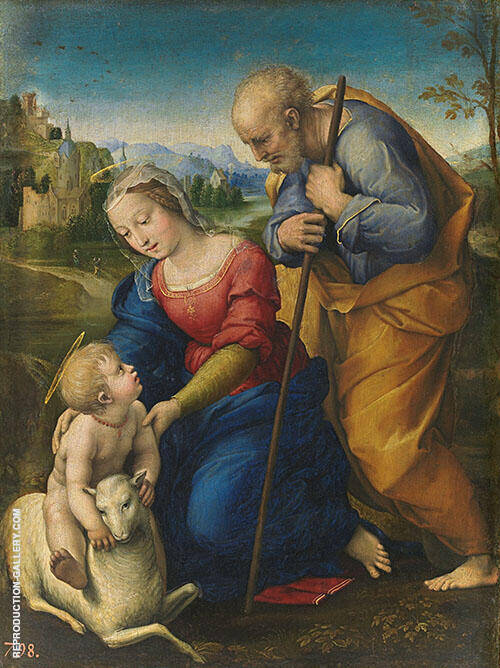 He was the son of Giovanni Santi di Pietro and Magia di Battista di Nicola Ciarla. Raphael spent his early years in the city of Urbino. It was a cultural and creative center with a remarkable historical legacy, and the perfect place for the aspiring young artist.

Raphael’s father, Giovani Santi, painted for the Duke of Urbino and he also owned a successful studio in the heart of the city. He introduced Raphael to the principles of classical painting and

In 1494, when Raphael was just 11 years old, his father died. In an astounding development, the young Raphael took on the management of his father’s art studio. Raphael’s skill and reputation quickly surpassed that of his father, with local artists and patrons alike becoming aware of his talent.

In 1550, the artist Perugino encouraged Raphael to visit him in Perugia and become his student. Perugia is a stunning town in the Umbria region of Italy and whilst there, Raphael assisted Perugino with his many large-scale commissions. Perugino was an influential force in Raphael’s early education and the apprenticeship lasted four years.

The young Raphael developed his own style during this period with his rapid progression apparent with early religious oil paintings such as St Sebastian (1501), Madonna and Child with Book (1502), and The Agony in the Garden (1504).

After Raphael left Perugino’s apprenticeship in 1504, he moved to cosmopolitan Florence. Here, he was inspired by the work of contemporary masters such as Michelangelo, Leonardo da Vinci and Fra Bartolomme.

Raphael never looked back and the young artist was astounded by their depth of composition and skill in draftsmanship. He consequently threw himself into studying their technique and developed his own, more intricate, and expressive personal style.

Building on the work of Leonardo da Vinci in particular, Raphael worked on a series of Madonnas. His stylistic progression is apparent through works such as Madonna Solly, Grande Madonna Cowper and Madonna of the Pinks. His experimentation with this biblical theme led to works such as Madonna of Meadow and Madonna of Goldfinch (1505); the latter demonstrating Raphael’s intense attention to detail, vivid coloring and endless ability to humanize this iconic subject.

The Duke of Urbino remained an influential patron during this time. Raphael painted an intriguing early work George and the Dragon (c.1505-6) to celebrate the Duke of Urbino’s Order of the Garter which was awarded in 1504 by Henry VII of England. The award reflected the close ties between the two countries which prevailed during the early sixteenth century.

After his experimentation with the Madonna theme, Raphael developed Michelangelo’s Battle of Cascina in a painting of the entombment. In 1508, at the invitation of Pope Julius II, Raphael moved to Rome. From this point onwards, Rome was a home away from home where Raphael toiled over his Vatican commissions, which resulted in a stunning series of frescoes.

Raphael famous paintings of this era include the Triumph of Religion and the famed School of Athens. The latter work touchingly reflects his father’s endeavors introducing Raphael to humanistic scholarship back in Urbino.

In the following years, Raphael painted many more frescos at the Vatican, employing multiple assistants and apprentices. He also continued experimenting with depictions of the Madonna during this period. The Sistine Madonna (1512) was one such painting. A work of truly stunning serenity and beauty, with Mary and the baby Jesus gazing directly from the canvas. They gracefully float amidst clouds, observed by two mischievous putti (cherubs) below.

Popular at this time, renaissance cherub paintings were usually naked chubby male children. Although previously associated with cupid and the passions, by the early sixteenth century they represented the sacred child, innocence and the omnipresence of God. A seemingly small detail, Raphael’s curious putti at the bottom of the Sistine Madonna are now among the most reproduced images of all time.

Raphael’s renaissance oil paintings are well known, but perhaps less well known is that fact that he also worked on architectural commissions. Whilst at the Vatican he met the banker Agostino Chigi. Chigi later became one of Raphael’s most important lay patrons. As well as frescos, he tasked Raphael with designing the Chigi Chapel in the church of Santa Maria del Popolo in 1513. The following year, Raphael took over from Bramante as the architectural commissioner of the new St Peter’s Basilica in Rome.

Despite infatuation with a young woman, a baker’s daughter, named Margherita Luti, in 1514 Raphael became engaged to Maria Bibbiena. Bibbiena was the niece of an influential cardinal and wealthy patron.

It is likely that Raphael likely agreed to the marriage after some persuasion, although he continued to paint Margherita Luti throughout the period. Raphael’s passion shines through and Luti is immortalized in La Donna Velata (translating as “the woman with the veil”), c.1516 and La Fornarina (Italian for “bakeress”), c. 1518.

Sadly, Bibbiena died in 1520 before the marriage took place. Raphael may have subsequently married Margherita Luti, but this unclear and remains speculation. His frescos for Villa Farnesina (commissioned by Chigi) certainly reflect the themes of love and marriage. This led some to wonder whether the pair wed in secret. Indeed, the romance, cherubins and bacchanalian excitement of works such as The Triumph of Galatea (part of the Villa Farnesina commission) underpin Raphael’s romantic infatuation during this period.

Raphael continued to paint frescos and further architectural works throughout the late 1510’s. His final painting was The Transfiguration (1516-20). Commissioned by Cardinal Giulio de Medici, it was a massive work on canvas. Destined for the altarpiece at the Narbonne Cathedral in France, it ultimately adorned Raphael’s coffin.

On April 6th, 1520, after a very short illness, Raphael died suddenly and unexpectedly. His death coincided with his 37th birthday.

A huge funeral procession was held across Rome, with Raphael’s funeral mass held at the Vatican itself. One biographer described the “tears of the whole city” at Raphael’s death.

The artist requested a burial in the Panetheon, alongside Maria Bibbiena. He also left a substantial amount of money to his beloved Margherita Luti.

Raphael’s move away from classical styles towards mannerism went on to influence Baroque art across the continent. His harmonious Madonna compositions also inspired religious art for centuries afterwards. Along with Da Vinci and Michelangelo, he remains a true master of Renaissance art.

The Holy Family with a Lamb 1507
By Raphael