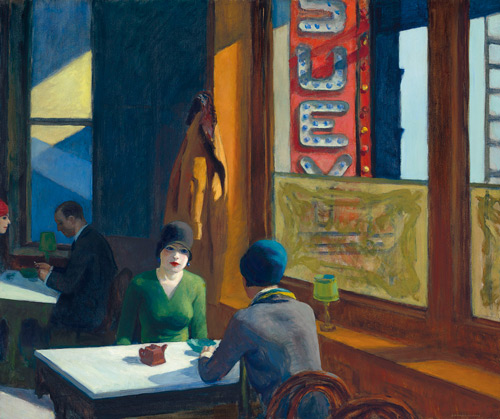 Edward Hopper Chop Suey is one of the artist's most famous and celebrated artworks.

When was Chop Suey created?

Its inspiration may have come from a second-floor Chinese restaurant in Columbus Circle, which the Hopper family frequently visited. This compositional focus of the woman's face (likely modeled on Joe, Edward hopper's wife) may provide a clue.   Jo Hopper often modeled for Hopper's paintings and is possibly even the muse for all three female figures in the painting.

Hopper’s lack of focus on the interior scene foregrounds the “art of the moment.” The painting is less about where the action takes place but about the experience of a unique moment in time.

Is there a meaning to Edward Hopper's Chop Suey

Like much of Edward Hopper's art, the exact meaning of Chop Suey remains ambiguous. Nonetheless, numerous details in the painting hint at the artist’s intentions.

As a brief description of the oil painting, two women sit at a table in the foreground. Another couple is just visible in the depths of the restaurant. The only features visible and painted in great detail are the woman's face, her partner's back, and the coat hanging above their heads.

Secondary items, for instance, the windows, restaurant sign, and teapot, all point towards a profoundly sensory experience of the restaurant. The window allows light to stream into the scene and encourages the viewer to imagine bustling sounds from the outside city street.

The couple in the background brings the restaurant scene to life, full of hushed conversations and rushing waiting staff. What's more, the woman’s oversized coat evokes a sense of texture, the tea invigorates our sense of taste, and the cigarette held by the man heightens the viewer's perception of the smell.

The central woman’s make-up is incredibly bold, highlighting her white skin, dark eyes, and red lips. The stark details of the sitter's face heighten a characteristic Hopper sense of detachment, creating an impression of a mask or doll rather than a realistic facial representation.

The two women’s clothes (tight sweaters and fashionable cloche hats) further suggest their concern with outward appearances while their inner life remains firmly out of reach.

What is the theme of Hopper's painting?

Paintings by Edward Hopper enjoy a celebrity for their realism and emotive power. Hopper's paintings present themes of isolation and urbanization, two emotions prevalent in twentieth-century America and even today.

Hopper’s paintings focus more on our inner world than specific narrative details. Chop Suey represents his focus on memory and sensory experience, depicted through the lens of loneliness and self-observation.

Although the painting represents a social environment, the woman’s face is mask-like. She doesn’t interact with her partner, merely staring at the viewer. Equally, the man in the background appears withdrawn from his female companion.

Each person remains isolated, locked within their inner world with the failure to truly “see” one another.

Despite this interpretation, some art historians argue the woman isn’t sitting with a partner. Instead, she faces her doppelgänger. Indeed, the two women wear remarkably similar hats, with similar body types and postures.

Whatever the “real” explanation, Hopper’s focus on sensory experience (light, sound, touch, and taste) removes the viewer from a purely realistic representation. Instead, Hopper encourages us to bring our meanings and memories to the artwork.

Hopper destroys the intricate details that a photographic artwork would provide by keeping some of the details loose and blurred. Instead, the painting becomes more realistic, forcing a direct partnership and collaboration with the viewing public.

How much are paintings by Edward Hopper worth?

The painting was promised to the Seattle Art Museum by Barney A Ebsworth upon his death. However, despite this promise, ownership passed to his estate.

In November 2018, a new selling price was set for Edward Hopper paintings when Chop Suey sold for a staggering $92 million.

Edward Hopper's famous paintings are some of the most sought-after artworks in the entire world.

Today, Chop Suey remains in a private collection, and the exact location is unknown.