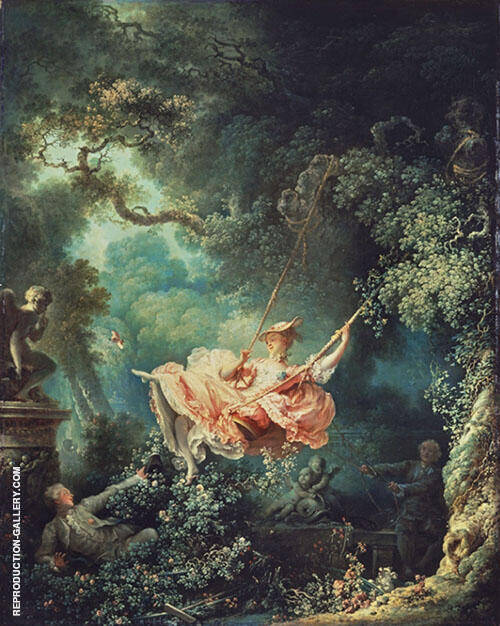 Painted in 1767, Jean Honoré Fragonard’s The Swing depicts an elegant and wealthy young woman perched atop a swing. Swaying to and forth with gleeful abandon, she kicks her shoe in the direction of a smiling young man below.

Also known as The Happy Accidents of the Swing, this painting is a true masterpiece of 19th century French art from the Rococo period.

Why did Jean Honoré Fragonard paint The Swing?

Amongst Fragonard paintings, The Swing is highly unusual. It presents an almost dreamlike setting, without the troubles and cares of everyday life.

Commissioned by an unknown courtier, the painting actually shows a courtly nobleman and his lover. The artist Gabriel François Doyen was initially asked to create the work, but refused as he was uncomfortable with the frivolous and scandalous subject matter. Fragonard subsequently received the commission.

Aside from the commission, Fragonard’s personal reasons for painting The Swing remain unknown. Despite this, its provocative undertones are obvious.

The vantage point (from which the young man views the woman) allows him to see directly up her billowing skirts. Indeed, his arm longingly stretches in this direction. She, in turn, appears illuminated by a brilliant shaft of light cutting through the otherwise gloomy woodland setting.

A smiling older man (just visible at the bottom right of the canvas) propels the woman. He’s seemingly unaware of her young suitor below. The original brief specified the swing should be propelled by a Bishop. Despite this, Fragonard depicted the older man as a simple layperson instead.

How big is The Swing by Fragonard?

The Swing measures at a surprisingly small 81 by 64 centimeters (that’s about 31 by 25 inches).

Despite its relatively small size, Fragonard includes an astounding array of detailing.

To list just some of these particulars, there are two statues in the painting. One statue watches from above the young man, with a finger covering its lips (a sign of silence, hinting at the affair). The other statue (a pair of putti or cherubs, perhaps a mocking nod to innocence) watches from near the older gentleman.

A small dog (a further ironic allusion to fidelity) barks at the lower right-hand corner. The gnarled trees, leaves, bushes and branches are additionally depicted with incredibly precise detail. This all adds to the dream-like effect of the painting.

Despite her opulent dress and silk slippers, the woman wears a shepherdess hat, known as a “bergère” in France. The style was popular amongst the upper classes. As a pastiche of working-class fashion it hints at class strife building in France at this time.

Is The Swing a Rococo style painting?

Considered one of the finest masterpieces of the, The Swing is also the most recognizable example of Fragonard art.

Jean Honoré Fragonard was a French Rococo painter. Less commonly referred to as “Late Baroque”, this style is exceptionally decorative and theatrical. It covers a wide range of endeavors, from art to architecture and theater; usually encompassing pastel colors, gliding curves, ornamental detailing and asymmetrical compositions.

Rococo style painting began in France as early as the 1730s. It reacted against the more formal classical style previously favored by the powerful French Academy of Arts. Despite its revolutionary beginnings, it quickly spread all over Europe, favored for decorating high-society private residences and even religious buildings.

As a true Rococo work of genius, The Swing painting hangs in the Wallace Collection in London, UK and is just one of our Jean-Honoré Fragonard oil painting reproductions.

Jean-Honore Fragonard. 19th century French artist known for his beautifully styled landscapes in the Rococo manner. He was a prolific artist producing over 550 paintings in his lifetime. Fragonard was born in the South of France and went to Paris to study with Francois Boucher. He went on to study in Rome for 3 years and upon his return, one of his paintings was purchased by the King of France. Fragonard painted for the wealthy Royal courtiers and his work was much in demand.

Are you looking for a French Rococo oil painting. Take a moment to browse our Rococo reproduction paintings and our Jean-Honore Fragonard oil painting replicas.

Fragonard’s most famous work, the Swing, is held in London by the Wallace Collection.

Fair at Saint-Cloud (also known as La Fete a Saint-Cloud) is a large scale oil painting also painted by Fragonard towards the end of the 18th century.

The Swing
By Jean Honore Fragonard