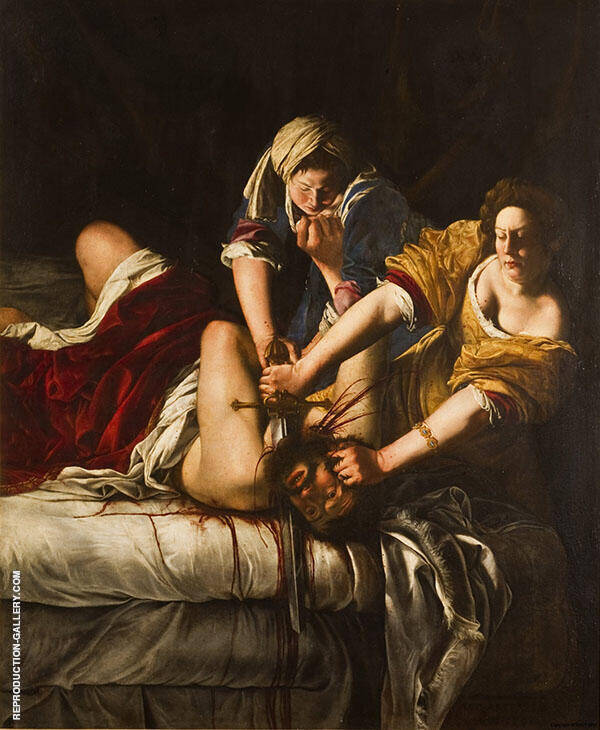 Depicting a story from the apocryphal Book of Judith (from the Old Testament), the painting represents the assassination of the great Assyrian general Holofernes. Judith (the Israelite heroine of the narrative) performs the murder.

Gentileschi’s painting depicts the exact moment she severs Holofernes’ neck. Assisted by her maidservant (Abra), Judith beheads Holofernes whilst he sleeps in a deep, drunken slumber.

The second version currently hangs in the Uffizi Gallery, Florence. The original artwork resides at the Museo Capodimonte, Naples.

Gentileschi created Judith Slaying Holofernes to illustrate the biblical story of the assassination of the Assyrian general Holofernes. The painting depicts the climactic point of the story when the actual beheading takes place.

Despite being one of the most famous religious paintings of all time, the artwork is unabashedly physical. Indeed, Gentileschi portrays the wide spurts of blood coming from Holofernes neck and onto the crisp white sheets.

The womens’ strong effort is plain to see. Judith grasps Holofernes’ hair, whilst Abra holds the large man down. Abra’s petite size contrasts with his large hand, desperately struggling against her red dress. His eyes glaze past the viewer, half in desperation, half already in the throes of death.

Both women have their sleeves rolled up, as if hard at work. The primary color of their dresses contrasts strongly with the dark background. As a keen follower of Caravaggio, Gentileschi utilizes chiaroscuro to great effect, with light directly illuminating the faces of the three protagonists.

What is the story behind Judith and Holofernes?

Aside from the biblical narrative, many art historians read a deeper personal meaning into the artwork. It fits with the broader tradition of Artemisia Gentileschi paintings depicting strong women.

The painting could also be a form of “visual revenge” from the artist. Raped in 1611 by Agostino Tassi (a fellow Italian painter), it could represent Gentileschi’s own anger against the male sex.

Previously accused of raping his sister-in-law, one of his wives and attempting to murder his present wife, Tassi only received a two year sentence. This verdict was annulled however. By 1613 (the time this painting was likely completed) he was at liberty again.

Consequently, many scholars link the painting to the “power of women” theme. This includes womanly wiles, the trials and tribulations of marriage and female domination over men. In Gentileschi’s painting, Judith is a fiercely beautiful woman, enticing Holofernes to his eventual doom.

What was unusual about Artemisia Gentileschi's Judith and Holofernes?

Renaissance painters frequently depicted this fascinating biblical narrative. Despite this, Gentileschi’s painting stands out for its pure physicality and emotional impact.

Of course, it is also unusual for its female author. Amongst the great painters tackling the theme, including Titian, Peter Paul Rubens and Rembrandt, Gentileschi was the only woman to depict this iconic scene.

Many Renaissance large oil paintings on canvas (created by some of the most famous artists of all time) represented Judith in her endeavors. For instance, Lucas Cranach the Elder painted Judith with the Head of Holofernes (c.1520-40). In this version, there is no vividly gushing blood. The act of beheading has already taken place.

Donatello also created a sculpture of the act, with Judith towering over Holofernes’ body (sword in hand), just about to undertake the deed. In this version, Holofernes strongly represented the sin of arrogance. Indeed, Donatello’s inscription simply reads “Behold the neck of pride.”

Ultimately, Judith Slaying Holofernes by Artemisia Gentileschi remains one of the most striking and extraordinary representations of this biblical scene ever created.