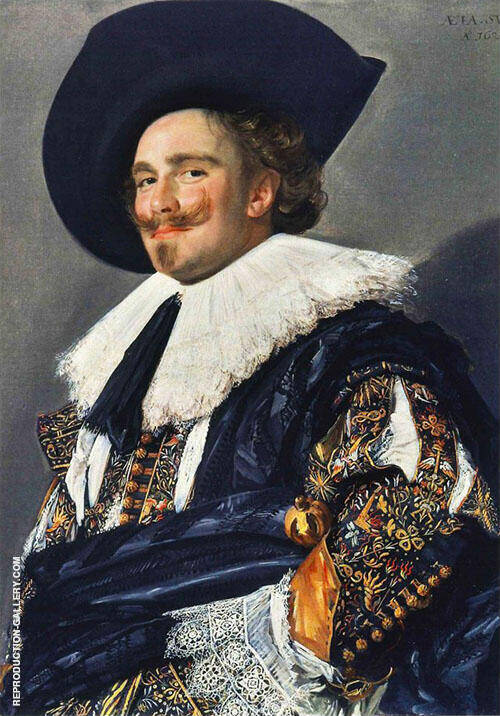 The Laughing Cavalier by Franz Hals, painted in 1624 is the artist's most famous portrait painting.

Frans Hals is one of the most celebrated Dutch Golden Age artists, renowned for his portraiture and genre painting.

Painted in 1624, the Laughing Cavalier is one of the most brilliant examples of Baroque portraits of all time.

His composition is lively and spontaneous, with vivid colors, careful attention to texture, and costume, all superbly depicted with flowing, fluid accuracy.

The artist’s unusual viewpoint (painting the sitter from a low perspective) creates a feeling of monumentality. This unique perspective and the man’s slightly turning posture features in other Frans Hals paintings. Similar compositional devices appear in Portrait of a Man (1630) and Official Sentado (1631).

In all these works, the sitter looks down on the viewer, eyes glinting with life and curiosity.

As well as monumentalizing his subjects, the unique viewpoint allows Hals to emphasize the rapid brushwork on the man’s sleeve and lace cuff.

Frans Hals’ bravura brushstrokes are beautiful in their own right. However, they also add to the careful realism of the portrait, one of the many reasons it remains so loved today.

Why did Frans Hals’ painting get its name?

There is little written evidence of the Laughing Cavalier painting before 1770.

Described in an 1865 Paris auction catalog as Portrait d’un Homme (“Portrait of a Man”), it later appeared in Richard Seymour-Conway, 4th Marquess of Hertford’s collection.

The Laughing Cavalier title appeared in the 1880s, over two hundred years after the painting’s creation.

The simple title appealed to the sensibilities of the Victorian public, and the exhibition (with its enigmatic cavalier) was an immediate success.

Exhibited again at the Royal Academy in 1888, the portrait received its now well-known byname of the Laughing Cavalier.

It comes as no surprise that many people have subsequently queried this title. Indeed, the man is neither laughing nor cavalier. Yet, despite this, his knowing smile, opulent dress, and upturned mustache all add to a sense of cultured levity.

It was highly unusual for paintings of this period to show adults smiling. However, Frans Hals was unique. Broad smiles and relaxed postures feature in other Hals' portrait paintings, Yonker Ramp and his Sweetheart (1623) and The Mulatto (1627).

Was the Cavalier a real person?

The exact identity of the sitter is unknown.

We do know (from an inscription on the painting itself, reading “aetatis suae 26, anno 1624”) that the man was twenty-six years old.

Despite the military title, the man was likely a wealthy Dutch civilian. The Art Historian Pieter Biesboer suggested Tieleman Roosterman (a cloth merchant who’d sat for Hals before) as a possible candidate.  However, his identity remains a mystery.