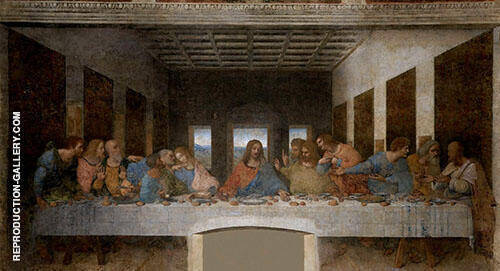 The Last Supper by Leonardo da Vinci is one of the greatest and most famous Renaissance oil paintings of all time.

Known in Italian as L’Ultima Cena, it’s a mural measuring over eight by four meters in size. Aside from the decorations in the Sala delle Asse in Milan, The Last Supper is Leonardo’s largest painting.

Painted between 1495 and 1598, it represents the biblical story of the final meal of Jesus. As told in several gospel accounts, this was the last supper Jesus shared with his apostles before his crucifixion.

What is the meaning of The Last Supper painting?

The exact instant represented in Da Vinci’s Last Supper is the moment immediately after Jesus declares one of his twelve apostles will betray him.

Da Vinci portrays the reaction of each disciple to the shocking news. Some react with anger, sadness, or surprise, yet others attempt to remonstrate or plead with Christ. Due to the complexity of the painting, it’s worthwhile examining each group in turn.

The group on the right-hand side of the artwork is Matthew, Jude Thaddeus, and Simon the Canaanite. Matthew and Jude turn towards Simon, seeking his explanation for Jesus’s strange and frightening prediction.

Moving closer to Jesus, the next group of three are James the Greater, Philip, and Thomas. While Philip gestures for more explanation, James sits in stunned silence. Thomas’s finger points towards the sky, foreshadowing Jesus’s later resurrection.

Of course, in the center of the composition is Jesus Christ himself. His palms are open in holy supplication, and his face is a picture of resigned serenity.

Moving towards the left of the composition, the next group comprises Judas Iscariot, John, and Peter. Judas (the disciple set to commit the ultimate betrayal) is nearest to the viewer. His head is the lowest of everyone in the painting, and he clutches a small bag referencing the thirty pieces of silver rewarding his perfidy.

Judas is in the shadows and darkness, in stark contrast to the luminosity of the other figures. Contrasting with the other apostles, Peter appears angry (foreshadowing his violent actions in Gethsemane). He also touches the “beloved disciple” John on the shoulder, prompting John to ask Jesus about the identity of the disciple set to betray him.

Finally, the group at the far left is Bartholomew, Andrew, and James (son of Alphaeus). All three react with extreme distress.

Why is Da Vinci’s painting so famous?

The Last Supper is renowned among Leonardo da Vinci's famous paintings. Da Vinci’s complete proficiency in space and perspective and the presentation of motion and emotion have secured the work’s place in the canon of Western art.

Indeed, Jesus’s right cheek is at the exact vanishing point of multiple perspective lines. All the angles and lighting draw the viewer’s attention back to Jesus Christ time and time again. Christ’s downward gaze directs the viewer’s sight along his left arm and towards the bread set to identify Judas.

The painting also marks the shift from the Early to the High Renaissance within Italian art. Leonardo’s artwork prioritized the intensity of color and the juxtaposition of light and shade (known as chiaroscuro). This technique is particularly evident in The Last Supper, with dark recesses contrasting with the white walls of the foreground and the disciple’s vibrant jewel-toned robes.

The painting broadly references traditional Last Supper depictions in its composition. For example, all the disciples sit on one side of the table to see their faces.

Da Vinci places Judas amid his fellow disciples, unlike most famous religious paintings. Judas would have been the only character sitting alone on the opposite side of the table. Da Vinci’s compositional change allowed the artist to show Judas reaching out for bread simultaneously with Jesus.

As well as the astounding artistic skill on display, The Last Supper is also famous for the many controversies and conspiracy theories surrounding the work.

What is the hidden message in Da Vinci's most famous painting?

The Last Supper fresco is one of the most widely debated paintings in the world. Claims about hidden messages and hints within the painting abound, particularly in the aftermath of Dan Brown’s The Da Vinci Code (published in 2003).

One of the most famous theories suggests the person immediately to the left of Jesus is Mary Magdalene. This theory further identifies a letter M in the center of the painting, representing “Matrimonio” (marriage) or Mary Magdalene herself.

Art Historians generally agree this figure is the Apostle John, however. He appears feminine due to Leonardo’s characteristic style and use of soft sfumato. Other Da Vinci works, such as Saint John the Baptist (for instance), have similarly feminine features.

The Last Supper also contains several references to the number three and the Fibonacci series, including the disciples seated in groups of three and Jesus’s posture resembling a triangle.

In a similarly controversial manner, Da Vinci’s fresco doesn’t depict Jesus and his disciples with halos. But, again, this could be a heretical allusion to their status as mere mortals and common people instead of divinely inspired figures.

Why is The Last Supper in a ruined condition?

The Duke of Milan commissioned the mural to form part of grand renovations to the Santa Maria delle Grazie church.

By the mid-1490s, Leonardo Da Vinci was already an acclaimed artist in high demand. However, his busy schedule meant work progressed slowly over several years.

Indeed, one story relates that a Prior complained to Leonardo about the prolonged delays in completing the painting.  The remark infuriated Leonardo, who claimed he'd struggled to find a sufficiently villainous face for Judas, sarcastically adding he’d considered using the nagging Prior’s likeness.

While the truth of this tale is uncertain, we know Leonardo used materials such as pitch, mastic, and tempera on gesso, allowing for constant changes and revision over time.

Sadly, however, these artistic materials meant the mural disintegrated quickly. As a result, very little of Leonardo’s original work remains combined with environmental factors and intentional damage. Even with many dedicated restoration attempts, this iconic Da Vinci painting is now in disrepair.